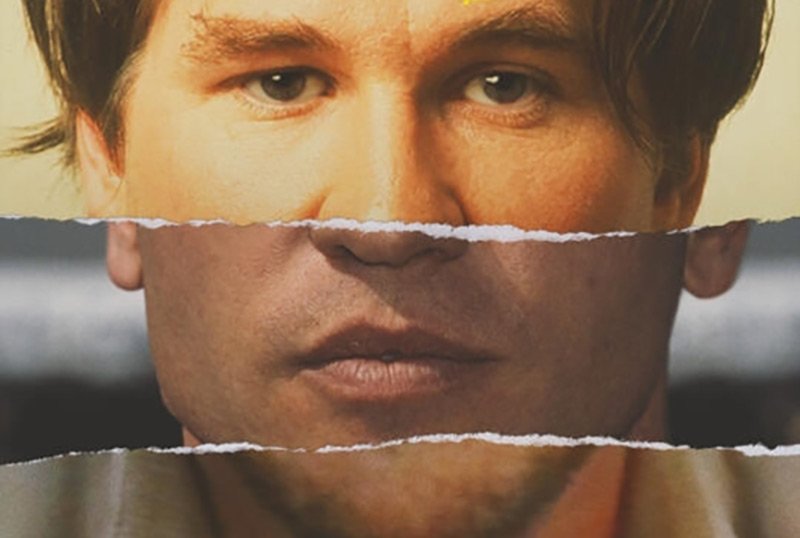 (Ting Poo, Leo Scott and Val Kilmer’s documentary about Val Kilmer, entitled Val is in theaters now and streaming on Amazon Prime. Like what you see here on Hammer to Nail? Why not give just $1.00 per month via Patreon to help keep us going?)

Actor and artist Val Kilmer is one of those faces that seem to have been around forever. Like many great, younger actors his output has somewhat decreased as he’s aged and through his new and interesting documentary Val, we discover myriad reasons why. Upon its surface, Val is a bit of a tribute film and that in and of itself creates issues as all footage in the film (spanning his entire life) is or was shot by Val Kilmer himself or his son, Jack. While the film has director credits listed to Ting Poo and Leo Scott, the doc is a movie about Val Kilmer made by Val Kilmer. What comes across in the finished film is a portrait of a complicated, talented, narcissistic and perhaps an older-is-wise man who has come to realize his time in the spotlight and maybe even on earth, may have been squandered in some ways. It’s a memorable and touching film. However, when a featured artist controls the entire narrative of his or her life story, can Val truly be considered a “documentary” or is it more of a personal memoir?

Val opens with a young and lean Kilmer goofing off in his trailer on-set with some fellow actors. Kilmer is fun and funny, over the top and bratty, in many ways the scene encapsulates what made him such a star. From there, we flashback back to a young, idyllic life in California’s sprawling San Fernando Valley where Kilmer whiles away the days on Roy Rogers’ former ranch making films, plays and cartoons alongside his two brothers, the younger of which was a true kindred spirit to young Val’s burgeoning talent as a performer. Yet as young life marches towards adulthood, things begin to crumble due to the Kilmers’ nasty divorce and custody dispute and the truly tragic death of Kilmer’s aforementioned younger brother.

While dealing with the fallout of the latter, Val becomes the youngest person ever admitted to Julliard. He attends alongside Sean Penn and Kevin Bacon which is revealed as Kilmer explains how he had his sights set on the lead in a play only to lose not only that slot but also the second slot to Penn and Bacon. Instead, Kilmer is cast in a more comic relief type role and it’s unclear as to the motives behind including this in Val as like any person writing their own narrative, they typically don’t see all sides of a situation, only theirs. Yet it does plant a seed as throughout his career, a theme evolves of Kilmer not getting his due mixed with simmering resentment. Is Kilmer admitting now he may have been better suited as a great character actor or second (or even third) lead or is he angry he was rarely given his due? Questions like this intrigue and make for interesting conversations even if the answers are never clear.

It’s important to note that Kilmer is currently unable to eat or speak without the help of a breathing tube due to successfully defeating throat cancer in in 2017. This too adds sorrow and empathy to Val Kilmer as it’s painful to see such an iconic actor struggle physically. While easily exhausted, there’s still a sparkle in his eye and Kilmer maintains much of his charming, silly nature, even though it’s also clear he regrets not being able to act onscreen any longer. Yet this too becomes a bit mired in the overall Val experience as his feelings are never explicitly laid out, we only get touches of clarity either through voiceover or the shots onscreen.

Without going down a laundry list of how Val plays out, we witness Kilmer’s career, we follow along as he marries Joanne Whalley and has two children. The eldest, Mercedes appears frequently in the film (and, currently lives next door to her dad) and son Jack provides much of the voiceover in the film by reading lines Val has written for him to say. Much of this dialogue has tinges of regret or remorse but the accompanying images onscreen either belies this or is showing us the real truth. For example, when Mercedes is born, Val is a loving and effusive father. Yet in one shot, Kilmer is filming his baby daughter as she sits in a playpen and he slowly pans up to a reflection of himself in the mirror on a dangling mobile above his daughter. He hesitates here for a few seconds, looking at himself. We clearly see it’s Val Kilmer in his younger, more handsome days. But, why is he filming himself here and why is this shot in the “doc?” There’s tons of “look at me!” throughout and while Kilmer has always been charismatic are we to understand that those days are over due to deteriorating health or are we to applaud an actor showing us what he wants us to see of himself?

It’s well-known Kilmer was difficult to work with and if you feel that’s just a rumor, I encourage you to watch the excellent documentary Lost Soul: The Doomed Journey of Richard Stanley’s Island of Dr. Moreau. In this doc, which is much more unflinching than anything in Val, we witness Kilmer, Marlon Brando and to some extent David Thewlis drive director Richard Stanley to a nervous breakdown on the set of their ill-advised remake Island of Dr. Moreau in 1996. In that doc, we see Kilmer and Brando flat out refuse to perform for Stanley and ignore his direction. As such, the films budget balloons out of control and Stanley eventually is forced to leave after being rendered useless by his leads. Yet as the story is recounted in Val, Stanley simply “left the production halfway through’ and is replaced by John Frankenheimer who, as we quickly see here, is equally abused and treated shabbily by Kilmer. This is just one example of the issues that arise when a documentarian is beholden to things other than the truth of a story. It reminds me of once great documentarian Joe Berlinger’s recent output such as “documentaries” on Metallica and self-helper Tony Robbins in which the subjects have say in the final product. These are informercials, not documentaries.

I won’t beat around the bush here, Val Kilmer is a narcissist. This isn’t a bad thing necessarily as many actors, musicians and artists are and for good reason. They spend a majority of their lives being doted upon and living in pretty unnatural circumstances. But what kind of sticks in my craw is whether or not Kilmer feels bad for the way he treated people around him. He also doth protest too much as in a montage of interviews from his career following (truly outstanding) performances in The Doors, Thunderheart, Tombstone and Heat, Kilmer again and again bites the hands that feed him by accepting roles and then bitching about the script, typically in interviews designed to sell the movie. Late in the film Kilmer is forced to sell 6,000 acres of land he bought in New Mexico, he wanted to create an artist community. But now he’s forced to live out his days in a large house in Malibu. Bummer, dude.

So, which is it? Is Val the portrait of a once highly valued actor who has fallen from grace, been decimated by an awful health issue and thus knocked down a few pegs to become a more humble man? Or is Val the portrait of a famous actor who never really got his due and now never will because of an inability to use his voice? Are we to feel bad for him or happy he has kept us so entertained over the years? It’s unclear and admittedly, this makes Val even more interesting as perhaps both coexist