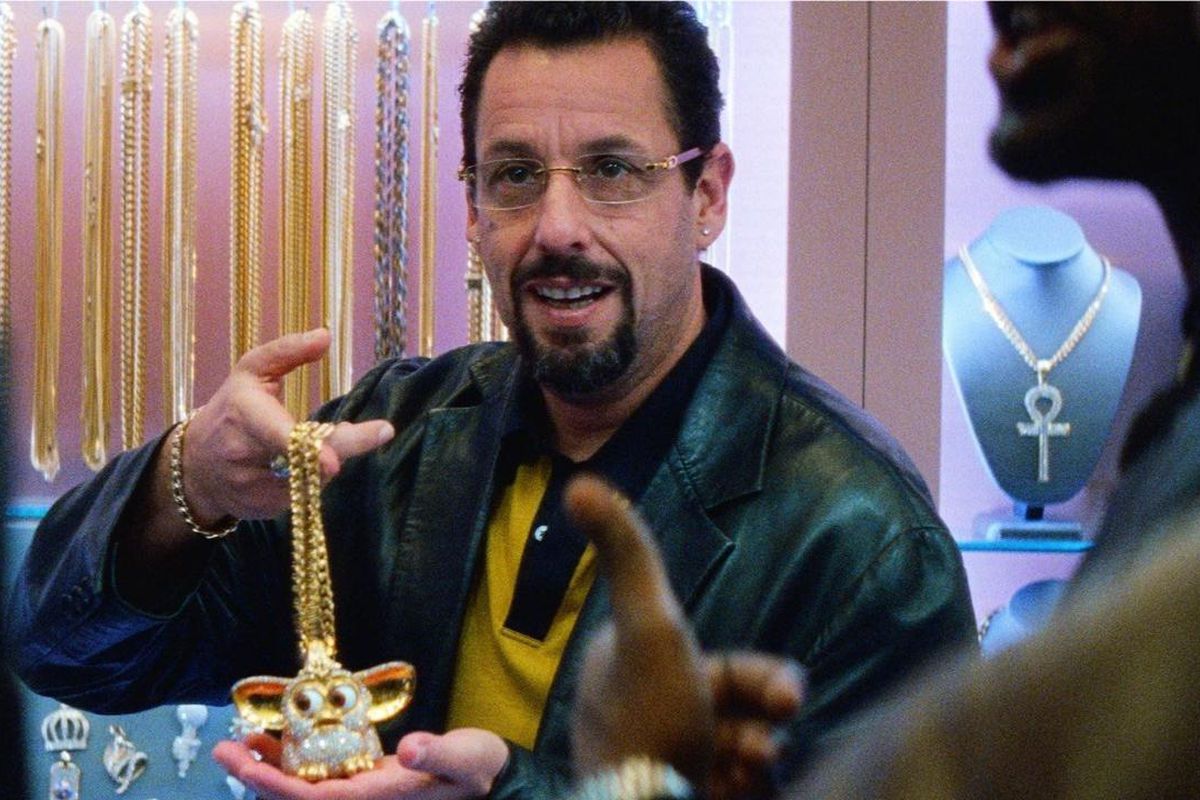 The Safdie Brothers make films with an unabashed audacity that spills over into their characters. The directors are known for their restless camera and fast-paced New York City dialogue that tends to be shouted by the unlucky inhabitants of their bizarro worlds. Adam Sandler (Punch Drunk Love) is pretty good at shouting, even if sometimes his voice verges on Gilbert Godfrey-esque. The shouting that pervades most scenes is frequently funny, but what makes Uncut Gems Sandler’s best performance to date is the quieter moments. His Howard is a desperate man, and it’s never clearer than in a scene between him and his soon-to-be ex-wife (Idina Menzel) after Passover Seder with the extended family. Howard is unwaveringly confident about his many dubious schemes, but when it comes to convincing his wife to stay in a dysfunctional marriage, we see his vulnerability shine through. It’s those smaller moments in between the chaos that prove most pivotal to the success of the story.

Howard barely blinks when pawning Kevin Garnett’s (playing himself) NBA championship ring minutes after it was bestowed to him to safeguard, in exchange for a large magical stone filled with black opals. He squabbles with Demany (Lakeith Stanfield), a fellow hustler who brings in the A-list clientele, and Julia (Julia Fox) who helps him keep his affairs in order, while managing an affair of their own. Most of the characters are likable, if not a tad annoying, but Julia proves to be loyal and a game partner for Howard’s shenanigans. Unlike his wife, she doesn’t mind that he’s a gambling addict. He owes debts all over town, and everybody is trying to collect. But he has a special relationship with his biggest debtor, which I won’t spoil here. It’s one of many pleasant and unpleasant surprises the Safdies pack into their 135-minute runtime. Thanks to their relentless pacing it feels like 90, in a good way.

The Safdie’s usual cinematographer, Sean Price Williams, has been replaced here by Darius Khondji (Amour), but they’ve maintained their adulation for neon colors as evidenced by Demany’s bright orange hoodie that glows blindingly bright in a scene under a black-light in a nightclub. That hoodie may not become as iconic as Robert Pattinson’s Ecko hoodie in Good Time, but still give the costume designer Miyako Bellizzi credit for such a bold visual choice. Another stylistic flourish comes right in the beginning when Garnett first gets his hands on the magical stone. We see a dizzying montage of African imagery, spirit animals, and basketball highlights that are meant to represent a type of athletic-aphrodisiac. Howard is similarly aroused by this rock, though he mainly talks about ‘cumming’ in financial terms. The supporting cast is exemplary—especially Menzel as the wife and Keith Williams Richards as frighteningly believable muscle—but Sandler is the main event, and the audience is rooting for him to win even though we know the odds are stacked against him.

In Uncut Gems, the Safdies once again capture the anger and intensity of Manhattan with the humor and heart only a couple of real New Yorkers could. The film is more polished narratively than anything else in their oeuvre, though it’s worth pointing out that the script was ten years in the making. It seems like this one was the one they’ve always been destined to make—a culmination of their work. Howard may be unlucky, but Sandler is fortunate enough to fall into this awards-worthy role at the pinnacle of the Safdie’s career.