(Traffic won four Academy Awards in 2000, including Best Director. It is now available on DVD

and Blu-ray via Criterion.)

Traffic doesn’t discriminate. Its interwoven narrative threads may be seen through color-coded filters, but the story they come together to form equalizes the sprawling array of characters. A tale of the US-Mexico drug war with a concern for how addiction and a desire for more—drugs, money, power, what have you—seep into the lives of bystanders and instigators alike, Steven Soderbergh’s 150-minute opus features as many victims on one side of the border as it does on the other. Consider the newly-appointed drug czar who, in addition to needing a glass of scotch every night before dinner, is father to a 16-year-old daughter slowly losing herself to heroin; the chain-smoking DEA agent who doubts the efficacy of the nicotine patch; or the Tijuanan cop whose sense of self erodes as he navigates the grey area between each side of the conflict. Soderbergh sees the various maladies his characters suffer from (and, to a lesser extent, enjoy) as existing on a sliding scale with no clear-cut answers as to what constitutes right and wrong in a sociopolitical landscape as harsh as this one. The real differences between those mired in its uncertainty  initially seem limited to chance, to accident of birth, but each participant eventually shows his or her true colors. Soderbergh sets his sights high and wide, but for the most part avoids linking these men and women via tenuous, self-reflexive moments: every connection feels earned rather than incidental.

What most impresses about this approach is its avoidance of grandstanding. This isn’t a sermon or lecture but rather a surprisingly humble look at something that’s often given a grandiose, “gritty” treatment in service of lofty and unrealistic notions. Characters aren’t prone to speechifying or undergoing well-timed epiphanies, and little feels contrived. Traffic is understated without feeling calculated, which is to say that its subtlety doesn’t feel born of pretense or a desire to hide what it has to say behind an insincere veil of modesty. Soderbergh keys us in to the particulars of the plot via color and mood rather than the drawn-out exposition we might expect from such a long, multilayered film; in so doing, he allows his visual motifs to tell a story of their own. Colors are signposts in an otherwise uncharted land. Borders of all kind—national, legal, moral—are crossed, each of them irrevocable: the longer the film goes on, the less distinct its tri-color structure becomes. Things blur into each other as they’re muddled and more and more people get their hands dirty. Even so, there’s no judgement to be found here—just the sense that the machinations of this trade makes victims of all its players sooner or later. Few deserve our scorn, even fewer our admiration. The characters, like the film itself, live in the real world, and for all the tinkering with color to be found here, there isn’t a single rose-tinted image in the entire film. Hindsight makes it all appear grey and ugly. 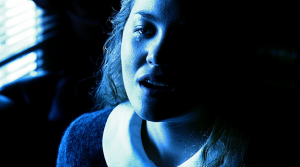 If, in the end, this doesn’t amount to a sweeping gesture or overarching statement, all the better. Traffic concerns itself with what could kindly be called a zero-sum effort or, more gloomily, an ill-conceived attempt at improving a sordid state of affairs. That the just- and soon-to-be-released El Sicario, Room 164 and Miss Bala provide even more explicitly dispiriting (albeit microcosmic) looks at the same subject a full decade later may be read as cinematic proof of how futile the efforts of so many in this film ultimately are. It’s a large story built on small moments that are often as devastating on their own as they are in tandem with one another. This can leave one feeling unsatisfied, but in a way that feels earned: an excess of resolution can be poison to a story as sprawling as this. The film’s reality is far from heightened, its implications all too real.

Audio/Visual: As with their recent release of the Three Colors trilogy, Criterion have put together a careful Blu-ray transfer of a film whose deliberate use of color is as important thematically as it is aesthetically. The washed-out streets of Mexico and icy-blue halls of Washington, D.C. are equally well-presented here, with a depth and sharpness that manage not to undercut the soft, sometimes blurred feeling evoked by the setting(s). Traffic‘s look is not only pretty but fascinating, with the above-mentioned visual cues playing a vital role.  The 5.1 audio track helps flesh out not only the multilingual dialogue but also frequent Soderbergh collaborator Cliff Martinez’s score, which is so well-integrated into the mix that it sometimes runs the risk of going unnoticed. Each aural element is noticeable without being overly so; everything meshes together quite nicely.

Supplements: Three different commentary tracks, a gallery of trading cards, 25 deleted scenes, 45 minutes of unused footage, seven different trailers, and demonstrations on the film processing and editing techniques. All of these underscore just how vast the film’s scope is, with the deleted scenes and unused footage drawing particular attention to how well-edited and controlled it is as well. For all its many parts, the film is never ungainly—a feat unto itself.