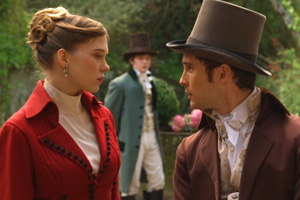 Mysteries of Lisbon (Music Box Films) — In 19th-century Portugal, João, an orphan being raised in a church-run boarding school, sets out to learn the secret of his parentage. That mystery gets cleared up fairly early on, but the story of João’s parents leads to new stories and new mysteries: the priest who helped save young João, the assassin sent to kill him, the nobleman tricked into a loveless marriage, the noblewoman obsessed with avenging a past hurt—all these lives and many others weave their way in and out of Raul Ruiz’s vast tapestry. The soap-operatic tale, adapted from an 1854 novel by Camilo Castelo Branco, teems with startling revelations and sudden reversals, multiple changes of identity, fortunes gained and lost, dream sequences, flashbacks within flashbacks: a virtual anthology of melodramatic plot devices and narrative flourishes. In nearly every scene, Ruiz knowingly teases us by exaggerating the contrivances, coincidences, and bald-faced implausibilities of the plot and foregrounding the artifice involved in creating this fictional world—and yet, for all his postmodern gamesmanship, he somehow manages to make the whole thing utterly captivating on the level of old-fashioned, what-happens-next storytelling, like a magician showing us how he put his tricks together and enchanting us even more by doing so. The film is nearly five hours long including intermission, but it’s swift and sure-footed from the first scene to the last. (Nelson Kim) Available on DVD

Life 2.0 (Virgil Films and Entertainment) — A double-feature of Jason Spingarn-Koff’s Life 2.0 and Ariel Shulman and Henry Joost’s Catfish would make for a seriously dirty excursion. For those of you who participate in the Second Life phenomenon, I am f**king scared of you. Spingarn-Koff isn’t overtly obnoxious in his condemnation of the SL lifestyle, but he certainly went out of his way to find participants whose hobbies have become more than just time-sucking obsessions (or is there no such thing as a casual Second Lifer?). Particularly fascinating is watching one of these SL couples connect in real life, breaking up their families in the process, only to realize that their human manifestations are no match for their perfectly aligned avatars. Grody to the max. Available on DVD

Traffic (Criterion) — Traffic doesn’t discriminate. Its interwoven narrative threads may be seen through color-coded filters, but the story they come together to form equalizes the sprawling array of characters. A tale of the US-Mexico drug war with a concern for how addiction and a desire for more—drugs, money, power, what have you—seep into the lives of bystanders and instigators alike, Steven Soderbergh’s 150-minute opus features as many victims on one side of the border as it does on the other. Read Michael Nordine’s full HTN review. Available on DVD

The Ides of March (Sony) — Available on DVD

License to Drive (Starz/ Anchor Bay) — Truth be told, I call this movie anything other than I wild card. I call it a sure shot. But that’s because I was 14 when I saw it. Available on Blu-ray