(The Three Colors trilogy was released in 1993-94. It is now available on DVD

There’s an underlying connectivity to Three Colors that should probably feel contrived. It flows through characters and situations like an electrical current, not uniting them so much as informing the viewer that, even if tenuously and in a way they themselves aren’t always aware of, these men and women have something in common. Often it’s a shared loneliness that each character thinks is his or hers alone. They may be connected, but they’re far from bound to one another—especially since the viewer is often the only one who sees the ways in which they’re of a piece. The films themselves are aware of this irony, and exploit it to its fullest, sometimes darkly comical effect. Krzysztof Kieślowski was so elusive a filmmaker that, even when drawing together a large cast of heretofore disparate characters in one climactic scene, he still managed to leave much unresolved, treating moments of revelation the way others handle lingering mystery and doubt. Nothing is definitive, nothing a terminal point. Everything branches out into something else but, rather than frustrate, this epistemological playfulness serves to further intrigue. With each step we take toward understanding the trilogy, it moves further away. That this long process never grows tiresome is but one of the reasons the trilogy is so worth returning to.

Since it naturally requires watching all three films to fully absorb the extent of the connections threaded throughout, there’s a cumulative effect upon finishing the cycle that retroactively alters one’s perception of each component. Watching White changes how one conceives of Blue, watching Red changes how one conceives of White, and re-watching the entire triptych changes how one conceives of its maker’s entire oeuvre. Kieślowski wants us on our toes, but the ponderousness that accompanies his films is never idle or self-indulgent. This is very much an active experience, and its rewards are many: the feeling we get the first time we see a previous event through a different set of eyes, for instance, or the lasting wonder that accompanies its many unanswered questions. 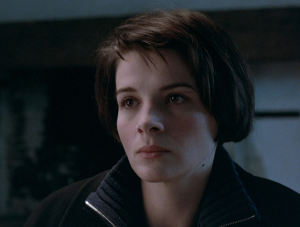 Kieślowski’s use of—and, particularly in Blue, emphasis on—music makes it easy to think of his trilogy as something of a symphony. When his characters can’t find the right words, which is often, he lets Zbigniew Presner’s massive score express what they either can’t or won’t. An incomplete composition is one of the key set pieces of the film, and its operatic bravado is in stark contrast to the woman who knows it best. “Why are you crying?” the recently-widowed Julie asks her live-in maid. “Because you’re not,” she responds. The narrative arc of Blue (or liberty, to mention but not force the clear symbolic correspondence between the three colors and the ideals embodied by the French flag) is straightforward insofar as it entails little more than the gradual emotional catharsis of its grief-stricken protagonist, but the simplicity proves deceptive. In choosing such a loaded foundational principle and presenting it in a seemingly apolitical way, Kieślowski extracts far more from the idea than he would if he handled it more directly. It’s in the resultant multitude of interpretative possibilities more than the structural similarity of being a multi-part work that unites this with the Decalogue—like that ten-hour masterstroke, the characters here are as intimate as they are conceptual. Julie wants to unbind herself from all people and things in the hopes that, once she’s as alone as she feels, there will be no more hurt. This isn’t what happens, exactly, but there’s an earned quality to her tears which, in addition to underscoring her connection to the two protagonists to follow, makes Blue the most self-contained and independently satisfying entry in the trilogy. 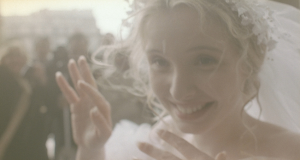 White, by contrast, has always been the hardest to connect to, and thus the most dependent on its counterparts for contextualization. Yet even here there’s a precision to the rags-to-riches/revenge story cutting through the elliptical playfulness of Kieślowski’s approach. “Where’s the equality?” Karol asks in the most overt allusion to the ideal symbolized by the color white. What’s on display throughout much of the film is a parade of inequity, most of it retaliatory. We know that Kieślowski, like Karol, was a Pole with ties in Paris, an outsider status that grants the character a feeling not of an easily understood friend but of a man traversing a strange dreamscape that often appears poised to self-reflexively hint at its own unreality. As soon as White shows us a scene that appeared briefly in Blue in fuller detail, we’re provided with the sense that questions have been both asked and answered. It’s a sort of trick: Kieślowski gives us one bit of information while simultaneously nudging us to look for others on our lonesome. At the same time that he shows his omniscience, he calls the very idea of it into question. We know more about what we previously saw, but we’re also left wondering how large a piece of the puzzle what we’re currently seeing really is. For the rest of the cycle, we’re looking forward and backward even as we absorb what’s occurring at any given moment. 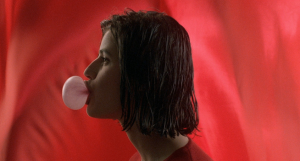 All of this is leading somewhere, of course. “I feel like something is happening around me,” says Valentine, through whose eyes we see Red, “and it scares me.” Here, near the end of the whole affair, the dread which has been slowly creeping throughout shows its face more overtly than ever before. The tension between chance and fate plays a large part in Three Colors, nowhere more so than in its final installment, and the moment it reaches a head is surprising, yes, but also somehow inevitable. The cycle is peppered with so many beautiful moments—the acting out of an unfinished symphony by a dead composer by his wife and friend, a vividly washed-out memory of a wedding, the coming together of so many unlikely individuals—along the way that, strange and wondrous ending notwithstanding, this is ultimately a case of journey trumping destination. Kieślowski knew how to be ambiguous without being oblique, and the ways in which his work draws the viewer in without fully explaining what’s in store is less a taunt and more an open invitation. The world of these films is at once strange and familiar, easy enough to imagine but fantastical enough to seem somehow unreachable.

Each instance of the color of the respective film’s title showing up is so gracefully handled that, though pointed, the connections never feel contrived. They’re noticeable, but rarely overwhelming—and when they are, it’s clearly intentional. It should come as little surprise that a trilogy entitled Three Colors uses those hues as emotional bellwethers, but the fact that their meaning is seldom obvious or clearly delineated is part of what makes this such a major work. It’s many things at once, but most of all it’s an open book: I can think of few films that reward repeat viewing in such a distinctive, even fun way as these three. Red was Kieślowski’s final film, and the open note on which it ends is indicative of his entire body of work: rife with mystery but welcoming to all.

Audio/Visual: What most draws the eye is, naturally, the colors—not just those of the trilogy’s title but greens, yellows, and purples all mixing together in a rather lovely way. This is the first Kieślowski I’ve seen on Blu-ray, something that carried with it the misinformed notion that his films weren’t always pleasant to look at. How wrong I was. There’s so much visual information here that to watch it in any other format save a 35mm print seems blasphemous. The ambiance in Three Colors is as sonic as it is visual, however, and Criterion’s Blu-ray package conveys each with a richness that’s been woefully absent in prior releases of the films. At once crisp and soft, the sensory environment of the trilogy is vividly rendered here.

Supplements: Too many to count. There are interviews, video essays on all three films, several shorts directed by Kieślowski, behind-the-scenes and making-of footage, and much insight into the director himself via video pieces and standalone essays in the eighty-page booklet. It’s a bit strange and even overwhelming to absorb so many others’ thoughts on the trilogy, given how enigmatic and even personal it is as a viewing experience, but it’s also hugely useful. Kieślowski is an artist whose work both warrants and asks for a multitude of voices, even if it’s ultimately up to each individual to find their own answers.