THIS VACUUM IS TOO LOUD

In my personal experience, just about every director I’ve spoken to or read about has pretty much always looked back on his or her earliest work with cringing and embarrassment. Even at their best, these early films tend to fall short of their marks. The reasons for this are multitudinous and obvious—the primary one being that making movies is actually a very difficult thing to do. But in many cases, the problem starts before production. It begins with the basic concept. So many young filmmakers are too busy copycatting other filmmakers to forge a path of their own. While that’s understandable, it doesn’t make this work any less painful to sit through.

But here comes Gus Péwé from Denison University with This Vacuum Is Too Loud. Though this endearing just-under-six-minute short film is far from perfect, it manages to accomplish something that should have Péwé’s instructors feeling very optimistic. Made while a freshman undergraduate, Péwé’s film is a super-duper example of a class assignment made on a tiny budget that has something many professionally produced films at more widely heralded film schools are often missing: a truly distinct voice. Péwé’s film is as far from a “calling card” as you could possibly encounter—thank God for that—and though that makes it easier to forgive its shortcomings, as the film builds to its stirring conclusion, those shortcomings no longer even feel like shortcomings. 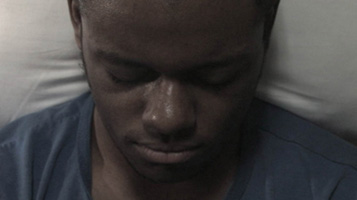 This Vacuum Is Too Loud tells the story of a non-earthling who has been stuck on our planet with no ability to return home. Only this non-earthling doesn’t look like an alien. He looks like a regular old Denison University undergrad. You might be thinking that this was lazy writing/casting on Péwé’s part, but I ask you, would you rather this alien look more like an alien in the silvery sci-fi sense? Especially if it meant breaking out the tin foil from the kitchen cupboard? Fortunately, Péwé doesn’t try to reach beyond his limited production means with this early class assignment. Had he done that, he would have lost this viewer immediately.

Our tender alien hero does like some things about living on Earth—orange soda in a big Dixie cup and “the part of the year when the trees fall apart”—and he even found himself falling for a pretty girl, but when she paid more attention to a kid who had no decent values or respect for other people, he decided that he was officially over Earth. Now he just has to build a homing device that will enable him to travel back to the land where he belongs.

To us, that life might seem less than ideal. Yet for this alien, that is his home. He goes on to wax defensively poetic about how misguided it is for people to talk smack about outer space, about how empty and boring it must be. “Some planets are empty as the emptiest parts of space,” he says, as the camera drives past an unflattering—and seemingly unending—strip of suburban American sprawl. Right you are, shunned alien.

Though This Vacuum Is Too Loud is ultimately about loneliness, it’s about homesickness too. Incorporating animation into his otherwise scrappy digital video aesthetic, Péwé transcends his limited production means and delivers a strangely affecting conclusion. Moments after the credits have rolled, This Vacuum Is Too Loud remains there hovering like a weird planet in the nighttime sky.