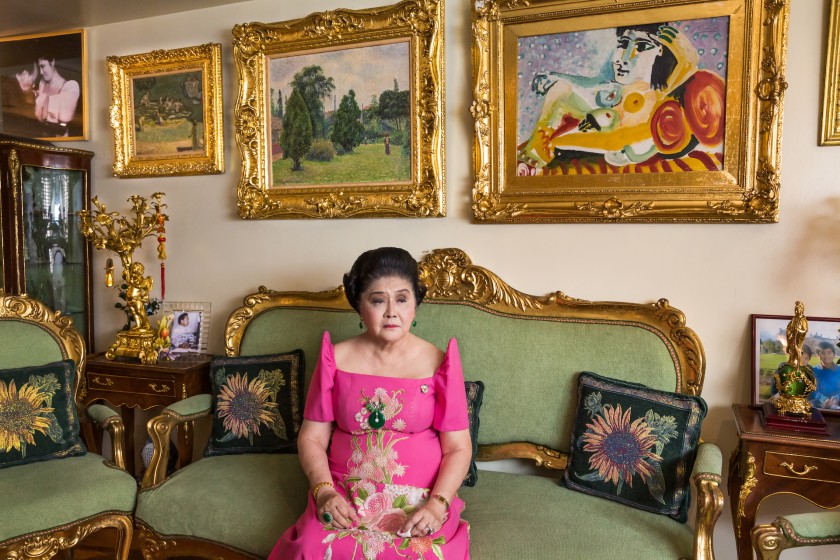 (Filmmaker Lauren Greenfield examines the controversial history of Filipino politician Imelda Marcos and her family in The Kingmaker. In theaters now!  Like what you see here on Hammer to Nail? Why not pay just $1.00 per month via Patreon to help keep us going?)

Back in 2003, director Ramona Diaz (Motherland) completed a documentary entitled Imelda – it premiered on PBS in 2005 (though its footage was shot mostly in 1998 and 2001) – in which she follows the erstwhile first lady of the Philippines, Imelda Marcos as she reflected on glories past and (ostensible) miseries present. Told through a series of intimate interviews with its subject, the film paints a remarkable portrait of an authoritarian figure unable to grasp the extent of her husband Ferdinand Marcos’s corruption. Blessed with a wealth of charm to bolster her already considerable financial fortune, Imelda holds our attention, throughout, even as we marvel at her constitutional inability (or, more likely, unwillingness) to think critically about her misdeeds. It’s an always watchable examination about grand cluelessness.

Now comes Lauren Greenfield’s The Kingmaker, which picks up the narrative almost 15 years later, in 2014, with Imelda older but more energetic than ever, and scheming to return her family to power via her children. There’s the eldest, Maria Imelda Josefa, or “Imee,” a regional governor at the time the film begins, and now a senator, who is certainly no slouch and has built a sizable political machine since the family’s homecoming, but the hopes and dreams of Madame Marcos lie with Ferdinand, Jr. Bongbong, as he is known, has aspirations to the presidency, but since most folks think it’s still too soon for a Marcos as the country’s top executive, he’ll settle for vice president … for now. And so we are spectators to the campaign as Bongbong banks on the country’s forgiveness and/or forgetfulness (or love of strongmen, which also works) to propel him to the #2 office in the land (Filipinos choose the president and vice president separately).

How does it go? Well, he’s not vice president now, but the truth is a little more complicated than that. Indeed, Greenfield (Generation Wealth) reveals quite a lot in this intricate and disturbing look at a political dynasty that thirsts for its former dominance and just might get it. Imelda is as indifferent as ever to her vast privilege, unearned though it may be. We open on her dispensing charity to children in the street, a queen among her peasants. This is how the rich see their place in the world. Forget real reforms that could create a system where enormous class disparities might not exist. No, money, however misbegotten, is there to be used at will and, occasionally, given away to the indigent. The sad thing is how much loyalty it earns for Imelda.

The people in opposition to the Marcos family are in trouble. Greenfield interviews those who suffered at the hands of Ferdinand, as well as those who helped overthrow him, many of whom are afraid for the future. She also talks to the country’s current vice president, Leni Robredo, now facing charges of attempting to overthrow the president, Rodrigo Duterte. Interestingly, I assumed, as I watched Bongbong lose the election (no plot spoiler there, as it is now history), that Duterte was the Philippines’ current master. Maybe, maybe not. The film is not called The Kingmaker for nothing. Imelda, in her nineties by the movie’s end (she was born in 1927), seems remarkably well-positioned to guarantee Bongbong’s eventual ascent. Will it happen? If so, you saw it here first, in this intriguing, intrigue-filled and gripping, if twisted, tribute to Imelda’s Machiavellian resolve.