(The Future world premiered at the 2011 Sundance Film Festival and was picked up for distribution by Roadside Attractions. It opens theatrically (at the IFC Center) on Friday, July 29, 2011. Visit the film’s official website to learn more.)

“Have you ever been outside? Then you know about the darkness that is inappropriate to talk about.” The opening lines of Miranda July’s second feature are spoken by Paw Paw (voiced by July herself, in a purry-processed voice), a sick cat in a shelter with a bandaged paw. The Future delves bravely into that darkness, facing and examining our deepest collective fears—from July’s trademark personal-identity demons, all the way to the real possibility of human extinction. It’s a funny/disturbing odyssey that tunnels through the saccharine surface of contemporary existence on a quest for, of all things, meaning.

Sophie and Jason are urban creative types living in an insular world that’s only interrupted by their depressing day jobs. In their pre-war L.A. apartment, they theorize and fantasize like overgrown children. Although (or because) they’re tethered to their MacBook Pros and the Internet, they seem totally naïve about the outside world. Their only view is into the window of an older woman who occasionally brushes her hair. “That woman really has her shit together,” deadpans Sophie. 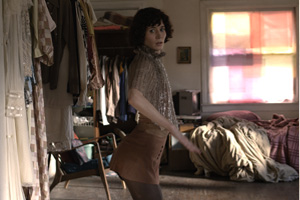 July’s performance has the idiosyncratic, inquisitive charm reminiscent of Me and You and Everyone We Know—but as Sophie her desperation is less about connecting and more about a need to accomplish and to be seen. Her tenuous hold on identity is expressed in Woody Allen-esque neurosis: at one point, entering a house, she’s asked for her coat. “It’s kinda part of my outfit… okay….” she frets.

In a series of stunning monologues, Paw Paw presents a starkly contrasting reality—primal and emotional, violent but also a bit Zen, all of which contrasts nicely with the girliness of the talking-kitty concept. The film’s central dramatic pull is Paw Paw’s need to be cared for: “When night comes I am alone, and always have been and always will be alone…” Sophie and Jason sign up to adopt Paw Paw, in a month. He’ll require full-time care. 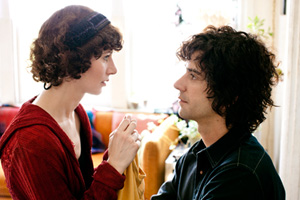 Their attempts to re-prioritize, in their last 30 days of freedom from responsibility, are both funny and painful/pathetic. Sophie decides they should turn off the Internet; Jason decides to just be aware, to listen for signs. Fascinated by a hilariously cheap YouTube video made by a dumb co-worker, Sophie decides to create 30 dances in 30 days. “I emailed everyone,” she says, setting herself up for a fall.

Jason meets Joe (Joe Putterlik), who lives among hundreds of dirty-limerick holiday cards he’s made for his wife of 60 years. “You’re just in the middle of the beginning right now” is his relationship advice to Jason, and the film goes on to extrapolate this thought onto our entire conception of time.

Sophie has a wrenching struggle with creative block: in one of the most visceral scenes, the internal standoff between her ambition and her fear literally drags her to the ground. In her despair, she meets a suburban single dad, Marshall (David Warshofsky), who’s willing to watch her, all the time. This is one of the film’s most interesting experiments, questioning what it would take for a grown woman to genuinely satisfy the kind of hunger that stems from an unmet childhood need. And it brings up another of the film’s main ideas: Sophie confesses to Jason, “One thing… is that I’m wild,” which connects her thematically to Paw Paw, and to the fate of being truly alone.

As the deadline for adopting Paw Paw draws near, time ceases to be linear and the story becomes increasingly surreal, moving toward a conclusion that is both devastating in its finality and not necessarily final at all.

The Future is the rare film that draws the hidden map of the contemporary psyche, putting words and images to what’s been molding in the collective subconscious. It takes you to places you’d be scared to go alone, discovering horror, humor, and strange treasures in the darkness, and in the end finds its ray of light—an idea, a new perspective.