“Oh yikes hon, you don’t get to call these whorehouses you’ve littered the landscape with ‘churches’—hello!” Thus we wake up in the universe of the Westboro Baptist Church: matriarch Shirley Phelps-Roper tearing into a hostile phone call with her signature brand of swaggering, upside-down logic. With The Elect, filmmakers Dan Moore and Erin Zacek bravely present this world in strict verité style, without comment or context. It’s a disconcerting experience that at first leaves you fighting off Stockholm syndrome—Phelps-Roper exudes warmth and humor even as she preaches an unabashed doctrine of hate. But it’s an effective way to (not) frame the film—giving the viewer an experience similar to that of one of the many children born into the infamous Topeka, Kansas congregation.

The core of Westboro’s belief system is that God does not love everyone; in fact, He hates anyone who deviates from the narrow path of Fred Phelps’ idiosyncratic interpretation of Christianity. But the Phelps’ approach to presenting their message is bizarrely playful: there’s a lot of highly surreal footage of the family rehearsing re-workings of pop songs, with an emphasis on Lady Gaga (the lyrics inevitably end in some variation of “you’re going straight to hell”).

Fred Phelps, who founded Westboro in 1955, is shown briefly preaching from the pulpit, old and feeble, his pale blue eyes those of a true believer. The gospel of hate is his, but it’s clear that his daughter Shirley is now the driving force within the church. She’s constantly in action, giving out scoldings and hugs to her brood, spitting out chunks of doctrine, dodging attacks and verbally pinning her opponents like a Judo master. 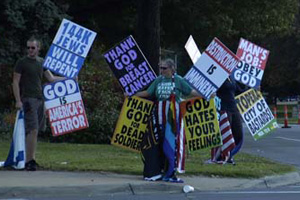 You start to wonder what drives her. She seems to have no interest in winning over anyone to her cause: the church pickets anything and everybody and even desecrates the American flag. The main thrust of the picketing is an attack on “fags,” yet she doesn’t seem particularly angry. Her protest songs go way over the top into silliness; she rhymes that sodomites “are the lowest rung” and “eat each others’ dung.”

As you spend time with her you see how her charm is that of a ruthless defense attorney, skilled at manipulating emotions and determined to come out on top. Her father has handed her an impossible case, and her life’s mission is to keep arguing it. It becomes clear that she loves provocation, getting off on her power to make others lose their temper: at one point she ends a phone call with “by the way, your parents hate you.” As the end credits roll, we see her grinning in triumph as she gets a series of TV hosts to explode with anger.

She also seems to be quite the media whore, giving off a distinct whiff of envy as she spits out the names of “famous bimbos” Dolly Parton and Katy Perry.

The film compellingly keeps coming back to the faces of the children, for whom this world is all they know. In a telling scene, one of Shirley Phelps’ young sons tries to run up ahead of her. Gripping his hand, she addresses him in sharp legalese. “Between you and me whose will do you think will prevail in this contest?” she grins. “You,” he replies. “Exactly, so you might as well give it up.”

The Elect delivers an experience akin to having tea with Satan in his living room. Moore and Zacek are to be commended for taking on the daunting task of evenly documenting such inflammatory material without getting drawn into confrontations or challenges. They outmaneuver Shirley Phelps by giving her plenty of rope, laying bare the sad little power trip that consumes her family’s energy and delivers so much pain and hatred into the world.