(We here at Hammer to Nail are all about true independent cinema. But we also have to tip our hat to the great films of yesteryear that continue to inspire filmmakers and cinephiles alike. This week, our new addition to the site, “The Curbside Criterion” continues where HtN staff can trot out thoughts on the finest films ever made. This week Brad Cook dives into the new Blu-Ray release of The Thin Blue Line, Errol Morris’ fantastic documentary that changed the life of an innocent man.)

The “thin blue line” represents the police who keep society from sliding into anarchy, someone remarks during this landmark documentary by Errol Morris. But what happens when the zeal to catch the bad guy becomes so overwhelming that the wrong person is convicted of a crime, even when the actual perpetrator is right there in front of the police and the District Attorney the entire time?

That’s the thrust of Errol Morris’ The Thin Blue Line, a 1988 documentary, which uses reenactments and interviews with the major players, except prosecutor Douglas Mulder (he used the “thin blue line” comment in his closing argument), to lay out the case that Randall Dale Adams didn’t murder a Dallas police officer in 1976. The film begins with Adams’ story, interweaving it with comments from David Harris, a teenager who had stolen a car from his neighbor in the nearby town of Vidor and driven to Dallas with several weapons.

A chance encounter in the morning between the two led to them spending the day together. They went their separate ways that evening, and sometime after midnight, officer Robert Wood was shot and killed while approaching a car he had pulled over. The vehicle matched the description of the one Harris had stolen, and eventually that led police to Adams and Harris. The lawyers who represented Adams at trial speculate during their interviews that Mulder chose to charge Adams because he couldn’t get a death penalty conviction against a minor, and the feeling was that the citizens of Texas would settle for nothing less than death for someone who had killed a police officer.

Of course, Adams was not a guy who fit the upstanding citizen model, which helped sway the court of public opinion. He was a drifter from Ohio who was passing through Dallas with his brother when they decided to stay there and work. He also drank beer and smoked pot with Harris while they were hanging out together. But he had no prior record, whereas Harris had been in plenty of trouble before that fateful night, and he continued to commit violent crimes afterward. Harris even bragged to friends in Vidor that he had killed a police officer in Dallas. 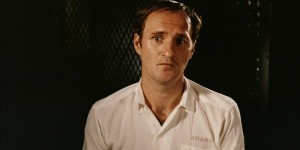 The witnesses were also suspicious: A couple who drove by as Wood was approaching the car were able to give a detailed description of the driver, despite the fact that it was nighttime and their windows were fogged. (Someone who knew them personally suspected that they wanted the reward money and would say anything to get it; she is interviewed too.) Another witness claims to have a photographic memory, but during his interview with Morris, he had trouble remembering many details.

The Thin Blue Line takes us through Adams’ conviction and up to an 8-1 Supreme Court decision that commuted his death sentence to life in prison. (The prosecutor, citing a 9-0 ruling in his favor in a Texas appellate court ruling, was quoted in the press as saying he was still ahead, 10-8. Yeah, it doesn’t work that way, buddy.) The film ends with a final audio interview with Harris, who all but admits that he killed Wood.

Morris’ decisions to stage reenactments and employ a haunting score by Philip Glass give the film a cinematic feel that was revolutionary in the documentary field when it was released in the late 80s. The reenactments play out differently, depending on who’s talking (there was some conflict over where Wood’s partner was when the shooting happened, for example), lending a Rashomon-like quality to how the story plays out.

Within a year of the film’s release, Adams’ conviction was overturned, thanks to the scrutiny of the case provided by the film’s success. This Blu-ray includes a Today show report about his release, along with a new 40-minute interview with Morris looking back on the film and the circumstances that led to his relationship with Adams ending. The final bonus feature is a 14-minute interview with Joshua Oppenheimer, director of The Act of Killing, who talks about the film’s influence on the documentary genre. He and Morris both spend some time dissecting the reenactments and how they were used to maximum effect.

There’s also a booklet with an essay by Charles Musser, a film professor who recently made a documentary about Morris. It would have been nice to have some additional bonus features, such as a commentary, on this disc, but overall it’s a solid presentation of a noteworthy film.