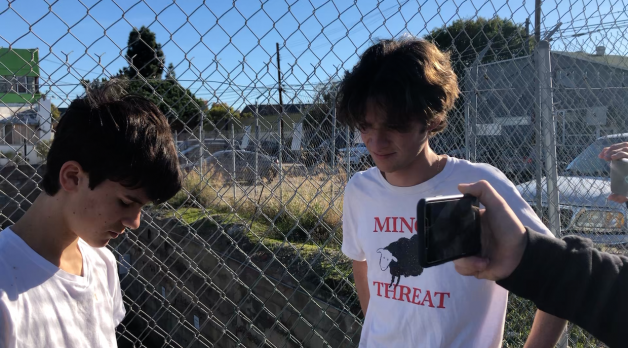 You can perhaps be forgiven if you thought the new Slamdance Film Teenage Emotions was made by the teenagers who star in it. Technically you would be correct because it does appear when the final credits roll that most of the actors in the film have various behind-the-camera duties as well. However, the mastermind behind this film is Frédéric Da, who filmed his New Roads School students during lunch breaks at the Santa Monica school where he teaches.

With fascinating ease, the teenagers of the film interact with each other almost as if the camera is not in their face – but in their face it is. Right in their face. In fact, the most unsettling thing about Teenage Emotions is the cinematography, done entirely on iPhones, which often involves shoving the camera almost too close to the face of its subject matter. It takes a moment to get used to, but once you do, it’s like you are just part of the conversation, one of the other friends who just doesn’t happen to talk. It’s about as close to being in high school as you can get without a VR headset.

The film follows several different groups of teens dealing with their daily problems: copying homework from each other, dealing with social anxiety, and gossiping about who is hooking up with who. It’s not a documentary, but it might as well be. I can’t imagine that Frédéric Da wrote any of this dialogue because the voices of the students ring out so authentically. He wisely stays out of their way, supplying, I gather, scenarios and tactics. Though it feels like there is little plot for a good portion of the film, storylines gradually appear and connect as the audience collects the details of these teenagers’ lives. Ava, the hottest girl in her class, may or may not be dating a senior, much to the chagrin of her classmate who’s crushed on her since 6th grade. Meanwhile her senior ‘boyfriend’ receives a lecture from his friend about the inappropriateness of the relationship. Jaden, a sensitive boy in a group of misogynist asshole friends, wonders why they can only talk about ‘titties’ and rate girls based on some sort of Instagram-influencer scale. In similar vein, Jaya is tired of being put in the ‘friend’ zone. She wants to get attention from boys but doesn’t want to have to dress like a slut to do it. In one of my favorite vignettes, an older brother wants to save his younger brother from social awkwardness and a life of staying inside and talking to teachers about birds.

There’s so so so much going on, just like life. The roughness of the filming doesn’t matter as much as the realness conversation. There’s no attempt to force the students into conflict that is bigger than necessary. When you’re fifteen, everything feels like the end of the world anyway. Teenage Emotions‘s in your face cinematography turns out to be a real asset as entire scenes can be played out in a series of look once you know the characters and where they are coming from.

I read in a preview piece that Da was not able to finish the film and tie up storylines due to the coronavirus pandemic but that hardly seems important. Everyone knows that today’s daily heartbreak will only be followed by tomorrow’s heartbreak in the life of a high schooler. Any attempt to tie things up might have felt too neat.

What Da’s film lacks most is a strong directorial vision, the full utilization of post-production. I’m not sure what other footage is out there, but I couldn’t help but feel like it could be doing more shifting between stories and assembling them together. Most notably missing (or inappropriately chosen – Mozart?) is music to score these kids’ lives. Many of them have even headphones in throughout entire scenes. This seems like a missed opportunity. Finally, of course, there’s what’s missing from these kids’ experiences, which is everything that happens when they’re not at school. The general innocence of the interactions reminds the audience (unfortunately) that these are actual kids, and not hired actors, kids whose parents probably had to sign a permission slip to be in the film. I’m pretty sure these kids are the same age and live within 20 miles of the kids in Euphoria, so I guess Santa Monica is free of illicit drugs? Although I didn’t wish it in the moment, I couldn’t help but think we weren’t getting a full portrait of these students.  It’s a bit like watching Mayberry High School.

Final side thought: were these students paid ? If not did they receive some sort of class credit? If not, are they not exploited labor under California law? Burning questions inspired by a truly innovative film. Do not miss this one.

Author’s Note: Teenage Emotions screened as part of Slamdance 2021. In 2019, Slamdance awarded a Grand Jury prize to Nicole Brending’s Dollhouse: The Eradication of Female Subjectivity in American Popular Culture, a film called out for transphobia by over a dozen critics (See here here here and here for examples) Slamdance has yet to issue an apology. The UK organization TransActual has a great explanation of Transphobia and other useful resources in case you would like to know more.