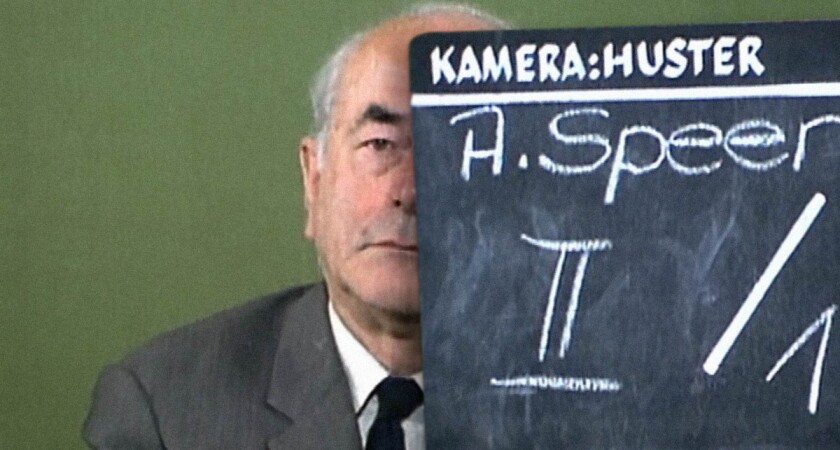 (Vanessa Lapa’s latest documentary Speer Goes to Hollywood is in select theaters now. Like what you see here on Hammer to Nail? Why not give just $1.00 per month via Patreon to help keep us going?)

Vanessa Lapa, famed Israeli journalist and documentarian, returns with a riveting story of Andrew Burkin’s failed attempt to adapt Speer’s Inside The Third Reich into a feature film. Albert Speer was Hitler’s minister of war production. While Speer attempts to rid himself of guilt about his role in the Holocaust, Andrew Birkin tries to turn those atrocities into art. Lapa takes on quite a challenge with this film as she attempts to turn forty hours of conversation between a Nazi and a protege of Stanley Kubrick into an informative documentary. There are many directions Lapa could have taken, but the decision to use almost no added voiceover was a strong one.  The subtle horrors within these conversations hit the hardest. In one sequence, Speer responds to Paramount’s criticism that the script is “whitewashed” by saying “well, that’s their problem.” At this moment, he drops his “good nazi” act and his true evil comes to light. With a title like Speer Goes to Hollywood, audiences may expect a comment on Hollywood, but the film is more of an examination of denial of past crimes.

The narrative is told through rare archival footage from the Nuremberg Trials and after Speer’s retirement. Along with the lack of narration, the interweaving and juxtaposition of these timelines make the documentary unique. Lapa dissects a man who escaped the death penalty for tremendous crimes and assumed a self-serving bias to shirk responsibility. Lapa holds back on direct criticism. She gives audiences the burden of deciding how they feel about both men. While she does cue menacing music at times, what struck me most were the moments in which Birkin or Speer would speak casually about nazi barbarity with no apparent remorse. At one point Speer describes his feeling towards the Jewish people as not anti-Semitic but “a feeling of disgust.” Birkin’s silence at this moment as well as many others speaks volumes about the type of man he was. Not even Carol Reed, Birkin’s cousin, could make him realize that he was making the wrong decision attempting to make an award-grabbing feature by exploiting Jewish suffering. Birkin is not a nazi, yet, somehow, I came out of this film equally disgusted with him as I was with Speer. Despite Speer’s horrific past, in the film, he comes off as a senile, harmless man. Birkin is a young man who just got off set with Stanley Kubrick and he thought an Inside the Third Reich adaptation was a worthy idea for a film. It is shocking to hear. The only way these conversations could be shown to the world in a palatable way is through the documentary medium.

Films about films are always compelling. One of my favorite documentaries of all time is Les Blank’s Burden of Dreams. What makes these films captivating is hearing about all of the insane people who are behind their creation. The insanity that we hear about in Speer Goes to Hollywood is much different than in JODOROWSKY’S DUNE. This film is so horrifying, yet genuinely entertaining. This entertainment comes from the shocking ignorance of both of these men. Lapa has made over one hundred documentaries for Israeli television in her career and her experience is evident. Her selection of archival footage, restoration of this conversation, and editing skills are all top tier. Her own voice enters the conversation through the footage she chooses. The footage is even more harrowing when contrasted with these men living freely, happily trying to make a Hollywood feature. The sequence in which Birkin proposes Mark Burns plays the role of Speer is an intriguing look at the strange psyche of Birkin. What makes this documentary particularly fascinating and grim is that Lapa did not settle for a basic talking head structure. Instead, she utilizes an engaging, non-linear structure that forces the audience to examine the mind of a close acquaintance of Hitler.

No one will come out of this documentary a fan of Albert Speer’s, however, you may find yourself briefly understanding where he is coming from. On a much smaller scale, humans can block out bad things they have done and bury them deep in their brains. Humans can also lie so much that they no longer know what the truth is. These thoughts ran through my head because Lapa planted them there. Lapa utilizes approximately one hour of the forty hours of recorded conversations. She is not afraid to leave in Speer’s (almost) rational moments, how this man became known as “the good nazi.” This is a must-watch for all Jews, cinephiles, history nerds, and it is guaranteed to spark animated discussions.