(Sorry, Thanks is now available on DVD

. It world premiered at the 2009 SXSW Film Festival. Visit the film’s official website for more information.)

When asked to picture a producer, the first image that springs to mind is a Bruckheimer-inspired Hollywood wheeler and dealer, talking on his blackberry, floating in the pool or demanding a very specific mocha beverage from his assistant. In reality, the best indie producer is a persistent yet gentle problem solver, someone with that unique combo of common sense and outlandish dreams. Something altogether more… maternal. Indeed, some of the most standout indie producers working today are females. Dia Sokol is one of these. Her name has been attached to some of my favorite truly independent projects of the past half-decade, most notably, Andrew Bujalski’s Mutual Appreciation and much anticipated Beeswax. She was also instrumental in bringing both Alex Karpovsky’s Woodpecker and Joe Swanberg’s Nights and Weekends to the screen. It seems only just, then, that Sokol should have the chance to write her own punchline to the lost-twenty-something-walks-into-a-bar joke that critics refer to as Mumblecore.

Sokol has finally made this film, and the result could easily become a well-worn favorite in the DVD library of Gen-Yers of both sexes. The film tells the deceptively simple tale of Kira and Max, two San Francisco quarter-lifers whose paths intertwine uncomfortably after a drunken, vaguely sweet one night stand. Kira has just left a long term relationship, while Max is still very much a part of one (his girlfriend, Sara, is pretty, funny, and infinitely patient.) But both have been stuck too long in jobs they hate and are unable to tap into the vibrancy of their multi-culti Mission neighborhood. Our two anti-heroes lie to themselves, and each other, as they attempt to articulate their own next steps. 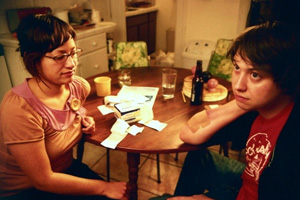 Kira is winningly played by first-time actress Kenya Miles, but its Wiley Wiggins as Max who turns in the films most compelling performance. As tortured freshman Mitch Kramer in Dazed and Confused, Wiggins was the straight man, a reserved adolescent who spoke with his eyes. But Max is not Mitch a decade later. Chatty, aggressive, and in love with his own twee ramblings, Max is something more like Larry David, an egomaniac with a faulty moral compass (his maddeningly sharp sense of humor keeps him from drifting into the realm of total intolerability). Wiggins still employs those expressive peepers, most notably in a scene where he stares down the orange cat he has just adopted in an effort to be a better person. Frankly, he says, he thought it would be cuter. With a bumbling male like Wiggins at her film’s center (along with a superbly caustic supporting performance by Bujalski as his incredulous best friend) Sokol has not attempted to feminize Mumblecore. Rather, she has commercialized it—and that’s not a bad thing.

Sorry, Thanks has all the pleasures of the “genre”: wince-worthy awkwardness; a loving eye cast on the mundane and aimless; freckled, chubby people you could easily know. But the film avoids the pitfalls that make films like Funny Ha Ha and Kissing on the Mouth obtuse to the average cinema-goer. Someone whose tastes don’t lean toward the indie can clearly recognize Sorry, Thanks as a real live movie: the sound is clear, the image is steady and the plot is tight. One can’t help but think Sokol’s history as a producer has something to do with the solidity of her first directorial offering—this lady clearly knows how to get things done.

Sokol’s script (co-written with producer Lauren Veloski) is as seamless as any studio rom-com—if studio rom-coms had astute, nuanced dialogue and a skilled cast of filmmakers to offer improvisational touches. Sorry, Thanks has just enough plot to keep it interesting, while still allowing the shapelessness of real life to inform it’s forward(ish) motion.