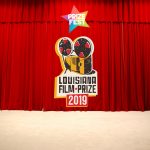 If you pay any attention to the festival circuit, you are aware of a very different sort of festival in Shreveport these past 8 years. The Louisiana Film Prize is a magical oasis in the world of film where short films are king. The filmmakers must film in Shreveport and then the Top 20 are selected to compete for a $50,000 prize. That’s right, a short filmmaker can win $50,000. There is nothing else like it in the world and it’s all due to the magic of creator Gregory Kallenberg.

I am heading there this Thursday as a judge and fan. I have juried the Memphis Film Prize, which is a spin-off of this one and watched what it has done for filmmaking in Memphis. But I haven’t been to Louisiana Film Prize in 4 years so I am looking forward to seeing if it is still as magical as the first time I attended. The first sign of progress for this year in advance of the festival is that they received a 50-50 parity between male and female filmmakers in the Top 20.

It works different than other festivals. The festival puts 50% of judges votes and 50% audience votes to determine the winner. This allows filmmakers to really market themselves and bring in a crowd and encourage people to vote for them. A market situation has developed out of that with filmmakers giving away merchandise, setting up info tables to talk with audience members and created a real sense of an event happening. I am fascinated to watch the process and to see some great films.

The festival kicks off Thursday through Sunday but is not just about movies. The Prize Fest has been adding new elements each year starting with a music concert, then food and now fashion. So there is some food tasting parties, some concerts, some movies and now a fashion show. It makes for a busy weekend.

An aging black man struggles to come to terms with the future he never saw for himself – one in which his dear wife is gone, and his step-son is white and gay.

AND THAT IS WHY I SUCCEED

A basketball coach gives a unique halftime speech to his team.

Their life is a musical – and it’s gone straight to their heads.

All Johnny wanted was a free boat, man.

An unconventional fashion show model no longer makes the cut and finds out what happens when the price of fitting in is too high to pay.

Post U.S.-Vietnam War, a young man is determined to heal from PTSD despite his atypical bouts of disassociation.

A hitman finds himself trapped inside an elevator with the man he’s been contracted to kill.

A glamorous 50-year-old widow named Caroline goes on 6 dates with a variety of men.

A lonely man uses his special gift to pursue his dark infatuation with a coworker.

Pastor Paul is trying to save Ambrose’s soul. It’s not going well.

A couple in love, torn apart by race, find each other 30 years later and must do the impossible to stay together; even if it means risking their freedom forever.

Maeve Fairbanks is working toward living out her sister’s lifelong goal by submitting a video to be considered for the first piloted mission to Mars, her approach is a bit…offbeat.

On Christmas Eve, after a long shift as a mall Santa, Mike’s house is broken into by a pair of robbers who are in for a big surprise.

Nowhere, Arkansas, 1863. A Confederate veteran, haunted by his past, hunts redemption in the form of a famous eagle that belongs to the Union Army.

Becky, a southern belle with southern grit, has loft goals of joining a ladies tennis team at the local country club.

A flustered first time mom attends a therapy session, with her toddler in tow.

Through movement we find the resilience and creativity of the people of Louisiana, when moving through a difficult time.

An immigrant housekeeper struggles to adjust to the outlandish snobbery of her widowed mistress and forms an unlikely friendship with the woman’s sheltered daughter.

A lifelong group of friends won’t let a one in a million genetic disorder get in the way of Jacob’s wedding day.

The year is 2289, and all that’s left on Planet Earth is the domed city Old Centauri, roaming sun flares that scorch the land, and the nomadic tribes that mitigate the two. Kiirke comes from one such tribe, and she must travel to Old Centauri, along with her brother, to seek a small fortune to save her her family.