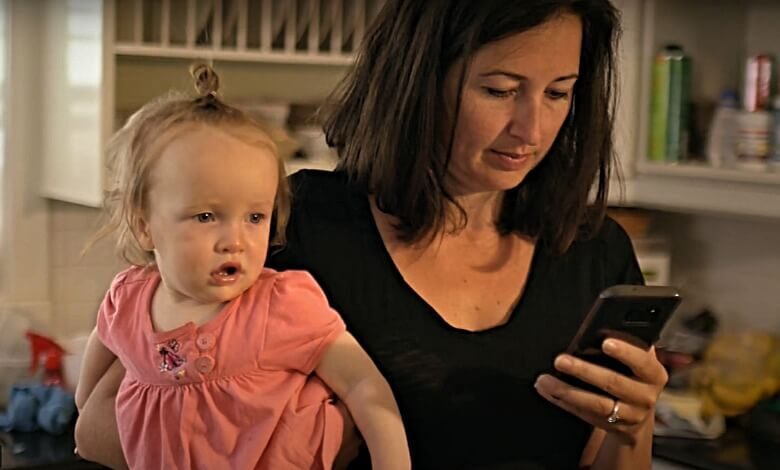 (Jon Hyatt’s feature debut Screened Out is available now on VOD. Like what you see here on Hammer to Nail? Why not give just $1.00 per month via Patreon to help keep us going?)

Mixing the personal with the scientific, director Jon Hyatt, making his feature debut, leads viewers on a journey both fascinating and frightening in his new documentary Screened Out, which tells the tale of how our phones and other smart devices have been designed to maximize user addiction. Ever feel like you just can’t put them down…who are we kidding, when do you not feel that way? Well, there’s a reason, and Hyatt is here to explain why, accompanied by a bevy of experts armed with solid data. By the end of the film, you may just want to give yourself a well-deserved break from universal connectivity. Or not. I’ll take another hit of that, please.

First, we begin at home with the director, whose wife and he have decided that enough is enough and they need to set a proper example for their children. With a little bit of research, Hyatt discovers that, according to Microsoft, human attention spans, in terms of the ability to focus on one thing, have dropped from 12 to 8 second since the invention of smartphones. That’s one less second than that of a goldfish. I’m sorry, I lost the thread; too long of a paragraph.

We all experience some level of guilt from looking down at our screens rather than at the people around us, don’t we? In a better world, maybe. It turns out that the phone apps we so avidly download are designed to monetize to the max, and to do so via the gambling-like addictive behaviors built in. These take the form of random rewards – what the late psychologist B.F. Skinner called “intermittent rewards” – rather than consistent ones, coupled with the bottomless feed of our social-media networks. We can never put the phone down because there is no end to its delights, and we never know when an especially interesting new photo or story will pop up in front of us. Slaves to the machine, we stare on.

The array of authors, academics, entrepreneurs and technologists making all of this clear is impressive, including: Dimitri Christakis, noted pediatrician; Nir Eyal, author of Hooked; Melanie Hempe, Executive Director of Screen Strong; Chamath Palihapitiya, CEO and Founder of Social Capital (and formerly part of the Facebook team); Alex Pang, author of The Distraction Addiction; David Sax, author of Revenge of Analog; Jim Steyer, CEO and Founder of Common Sense Media; Jean Twenge, author of iGen; and many, many more. One after the other, they speak to the dangers of too much screen time. The average person is online for 3 to 5 hours a day; some are on for 7. It’s bad enough for adults, but for children it may be truly detrimental to brain development.

Yes, we’ve heard this all before – television will rot your brain, video games will make it mush – so it’s understandable if one might have some skepticism about all the doom and gloom (then again, have you noticed the state of the world today?). But never before have we held devices in our hand that are explicitly designed to make us never want to put them down. Take note, and take action. Excuse me, my battery is dying.