RAIDERS! THE STORY OF THE GREATEST FAN FILM EVER MADE (Blu ray)

There’s a moment during the documentary Raiders! The Story of the Greatest Fan Film Ever Made when someone – a talk radio host, I assume – rants about the kid-made adaptation, wondering why anyone would want to bother watching “a bad version of Raiders of the Lost Ark” (quote approximate).

Talk about missing the point. Of course the shot-for-shot adaptation made by Eric Zala, Chris Strompolos, Jayson Lamb, and many of their childhood buddies is clumsy and amateurish, as you’d expect it to be. The point is that those guys spent seven years of their childhoods in a stubborn quest to complete a project that many people probably would have given up on, especially when the hormonal changes of their teenage years arrived.

As many people acknowledge during this documentary, including actor John Rhys-Davies (Sallah in the original film), Film Threat founder Chris Gore, movie director Eli Roth, and Ain’t It Cool News owner Harry Knowles, the joy is in watching this fan film and watching how the adolescent filmmakers handled certain scenes, such as Indy hanging off the front of a truck, or Marion’s bar burning down. The stories told by Zala, Strompolos, Lamb, and their parents and friends are the stuff of childhood legend, the kinds of tales everyone tells about their attempts to win Darwin Awards as kids, except these guys eventually ended up meeting Steven Spielberg.

There was a scene they weren’t able to film as kids, however: The one in which Indy fights a beefy Nazi while dodging the dangerous propellers of a German flying wing plane that blows up. They were able to finally film it a couple years ago, though, thanks to a Kickstarter campaign. The documentary jumps back and forth through time, alternating between the ordeal that the final scene became (complete with a poor guy getting knocked off his feet by an explosion) and the filmmakers’ childhoods, which were fraught with plenty of drama that threatened many times to completely derail the project.

Raiders! (reviewed here previously) is an enjoyable film that does a good job of covering the bases, although I wish it had spent more time on the guys’ childhood project. The “filming the flying wing scene” part of the movie is a little overwrought, with an obvious influence from modern reality TV as every stumble is played up as a potential disaster. Yes, there are some obvious moments of drama, such as Zala’s work troubles and the plane detonation mishap, but other developments, like the problem paying the director of photography, could have been cut in favor of more time spent on the 1980s part of the story. Those are minor quibbles, though. 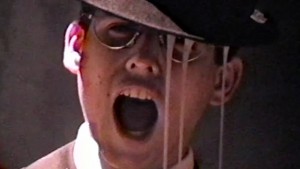 Raiders! has been released in a Blu-ray + DVD set that includes the documentary and the bonus features replicated on both discs, along with a code for a digital download. Thirty-two minutes of deleted scenes have been included, along with 19 minutes of outtakes from the guys’ 1980s filming. The deleted scenes have a lot of 1980s stuff, some of which would have been worthy of inclusion in the documentary, such as the information about the girl who originally played Marion, and the anecdote about Eric and Chris trying to sneak tape recorders into the theater so they could get the dialogue right.

There’s also a 40-minute Q&A from the May 2003 theatrical premiere of the adaptation at the Alamo Drafthouse, which released this documentary under their Drafthouse Films banner. It was the film’s first public showing, not counting screenings that the guys held after completing it in 1989, and Zala, Strompolos, and Lamb spent time afterward answering questions from the audience. Footage from the making of the adaptation is used in some spots to illustrate what they’re talking about.

A pair of commentary tracks round out the bonus features. The first is with Tim Skousen and Jeremy Coon, who produced and directed the documentary, respectively, and the other features Zala and Strompolos. Both are worthwhile listens. The Skousen/Coon track has a lot of good information about the making of the documentary and their approach to it, and Zala and Strompolos have a good time reminiscing about not only their 1980s adventures but also the more recent endeavor filming the plane scene.

Finally, a 16-page printed booklet with some of Zala’s storyboards is also included.