(Pavilion is being distributed by Factory 25 and opens theatrically in New York City at the IFC Center on Friday, March 1, 2013. It world premiered at the 2012 SXSW Film Festival. Visit the film’s official website to learn more. NOTE: This review was first published on March 17, 2012.)

After being assaulted with the corporate consumer blather of ‘interactive’ for four straight days at this year’s SXSW, I was primed to watch a lyrical film about youth, set in both rural New York and exurban Arizona, in which up-to-the-second technologies have been excised from the characters’ experience. Tim Sutton’s Pavilion provided me with that respite.

Max is a lanky 15-year-old who we first see hanging out with his friends and extended family in the lake region of upstate New York. We follow him through a casual lazy summer—climbing trees in the woods, riding bikes through the old neighborhood, and taking late afternoon swims in the crystal clear lake. Adults are present, but they seem to do nothing other than provide the kids with a safe, protected environment. There is no real evidence of discontentment, boredom or angst, so it is left unexplained why Max departs to be with his father in Arizona.

The second part of Pavilion finds Max landing in a very different physical environment of Arizona desert sprawl. Bike rides in the woods are replaced by rides through concrete drainage ditches alongside the highway; Max’s giant attic loft bedroom is replaced by a bed in his father’s motel room. The contrast of these environments recalls Apichatpong Weerasethakul’s Syndromes and a Century, in which the same characters and actions are transplanted from a rural hospital location in act one to an urban city hospital where chaos and alienation ensue. Despite the reversal of environment and home life, Max seems to take it all in stride and connects with a new crew of like-minded, bike-obsessed kids whose lives are lived in the outdoors. No trolling the malls for this bunch, nor any knee-twitching video game sessions. We do see Max with a cell phone in one quick shot, but its presence only reminds us of how lacking those devices are from this depiction of a teenage summer. 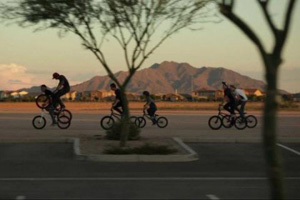 What would you call a film about 21st century youth in which their day-to-day activities are tracked in documentary style and yet there is nary a moment wasted on Facebook or inside a video game? Fantasy? Post-Apocalyptic science fiction? Nostalgic reverie? Mythic naturalism? While enraptured within the beautiful imagery of teens playing in the woods, diving into a lake or riding a bike at sunset through the wilds of desert exurbia, these were the thoughts that crossed my mind as I struggled to grasp Sutton’s bold disdain for all of cinema’s typical devices to carry meaning and significance. Left adrift without a plot or even dialogue to guide me, I was forced to find my way through the wash of images and the interplay of gestures and actions.

In many ways, Pavilion reminded me of the middle section of The Tree of Life, but because this was set in contemporary times I was drawn more to the realization that this is not how kids live their lives anymore. Without having to get nostalgic for the old, pre-computer/cell phone days, I instead focused on what it is that does mark adolescence: the awkwardness of wasting time, the bold realization that it is now, standing in a group under a tree, that will define who you are through what you say or through a stunt you perform or maybe, as in one instance, through a sudden awkward embrace of a friend. The utter futility of trying to define yourself when you are 15 is fully conveyed in Pavilion solely through gesture and blocking. The camera helps guide us through the state of unknowing that is adolescence and provides no easy answers—yet, at the same time, it conveys a sense of the sacred experiential NOW.

That now is exactly what is lacking so much in today’s experience, because the alternative reality of identity is created through someone’s iPhone camera when it is re-posted on their Facebook page or on YouTube. There was a time when the value of a moment was hyper-energized by the fact that it was truly passing and there was no redefining or re-contextualizing of that moment. Pavilion dramatically captures that idea of reality, through its personal creation of its own grammar via its lyrical pace (editor: Seth Bomse), evocative compositions (cinematographer: Chris Dapkins), and fluid framing of the lives of kids spent in constant motion. This is a world in which you, the viewer, are forced to look at the mundane in an immediate and raw way—not unlike how reality was like before we were overwhelmed by cell phones, ‘social media,’ and crafty corporate ‘genius’ marketeers who are leading us into the bold, new, insidious frontier of consumerism redefined. 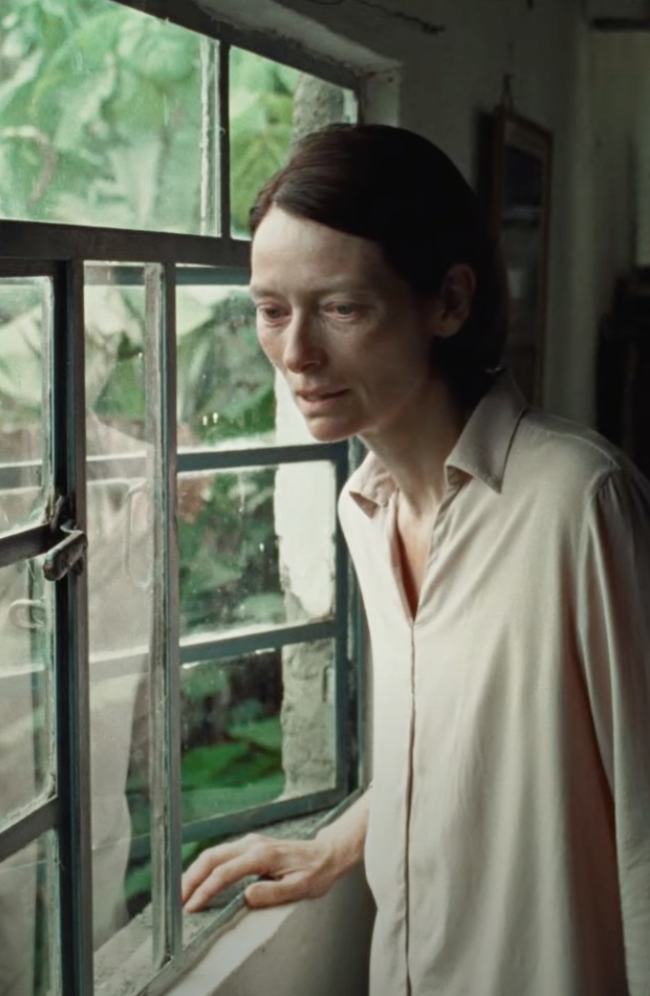