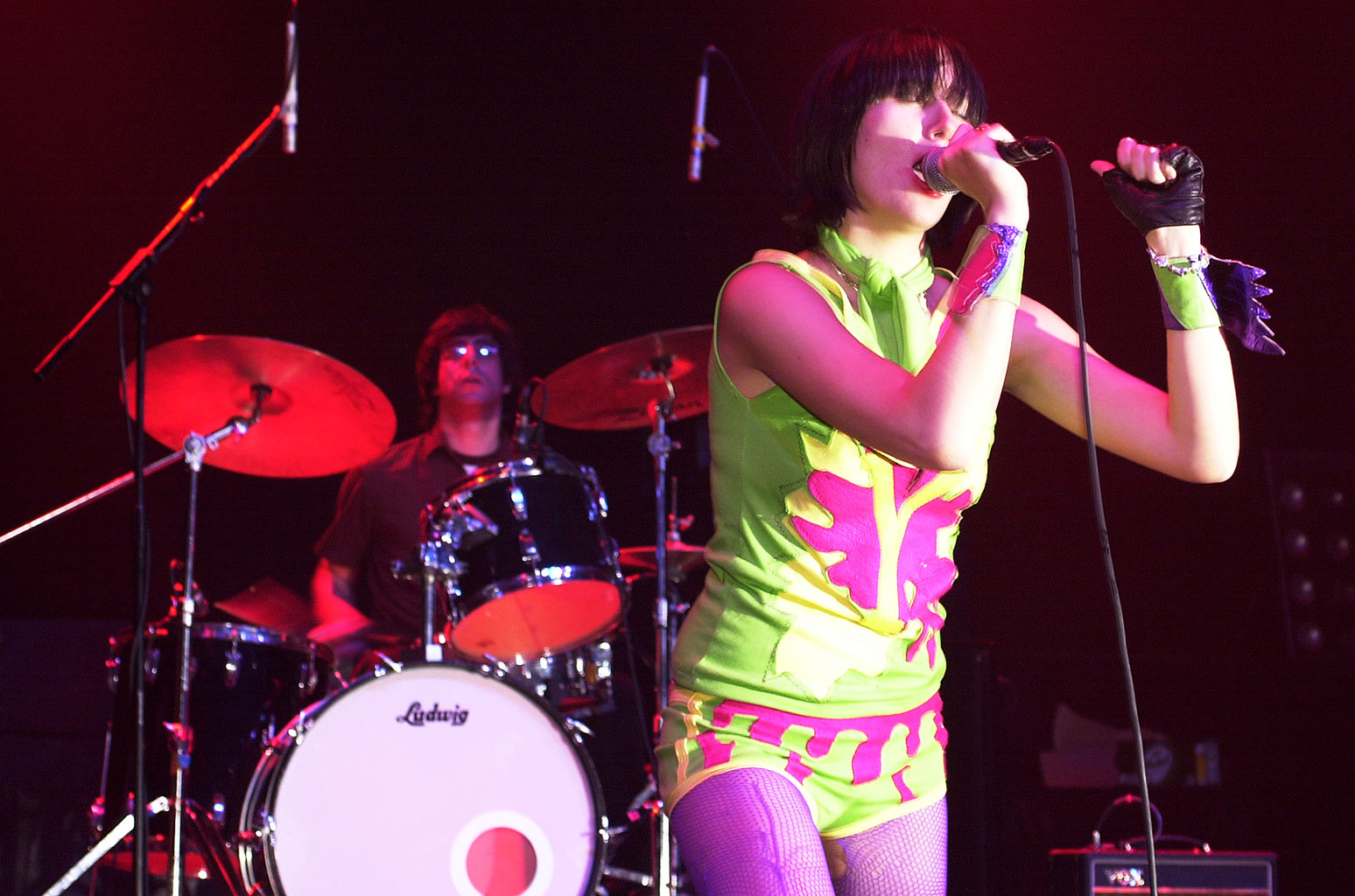 (The 2022 Sundance Film Festival runs January 20-30 all virtually. Check out Bears Rebecca Fonté’s movie review of Meet Me In The Bathroom. Like what you see here on Hammer to Nail? Why not pay just $1.00 per month via Patreon to help keep us going?)

The impressive depth of the film Meet Me In The Bathroom comes into focus near the end of the credits when you see the long list of contributing filmmakers and photographers whose work appears in the film. In addition to including a large number of names of people who are actually in the film, there are countless record labels, publicists, magazines, and friends of friends who just happened to have that all important footage of the Moldy Peaches apartment concert. Looking at a time in rock and roll when most inspiration had gone missing, when bands like Limp Bizkit, Puddle of Mudd, and Hoobastank limped murkily up the charts and when music just, well, stank, Dylan Southern and Will Lovelace’s documentary meticulously places us in the cheap rents of early 2000s Williamsburg Brooklyn and the explosion of what could either be called (depending on the critic) post punk revival, garage rock rebirth, or the new rock revolution. To inject personal preference, I go with garage rock revival and I credit The White Stripes with being the first proponent, and the UK being the first place they actually broke.

So many bands came out of that 5 to 7 years after 9/11 and before rents went up (which is basically the timeline of the film) and Meet Me In The Bathroom seems to at least have a sound clip or interview or performance by every single one of them. While Interpol, Moldy Peaches, TV on the Radio, The Rapture, Oneida, and Liars all share the spotlight, the trio headlining the film are The Strokes, The Yeah Yeah Yeahs, and LCD Soundsystem. At least with The Strokes and LCD Soundsystem it seems like there may be enough story for a film on their own. Instead, the documentary allows the casual observer to discover new acts and connections between artists and almost feel like they’re there at the Mercury Lounge where The Strokes are playing their weekly Wednesday residency, or at the dance club with David Holmes DJing the first time James Murphy tries ecstasy, or on tour hearing Karen O fielding misogynist questions.

The film wisely stays inside the five boroughs except for following countless bands to the UK or The Strokes being subsumed by MTV. I was ready to argue with the film if they were gonna follow the old line that “The Strokes saved rock and roll” when there were bands exploring the same sonic regions all over the world. In addition to The White Stripes, you have The Black Keys also playing Detroit, you have Spoon down in Austin, you have The Dandy Warhols, The Brian Jonestown Massacre, and the Black Rebel Motorcycle Club up and down the West Coast, and you have the Hives in Sweden and The Vines in Australia all refocusing rock back to the underground. Although I’m never ready to see images from 9/11, it was interesting to re-experience all the New York based headlines of the era, such as the blackout and various New Year’s Eve celebrations (remember the fear of y2k?).

The biggest difficulty the film has is knowing how and when to jump between bands, because just when you feel like something is about to happen with a certain act, we jump to a different artist. Maybe this documentary could have been a four-part 4 hour experience, there’s certainly more to digest here than revisiting some problematic legacy of a rapist comedian. I would have loved to have seen interviews from other members of The Strokes than just Julian and Albert. To reveal my bias of favorite band covered, I couldn’t get enough of James Murphy’s story. My favorite moment is him complaining that everybody was now able to use Napster to download all the obscure bands that he had been listening to and playing as a DJ for years, the foundation of his first single as LCD Soundsystem “Losing My Edge.” I can’t help but wonder if he may be singing about Interpol when he says “I’m losing my edge to the art-school Brooklynites in little jackets and borrowed nostalgia for the unremembered eighties.”

Like Ondi Timoner’s Dig! about The Dandy Warhols and The Brian Jonestown Massacre, Meet Me In The Bathroom is going to be an essential music documentary for years to come.

Sundance 2022; Meet Me In The Bathroom movie review; Dylan Southern, Will Lovelace