[EDITOR’S NOTE: As Master Muscles is such an indescribably original film, we decided for the first time that rather than publish a longer review by one HTN contributor in particular, it would make more sense to post three different takes at once.]

Cinema does not get more American than this. I confess that I don’t really know what I mean by that statement, and yet I feel utterly compelled to stick with it. From what I gather, Efren Hernandez’s Master Muscles is about an unexpected couple on a getaway from an urban apartment to a roadside rest stop to a beachside mansion, only with the typical heterosexual power dynamics being bracingly reversed. In this case, “he” is the passive and soft one and “she” is the dominant and (quite extremely literally) hard one. Shot with a found-footage aesthetic, Master Muscles nonetheless reeks of formalism, particularly with regard to Hernandez’s jarring and abrupt editing style, which propels everything forward. (Michael Tully)

What is the DNA of Master Muscles? Pseudo-documentary? VICE web show? High art? This bewildering short film made me feel disoriented and uncomfortable, and only certain kinds of very alive, prickly films can do that. It’s nominally about a young, hipster-ish dude (Efren Hernandez, also the director) who accompanies a black woman bodybuilder (Jehina Malik) on a roadtrip. They start by trashing an apartment, and end up in a palatial beach house, but where we’ve traveled is inconclusive. During this bizarro odyssey they take turns filming each other, and the camera between them acts as both witness and weapon in this strange relationship. By the time we arrive, and she’s ashing her cigarette in his mouth, some sort of queasy dominance has been established. The compulsion of this relationship (is it fetish? is it love?) propels the frames forward. The core of the film is the uncomfortable rapport between Hernandez and Malik, who give us nothing in the way of explanation. The film was produced by Calavera Films, a Brooklyn outfit whose credits include the animated films of Bernardo Britto. I look forward to seeing what other strange voices they bring to the screen. (Susanna Locascio) 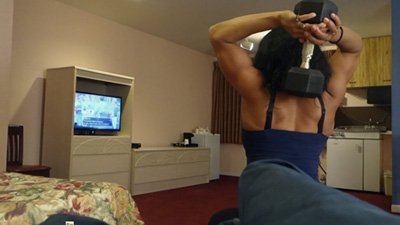 “Turn around for me. Turn around again. Show me your muscles.” Three simple commands, delivered with eerie calm by star Jehina Malik, bring us into the curious and utterly unique world of Efren Hernandez’s Master Muscles. But where, exactly, have we ended up? We seem to find ourselves on some sort of outlaw road trip to the Hamptons with a dominant/submissive couple (the gorgeous and jacked Malik and the plain but charming Hernandez) still exploring their nontraditional relationship. What will happen when they get there is left to our imaginations, and mine took it to some pretty creepy places. A destructive opening scene hints at the potential fate of the opulent home the two wind up at. But, who knows? Maybe they’re just there to spend a weekend playing out their power dynamic in style. In this case the old adage is true: it’s the journey that matters, in the end.

If the plot particulars are left unsettlingly vague, the relationship between our two travelers is anything but. Their female dom, male sub dynamic is instantly fascinating, in part because it’s something so rarely depicted on screen, but mostly because it’s just so damn believable. The two really nail the particulars of a power-based relationship. In one scene, Malik films herself riding Hernandez like a horse on a Long Island beach. In another, she playfully goads him into taking off his hat at a restaurant, asserting her control while simultaneously empowering him not to care what people think of his receding hairline. In what is perhaps my favorite detail, she films him eating chicken and asparagus—in real life, Malik is a trainer and the world’s only “vegan from birth” bodybuilder and the meal is exactly the sort of thing she would prescribe for the slightly soft Hernandez.

It’s refreshing to see the dom/sub thing used as a source of care and connection between two characters instead of a means of making the audience uncomfortable. I squirmed plenty at where things were heading, so hearing the two laugh at each other’s bad jokes was a welcome relief. And Hernandez gets a disarmingly naturalistic performance out of non-actor Malik that, combined with the handheld camerawork by the two stars, lends the proceedings an air of nonfiction. The found footage style, so often associated with horror movies, also shores up the menacing tone that pervades Master Muscles. In just over 13 minutes, Hernandez’s film creates a finely-detailed sketch of an atypical relationship between two people and leaves it to our own twisted minds to shade it in with the possibilities of their relationship with the rest of the world. Color me impressed. (Nicholas Kemp)