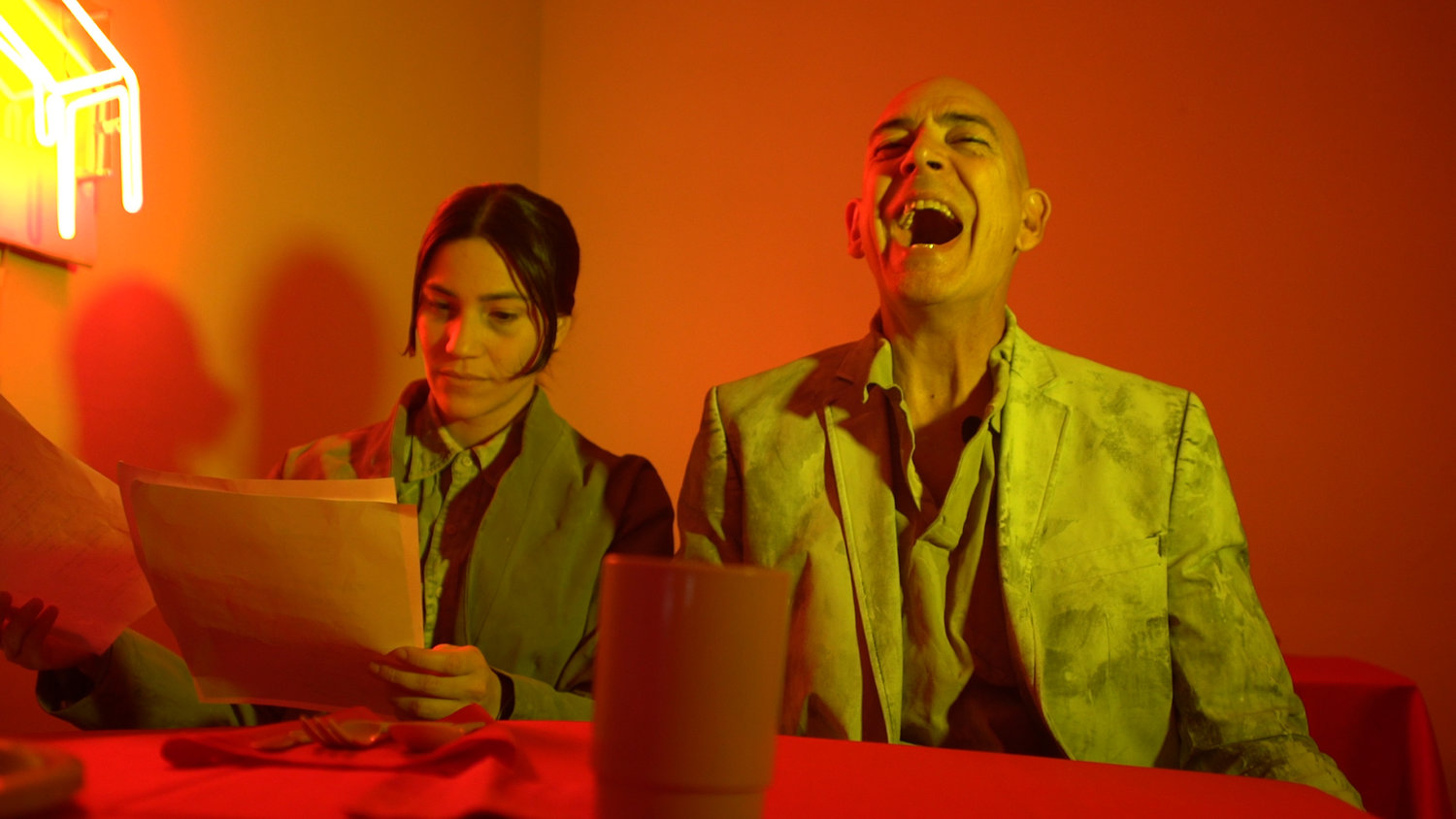 Is it possible to have too many ideas and yet absolutely no idea at all what your film is about? This is both the landscape of the Noel David Taylor film Man Under Table – as well as the strengths and weaknesses of the film. Taylor himself plays the lead in the film, which is not surprising because it is about a man trying to write a screenplay. His character has no name, which becomes a hilarious problem as the film continues as he tries to like pay for things with his blank credit card. ‘Screenwriter Guy’ is desperate to break into the industry and willing to do just about anything that you want. Pitch a script to the next table over at dinner? Sure. Show up to a meeting in an abandoned building? Sure. Include hot topics like identity politics and fracking? Sure. If it is something that he thinks will get him to the next stage of his career, he’s willing to do it. Unfortunately for Screenwriter Guy, his way forward seems forever blocked by the up-and-coming ‘it’ director Jill Custard who has the magic of #trending with everything she does. And then there’s the constant Lyle whose vlog on ‘Lyle TV’ runs everywhere all the time, mocking Screenwriting Guy with his ubiquitous success.

I’m not going to lie, this is a bitter, angry film made by a screenwriter obviously frustrated about his inability to break into the industry. It’s the sort of idea that one has and everyone tells them not to write. Maybe they leap into it and get 20 pages or so in and then realize they’re just complaining and they go off to write something much better. However, Noel David Taylor has the thing that nobody else has. He simply will not quit. Like his Screenwriter Guy character Taylor is willing to go to the depths of weirdness just to make this film. The more he writes into the screenplay the more his main character Screenwriter Guy writes himself into his own screenplay. When it turns out that there is a ‘man under the table’ and Screenwriter Guy cannot figure out who that man is and what he’s doing there it leads him to get under the table himself. This is a film where the characters never break the fourth wall, yet the entire film is a breaking of the fourth wall, sort of a super low-budget Adaptation as if it was made by David Lynch. This is one of the weirdest films made about a topic that’s not weird at all. Breaking into this industry sucks. If the rooms in Taylor’s version of Los Angeles are so smoky that one has to wear gas masks to walk through them, and people feel so out of touch with the latest trends that they’re on 90s laptops, and directors are apologizing to an actor for cutting them out of films they were never cast in but promising them an IMDb credit, then you know this film comes from the bitter, bitter heart of a true sufferer of the plague of ‘wanting to be a screenwriter.

In fact, it’s hard not to both love and hate this film at the same time. On the one hand Man Under Table has crammed so much great commentary on the industry into this film. On the other hand, it is filmed so slapdasherly with a sort of smugness that dares a festival to say no to it, as if that would just prove its point, it’s actually kinda frustrating that Slamdance didn’t say no to it. And yet its short running time of 80 minutes – once you accept its premise – does not overrun its welcome. If anything, there are moments I wouldn’t mind sitting longer in the uncomfortableness of not knowing what’s going on with the Screenwriter Guy. Or did I mean the screenwriter?

The casual misogyny directed at Screenwriter Guy’s nemesis Jill Custard and the lack of characters of color in the film does make me worry if there is a little bit of ‘white guy complaining about the world passing him by’ behind this film.  There’s even a moment where Screenwriter Guy has to tell his collaborator one of his characters can’t be ‘so homophobic.’ The older man in the scene doesn’t want his film to have “all not gay stuff.” Considering how much more access the white men of the world have to film school and can sit and argue about the importance of identity politics I couldn’t help but wonder if the film is a little too much satire of something out of fear rather than understanding. But given the benefit of the doubt, the film pushes right past that into conclusive fear OF understanding exactly that, considering the lack of success the Screenwriter Guy finds by the conclusion of the film. If it is a cry for help from the last great heteronormative white American male screenwriter, it is a cry left unheard. It is, however, a credit on IMDb, and that’s what matters.

Author’s Note: Man Under Table screened as part of Slamdance 2021. In 2019, Slamdance awarded a Grand Jury prize to Nicole Brending’s Dollhouse: The Eradication of Female Subjectivity in American Popular Culture, a film called out for transphobia by over a dozen critics (See here here here and here for examples) Slamdance has yet to issue an apology. The UK organization TransActual has a great explanation of Transphobia and other useful resources in case you would like to know more.