and Blu-ray through Criterion. It opened theatrically in New York City on Friday, July 23, 2010, and was also made available On Demand that very same day. Visit the film’s page at the IFC Films website to watch a trailer and learn more.)

Living under the ever-present specter of war and terrorism for the past decade or so has been an exhausting, infantilizing experience; bereft of the facts (which always seem hidden behind a veil of secrecy), America has been left to its emotions, unable to distinguish a deep sense of sadness and insecurity from anger and disbelief. Modern political life continues on under these new parameters, where cynicism and distrust vastly outperform progress and reconciliation. After a decade of self-inflicted wounds, it seems like the country will never find the will or the way to heal itself.

Todd Solondz has never been one to shy away from shame, regret and outrage. In his new film Life During Wartime, he takes an important step forward in his development as a filmmaker by finally building a work around mercy and forgiveness. As such, Solondz has finally made a film that addresses our politics without excoriating them; this is a movie about the unspoken need to be loved. Solondz has always been a political filmmaker and, as such, has always been misunderstood. In 2004, I wrote about his film Palindromes just after its run at the New York Film Festival: 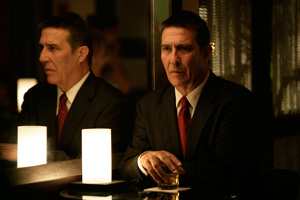 “While the headlines (and movies) continue to be dominated by the consequences of using American power overseas, there is a cultural crisis boiling beneath the surface, the deep divisions in the political environment merely an extension of the hypocrisy inherent in our so-called national values. Solondz exposes the rift between our declarations of morality and the reality of our behavior like no other filmmaker can, by exposing the cruelty and superficiality at the heart of our façade of concern and charity. In Solondz’s moral universe, a universe uniquely in tune with the tragic-comic reality of American society, every act of kindness has a heart of darkness.”

I have always felt for Todd Solondz because I always felt that America just didn’t get his joke. Too often, his films are read as scathing commentaries, his narratives bolstered by auto-critiques that seem to belie a defensive stance against the obvious cries of outrage at his treatment of his subjects. In the past—say, in the “Fiction” section of his film Storytelling—Solondz could build entire stories around the idea of tearing himself apart, using the built-in power of race, gender and disability as a way to trigger emotional reactions that play right into the larger points he was making about personal responsibility. From there, Solondz would layer in guilt, class and cruelty to explore the boundaries of human decency; the moment when Selma Blair’s Vi discovers photos of an ambitious classmate in bondage poses in the bathroom of her African-American professor’s home and bolsters herself with the phrase “don’t be racist” is a classic example of the complexity of Solondz’s sense of humor. It not only draws a line under Vi’s phony liberalism, but also cuts criticism of the moment off at the knees by acknowledging an awareness of the audience’s own judgments not only of Vi, but of the movie itself. 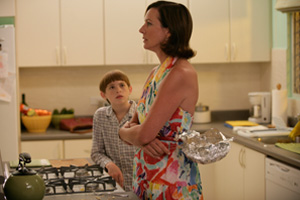 With Life During Wartime, Solondz gets over the hump of his defensive structural and narrative choices by abandoning himself to the idea that, instead of ultimately punishing their attempts at kindness, his characters instead need a little bit of forgiveness (a word which, it turns out, served as the original title of the film). The film picks up some years after the end of Solondz’s Happiness and serves as a sequel of sorts: Joy (Shirley Henderson) is breaking up with Allen (Michael Kenneth Williams), prompting a guilt-induced visit from the ghost of her ex-beau Andy (Paul Reubens); Trish (Allison Janney) has moved on to a new “romance” since her husband Bill (Ciaran Hinds) has been in prison on pedophilia charges, while their son Timmy (Dylan Riley Snyder) is confused about how to feel about his father in light of his own coming of age; meanwhile, Helen (Ally Sheedy) has become an über-successful screenwriter (ha-ha), and even more of a self-centered jerk for it.

But unlike Happiness, which juxtaposed the depravity of acting on our unmediated private fantasies against the façade of our social “selves”, Life During Wartime instead pits the irrevocable nature of personal history against the need to redeem it, to apologize, to grow and to change. And so, refusing the urge to use the film’s storylines to tear apart present day hypocrisy, Solondz instead creates a triumvirate of haunted (literally) characters in Timmy, Bill and Joy, whose quests to find ways to love themselves, to forgive themselves, runs smack into the self-involvement of Trish, Andy and Helen, whose lack of introspection and desire for a simple life of pleasure creates the perfect barrier to reconciliation.

Life During Wartime has its share of bright, funny moments (a discussion between Timmy and Trish about her relationship with her new boyfriend stands out as classic Solondz), but ultimately, the film is imbued with a sense of loss that culminates in a brilliant finale that brings Timmy, who spends the majority of the film coping with the revelation that his father was in prison for pedophilia, into a full-blooded encounter with the idea of letting go of the past, of the American dream of making of life what you will. It is the best scene Solondz has ever filmed, a heartbreaking moment full of expectation and need, of lost opportunity and repentance; it’s the perfect distillation of Solondz’s political vision. For all that his characters have endured these past few decades, it should come as no surprise that, in the end, the director’s compassion should come shining through. It’s what he’s been getting at all along.