I PLAY WITH THE PHRASE EACH OTHER

(I Play With The Phrase Each Other screens at Slamdance 2014 on January 18th and 21st. Visit the film’s official website to learn more.)

In the context of a zeitgeist that’s all about grabbing more information and faster from an accelerating stream of cultural sushi boats, I Play with the Phrase Each Other is kind of a punk rock statement. Writer/director Jay Alvarez takes his time, going deep and personal into the modern young adult experience, with a series of long monologues disguised as cell phone conversations. He has a wholly idiosyncratic writing style, willfully mannered and fond of old-timey words like pallor and folderol.

Alvarez gives himself a challenge that brings to mind The Five Obstructions, limiting dialogue to phone conversations and shooting on an iPhone. Actually to term them conversations is a stretch: they’re more like spoken mini-essays with infrequent acknowledgments from the person on the other end. They feel like trips into Alvarez’s psyche and worldview rather than any kind of exchange, but nonetheless effectively form the building blocks of the film.

The narrative follows four interconnected characters. Sean, played by Alvarez, is a writer who makes a living off of craigslist scams. As the film starts, he’s enticing his friend Jake (Will Hand) to leave their hometown and join him in “a city that reaches impossible states of pensive wistfulness.” Then just before Jake arrives, Sean’s apartment gets robbed and he disappears for a while. Jake has long, trenchant conversations with his other friend Zane (Alexander Fraser), and compulsively worries about the electric fields around him, amongst other things. Zane in turn is obsessed with a woman who won’t sleep with him: he finds a continuum from torture to pleasure in the information he gets about her sex life from her best friend. He goes on a rant against his own sexuality: “What does it say that orgasm is the only thing I share with every man wrenching his neck on the sidewalk?” 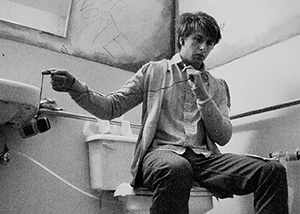 The three male leads all speak in variants of Alvarez’s particular brand of probing, florid prose. He’s fascinated by complex and obsessive motivations; the telling minutiae of human behavior; sex and power as they play out in impossible relationships and mundane workplaces. He’s paranoid, but he also delights in drilling down into layers of dysfunction, uncovering ironies and paradoxes and the strange logic of emotions.

I Play With The Phrase Each Other is an interesting development in the representation of young adults struggling with the new economy. Sean is unfazed by his lack of career opportunities and proselytizes for his concept of neon poverty. Jake: “You don’t understand how little money I have.” Sean: “How much do you have?” Jake: “Almost nothing.” Sean: “That’s plenty.”

Against all odds, the film manages to be visually kinetic, finding strong compositions and juxtaposing bits of movement, such as Jake’s restless pacing, with intense, static close-ups. The furiously grainy black and white cinematography evokes 16mm and creates a certain sense of dream space. Alvarez’s boldest move is the inclusion of a 10-minute medium close up of Jake’s former boss, as he listens to a customer’s voice mail in which all that he is is dissected and annihilated.

The fourth main character is Erin (Megan Kopp), Jake’s ex-girlfriend, who for much of the film also speaks Alvarez. She’s now dating a non-neurotic guy, and does a post-mortem on Jake’s obsessive, judgmental behavior back when they were together. She both embodies a variation on Alvarez’s persona and creates a lucid counterpoint to it, in her recollections of being suffocated by Jake’s tastes and his will. In the film’s final scene Alvarez shuffles the deck, cutting back and forth between separate phone calls in which Jake and Erin express opposing perspectives on their failed attempts to connect, which left both of them wounded. It’s tragic but somehow unsentimental, and emblematic of Alvarez’s willingness to withstand the pain of taking a long, steady look into life’s muck and mire.

Post tags:
I Play With The Phrase Each OtherJay AlvarezSlamdance 2014The Five Obstructions