HOW TO SURVIVE A PLAGUE

(How To Survive a Plague is now available on DVD

through MPI Home Video and at Amazon Instant

. It world premiered at the 2012 Sundance Film Festival and was picked up for distribution by Sundance Selects, opening theatrically on Friday, September 21, 2012, in New York, Los Angeles, Chicago and San Francisco. Visit the film’s official website to learn more.)

The film opens with the iconic images of emaciated people in hospital gowns typical of AIDS documentaries, but it quickly cuts to a packed and fairly chaotic meeting. The clumpy, smeared grain of the archival footage, shot on early consumer-grade video, conveys a sense of urgency, minimal resources, and DIY improvisation in the face of catastrophe. We’re witnessing a genuine grassroots movement spontaneously come to life where there had been nothing but death and despair.  It’s the early days of ACT UP New York, the original and most powerful chapter of the ACT UP movement. Director David France gives us a bit of context with a few title cards and thrusts us into the middle of an action against the foot-dragging of New York City Mayor Ed Koch.

How to Survive a Plague is a story with all the elements of great drama—the stakes are life and death, the villains are plentiful in the form of uncaring government officials and bureaucrats, and there’s lots of visually arresting action out on the streets. There are moments that could make rocks cry. A soft-spoken man with HIV is given an explanation of the risks and poor odds of success of an experimental drug; in hindsight his more resigned than hopeful answer is horribly poignant: “I understand that, and I’m willing to find out.” 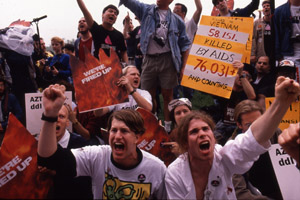 The film follows a timeline marked by a series of daring and often spectacular actions, targeting everyone from a local hospital to Cardinal O’Connor and the Catholic Church, from profiteering drug company Burroughs Wellcome to the seemingly impenetrable inner sanctum of the FDA.

Above all the movement has its people, and How to Survive a Plague masterfully weaves intimate moments with an amazing cast of characters into its narrative. These are genuine heroes blessed with an inner light, who step up to the fight with incredible vision, integrity and courage. And nothing less is needed: ACT UP’s struggle to change public policy with nothing but the determination of a few hundred people willing to commit civil disobedience is formidable.

Some unlikely characters end up making a fundamental contribution to ACT UP’s efforts. A housewife from Long Island named Iris Long, a trained scientist, shows up at an early ACT UP meeting and explains the science behind HIV and the inner workings of government health bureaucracies—planting the seed for ACT UP’s notoriously savvy team of treatment experts (who went on to shape national policy for AIDS research). Ann Northrup, a former CBS News producer, teaches the activists how to use the media to their advantage, and helps plan an action that gets AIDS activists in front of the cameras during the evening news. 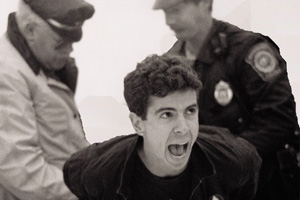 France and his collaborators’ tireless efforts to track down footage from myriad sources bring to the film a uniquely personal dimension. Activist Bob Rafsky is tracked through a series of birthdays spent with his ex-wife and daughter. He goes from handsome and vibrant to frail, drawn and covered in lesions in the course of a few years; clearly not far from death, he delivers one of the film’s most fiery and impassioned speeches. Ray Navarro is the brilliant artist/prankster who shows up at actions dressed as Jesus; he too fades away before our eyes, but speaks radiant words of hope even after he goes blind from CMV. Perhaps the brightest light of the movement is Peter Staley, a fearless and deeply principled former Wall Street trader with an astonishing gift for strategy and for clearly articulating the goals of the movement. His speech at the 1990 AIDS Conference is a thing of power and beauty, visibly winning over a skeptical medical establishment to his side.

But for every battle fought and won, the ultimate goal of an effective treatment for AIDS remains maddeningly out of reach. Admirably, the film doesn’t gloss over the bitter infighting within the movement as time goes by and the hope for a cure starts to falter. A scene where founding member Larry Kramer silences the bickering with a single word is like something out of the Old Testament.

It took a lot longer than expected and the death toll was and is catastrophic, but the basic level of reason and compassion that ACT UP fought for within the healthcare establishment led to effective policies and treatments that slowed the pandemic down to where it is now. To France’s credit, and to the credit of the surviving veterans of the movement (several of whom are dramatically revealed at the end of the film), this is not treated as a happy ending. There have been over 30 million AIDS deaths, and throughout the crisis too many people looked the other way. A lot of the issues that allowed AIDS to proliferate in the first place are still not being addressed today.

But the story of ACT UP is a powerful testament to human potential. In 2012—at a time when cynicism toward institutions is at an all-time high and there’s a desperate need for something bigger and more meaningful than clicking “like,” for a movement to believe in—seeing this film is a cathartic experience.

A Conversation with Zachary Wigon (THE HEART MACHINE)