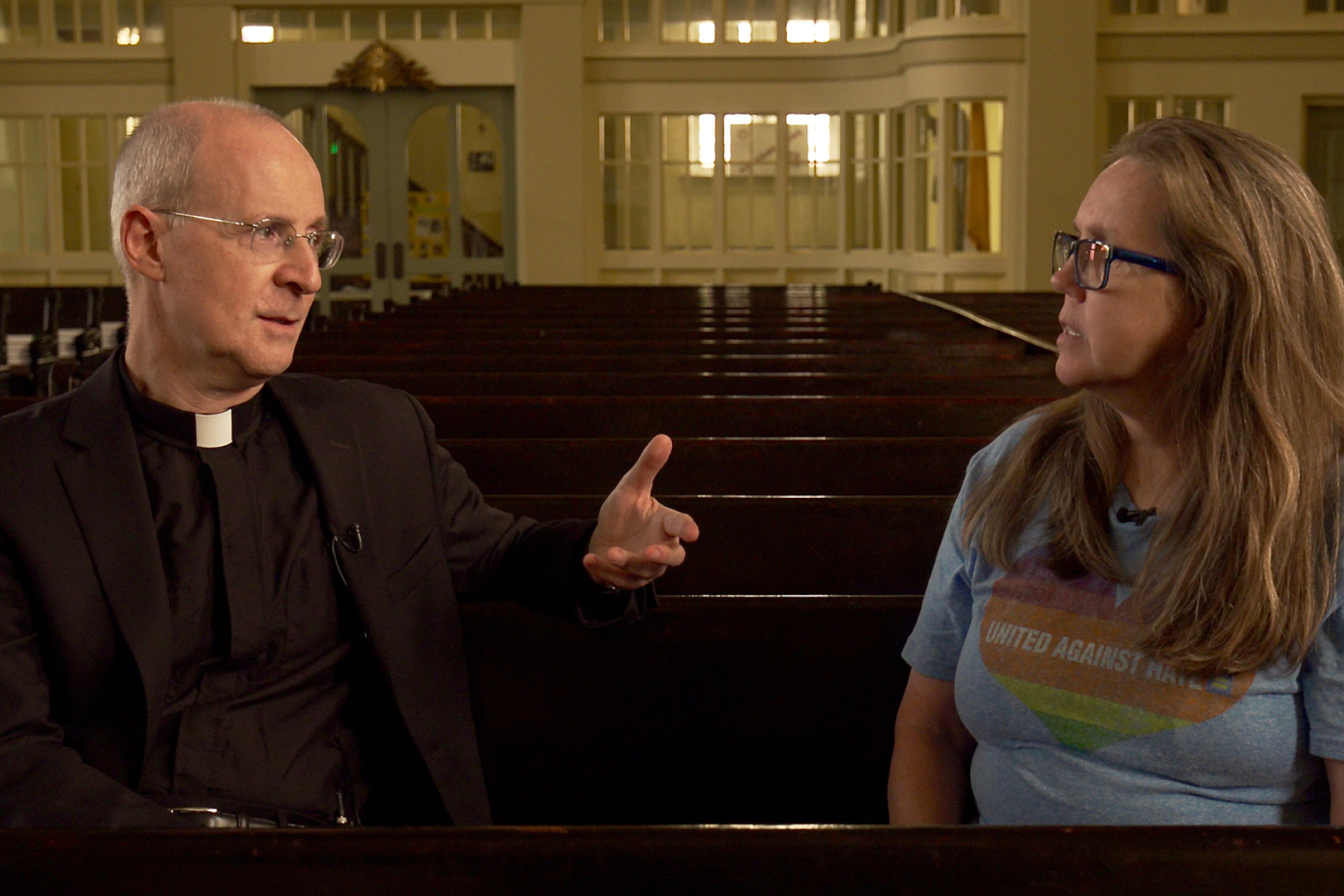 Building A Bridge takes its name from the book by Father James Martin, a book which has the subtitle of how the Catholic Church and the LGBT community can enter into a relationship of respect, compassion, and sensitivity. Written from the perspective of someone inside the church, the book has helped countless queer Catholics who have found themselves trapped between faith in themselves or in their God. It’s also, not surprisingly, caused quite a bit of stir amongst conservative Catholics, the same people who voted to not allow president Joe Biden to take communion this week because of his stance on abortion. Directed by Evan Mascagni & Shannon Post, Building A Bridge the film follows Father James Martin as he takes his convictions to communities inside America, out in the wider world, and as far as the Vatican.

Before I go any further in this review, I find that I must come out as a rabid atheist. I think religion often does far more harm to the common person both in its judgment of people living outside the societal norms and it’s embracing of conservative and backwards politics. Too often it is used as a tool of the wealthy and the privileged against the poor to keep them in their place and distract them with the hope of future happiness in heaven. It’s far worse on the interpersonal level when someone is made to feel like there is something wrong with them simply because they fall in love with someone of the same sex or because their body does not match their identity. James Martin is a much-needed advocate for the LGBTQ community inside a structure that would sooner send them to conversion therapy then to accept them as they could just as easily say god made them.

Martin reached his turning point after the Pulse massacre, horrified by the silence of his religion to support the victims. He felt that a large portion of his ministry was basically invisible and that it was time for the church to change and he wrote his book to begin to build a bridge to that community. Notably this last weekend was the 5th anniversary of the Pulse Massacre, which is also a moment of personal importance to me as it’s when I decided that I needed to come out as transgender. I’ve been down in Orlando for the last week attending the pulse remembrance service and celebrating with everyone as president Biden declared the site of the nightclub a National Memorial. It’s been a difficult but beautiful week.

I don’t know the background of the directors in relation to Father James Martin, but to a certain extent the film feels like an extension and continuation of the work done in his book. My favorite moment of the film is when he meets with a group of young queer Catholics who tell him the problem with his bridge metaphor is that it really implies that they have to do their part to come back and meet in the middle with the church, which isn’t fair at all because they’re not doing anything that they should come back from, they are living their authentic lives. To his credit, Martin agrees and writes a new foreword to his book, which this group gets to read and feel heard. A perspective like this is so important simply because of that. These are people who never get heard. A book is one thing, but a film has such a larger potential outreach and it does feel like the church is reaching some sort of breaking point. How can they continue to protect abusive priests while saying monogamous same sex couples are living in sin?

The film is also very clear that the Catholic Church really has a long way to go and most people don’t even want that bridge built or don’t understand why it needs to be built. Giving ample time, arguably too much time, to Michael Voris, founder and president of Church Militant, who makes his case in his alt right talk-at-you show the Vortex ‘where lies and falsehoods are trapped and exposed…about the homo-heresy in the church,’ Building A Bridge really does go above and beyond with that documentary ideal of showing both sides of an issue. Personally, I felt that there was way too much of Voris, who is currently being sued by a New Hampshire priest for defamation, which could (hopefully) bankrupt his organization. This man is vile and hateful and if the film wants to reach queer members of the Catholic Church who have been pushed aside, it’s very hard to ask them back and then pummel them with 20 plus minutes of hate speech from this asshole in the name of balance. Much of what he says is triggering although letting him talk so much really does reveal him to be a small minded and frightened individual who is just as much on the outskirts of his community as the people he is fighting. Voris’s company was once known as Real Catholic T.V. until the archdiocese of Detroit ordered he stop presenting his organization as Catholic, and regularly adds climate change denialism, anti-Semitism and Islamaphobia, to its blatant homophobia and transphobia.

While Building A Bridge does an excellent job of promoting James Martin’s ideas and telling his story, it also brings with it the unfortunate side effect of amplifying Voris and his alt right agenda. Though the film lives on the right side of the issue and clearly shows the way forward for those open-minded individuals, it’s hard to recommend that those who are easily triggered suffer through the pure vile of The Vortex.