Sharon Lockhart’s film Lunch Break was screened in the New Frontiers section of Sundance 2009. I think it was a bold move to include it since the Sundance audience is not an adventurous bunch. Though I may hesitate in describing the typical Sundance viewer as solely an entertainment driven thrill seeker, they do tend to prefer commercial product over anything formally challenging. I remember the general angry bus chatter the year Gus Van Sant’s Gerry premiered and so it was no surprise when there was a near riot at the first public screening of Lunch Break.

As is often the case on the first two days of the festival you get people who drop in and buy tickets for anything in order to simply justify the expensive hotel, flight and parking. Since everyone except impulse buyers had read the catalogue description and chose to stay away, most of that audience was made up of people who had no idea what they were in for. Sure enough, ten minutes into the endless, steady track down the aisle of a factory locker room, the grumbles and walkouts started. Arguments broke out demanding refunds, some claiming that it wasn’t a movie while someone else asked if the ‘projector was broken’. At any rate, poke around on certain websites’ comments sections to get a sense of how most people felt about the film.

On the other hand, I and many others were fully engaged by the film, which actually makes Michael Snow’s Wavelength feel like a Michael Bay action picture. Though similar to and perhaps inspired by Wavelength, Lockhart’s film is different in that it is a steady, slow tracking shot not to a receding point on the horizon as in Snow’s experimental classic, but through an unchanging, endless, horizon-less factory locker room. So there is no changing perspective because we are not tracking into any specific end point, nor are there any narrative indicators, as in Wavelength: no body, no actor (Amy Taubin) walking into the frame to focus our narrative urges, nothing here except an endless repeating track past workers eating their lunch or chatting on benches in front of a row of lockers.

As with Michael Snow’s work, Lunch Break is a Structuralist film, in that its intent derives from its formal shape. The narrative space of the film exists not solely within the frame but in the mental space created through a dialogue between the camera move, the activity within the space, and the ‘daydream’ within the viewer. ‘Meaning’ can be found through a triangulation of these basic parameters. To the common Sundance viewer, or to the typical Variety philistine film reviewer, this may sound like ‘arty mumble jumbo’, but I found the film to be extremely stimulating, invigorating, and dramatic. 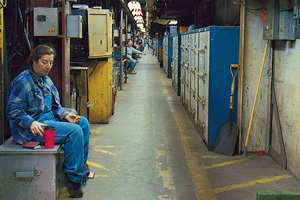 The obvious intent here, which is how I critically judge Structuralist films, is to ask myself if the film took me to a place that revealed more about the photographed space than was first revealed to my eyes. Did I get to see more about the true essence of this place than if I just glanced at a photograph or visited the actual space? With many of James Benning’s films (who is credited here as editor and sound designer), I come away with a very firm sense of the photographed space within a time continuum that is far more expansive than I would have ever pre-imagined.

In Lunch Break, I was taken back to the year I spent working for MTV in 1986. Though I was working with content, it was a straight day job, 9-7pm, and most of that time was spent in their midtown office in a small cubicle. I remember those one hour lunches well because I was miserable and knew I was wasting my life by punching the clock, but I was trapped by the need for the paycheck. Those lunches were precious and were haunted by the ticking clock; they were never long enough and though often spent alone, reading or writing, I always felt, by hour’s end, an overriding sense of pathetic futility. I felt the hours the weeks and the months moving past me as if the march of time was unstoppable. I even started to personify the march of time as if it were a cruel monster. I eventually quit and moved to Alaska but I hadn’t thought about those lunch breaks until I was sitting in front of Lunch Break the film.

Watching the slow crawl of the camera past breaking workers, I felt that the camera might even have metaphorical value in that it represented that devouring crawl of capitalism in general, over the course of time, not just hours but over years and generations. The passage of time is indeed unrelenting. By the end of Lockhart’s film, I felt thankful that my free time was less bounded than it was for me back in 1986.

As with all Structuralist films, you have to be able and willing to triangulate those basic three parameters in order to articulate the nature of the viewing experience. On the surface it may be an abstract experience, yet at the same time, if you give yourself over to it, you may gain an understanding of the space that goes far beyond the initial information brought to you through your eyes and ears. For me, Lunch Break gave me a familiarity with the space of that location which extended way beyond the borders of those dirty, grease-stained walls. In the end I felt a sense of my own temporality as I face that relentless, cruel crawl of time passing.