(The New World: Extended Cut is now available on DVD. Buy it at Amazon

Martin Scorsese once said The Thin Red Line was an endless movie of sorts, the type of picture he could come across on TV at any point and become completely enraptured with; like an ever propulsive river, it organically sucks you down into its path. Even Terrence Malick’s compromised official version, apparently some three hours shorter than the cut he originally delivered to Fox, is so expansive and sublimely transcendental in its look at the conflict at Guadalcanal that you never fully own its meanings as a viewer. This too can be said about Malick’s three versions of The New World, but more so in its new definitive incarnation than in its previous 135- and 120-minute cuts.

In his newest version, Malick gives each sequence a bit more time breathe, while breaking up what were once longer, more lugubrious scenes into elegantly centered mini-scenes. The story becomes at once richer and more detailed, but also more propulsive and accessible. He has given much more screen time to Smith’s initial voyage to make contact with the Powhatans and the long, brutal winter he spends in command of the expedition. I’m not sure if the changes in structure and emphasis enhance or reformulate the impression the film leaves the viewer with. Its slippery greatness was writ large in the earlier versions and nothing so radical occurs here as to dramatically alter it. Still, it feels altogether more considered and whole as a work.

While contemplating the film recently (one of its many pleasures is that it, unlike most films, courts “contemplation”), one phrase that’s been frequently jumping to mind is, “The grandeur of empathy.” That’s the neatest verbal approximation for what the film evokes in me every time I see it. Malick’s entire body of work, unlike any other American auteur of his generation, provokes the difficult questions, challenging conventional narrative techniques with purpose and vision while casting beauty and longing as its principle currencies. 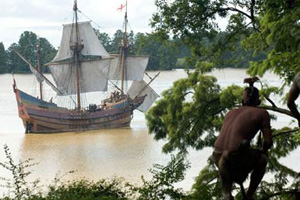 The grandeur of empathy at the heart of Malick’s technique consists of sensuous naturally lit compositions of nature’s many manifestations mixed within patterns of melodrama, violence and contradiction. These elements are filtered in haiku-like montages of narrative that eschew traditional point-of-view mechanics, which are taken on by an aching and philosophical voice-over that belongs as much to the Director as his characters, and is generously granted to all comers, be it Japanese or American soldiers, Native Americans or Settlers.

In The New World, Malick recapitulates this style while it strolls along the familiar American fable of John Smith and Pocahontas, a constructed myth that tries to reaffirm America’s best intentions. Malick perpetuates the fantasy of their romance, but undercuts the larger myth, showing all parties stumbling rather blindly and without mutual affection, toward the future: we glimpse the Jamestown Settlers as the poor hunters and starving cannibals they must have been (at least in that first winter), and the Powhatans as the first in a long, brutal procession of Tribes that would succumb to tides of European expansion. Yet we’re never invited to identify, in the traditional sense, with either.

Working with DP Emmanuel Lubezki to craft each and every image in the most naturalistic fashion possible, Malick shoots much of the movie in fairly unflattering light and spends much of his time watching his characters look at and touch the “new” world around them. This truly is an “adventure” movie in the most literal of senses and he finds amazing visual and aural approximations for these motions, juxtaposing the photogenie of pastoral wanderlust with jagged bursts of montage-fueled narrative. The fluidity roaming between various characters’ points-of-view via voice over invites us into the awe and ignorance, the gentle awkward humor and plain human moments, that this collision of civilizations must have wrought in those that were present. The film crafts a vision of America’s origins that is truly convincing, but beyond that not-so-small achievement, The New World: Extended Cut invites us to dream and toil, especially in the midst of a historic election season, for the America Smith alludes to in one of his voice-over’s most enduring passages:

We shall make a new start. A fresh beginning. Here the blessings of the earth are bestowed upon all. None need grow poor. Here there is good ground for all, and no cost but one’s labor. We shall build a true commonwealth, hard work and self reliance our virtues. We shall have no landlords to rack us with high rents or extort the fruit of our labor.