(The Deep Blue Sea bears no relation to the film of almost the same name in which Samuel L. Jackson is eaten by a shark. It is now available on DVD

and Blu-ray through Music Box Films. It premiered at the 2011 Toronto International Film Festival and was released theatrically on March 23, 2012. Visit its official website to learn more.)

Terence Davies can certainly strike a mood. So while The Deep Blue Sea‘s theatrical origins are occasionally quite clear—in one scene, no fewer than four people walk in and out of a single room, seemingly disappearing into the ether once they’ve left—any questions as to its cinematic merits are immediately quashed by the English auteur’s inimitable stylistic flair: sumptuous visuals, melancholy music. Davies, in adapting Terence Rattigan’s landmark 1952 play of the same name, evokes postwar England in much the same way as he has in the past: as a dreary but beautiful place rich with memory and sadness. Very little that happens would appear to lend itself to such lush presentation, and yet its look and feel are never anything less than arresting. Many scenes consist of little more than drawn-out conversations, but the light (whether from a bay window or nearby candle) that falls across the characters’ faces as they speak and scream and cry would seem heavenly were the actual content of these discussions not so often fraught with anger and betrayal. Doubly so, in fact, as true feelings are rarely what’s talked about; if they’re brought up at all, it usually comes in veiled references that hint at more than they reveal.

The plot concerns a love affair between the wife of a judge and a former pilot. Davies captures their apparently whirlwind romance by way of frequent short scenes blended together not so much as a montage but, more characteristically for him, as a series of fractured recollections whose peripheral details have been lost to time. He pans his camera slowly around the room that hosts these trysts, giving us a 360° aerial view of the lovers’ interlocking bodies, which at times are arranged as artfully and meticulously as still lifes. Hester (Rachel Weisz) is a troubled woman less inclined to verbalizing her feelings in a way that others can make sense of but quite given to looking longingly while taking in a cigarette; Freddie (Tom Hiddleston) is a mercurial drinker who quite simply isn’t ready for a woman like her. Early scenes between them are so sensual and nonverbal as to seem lifted out of The New World, only here the barrier isn’t language but, it turns out, something even more fundamental and divisive. 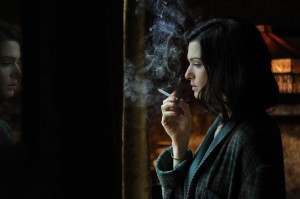 The Deep Blue Sea is no less sad than it is sensual, and its primary feelings—passion, desire, and longing—find expression through the intermingling of the two. Hester puts it thus: “Tragedy’s too big a word—sad, perhaps, but hardly Sophocles.” Lines like this one show she’s self-aware, but her accurate assessment of the state of affairs is hardly enough to keep it at bay. If her problems seem very much of her time, that’s part of the problem: Hester is confined by a long list of social norms and mores for which she’s rather ill-suited. She is, in effect, caught between a man she may not quite deserve and one who certainly doesn’t deserve her—she “marries the first man who asks her and falls in love with the first one to give her the eye,” a drunken Freddie says. Hiddleston is a talented actor, but the explosiveness of his line delivery can’t quite keep up with Weisz’s achingly subtle characterization. We can see as she gets truly lost in herself throughout, which all but seals how far gone she is from everyone else (not least those she’s meant to be closest to). Nearly every shot of her feels tailor-made to enhance this despairing loneliness, which Weisz gives breath to in stunning fashion. She’s chained by the exact thing that once freed her, and unable to lead a dissatisfying life. It’s a noble struggle, but also a fruitless one.

“Christ, let’s have something with a bit of life in it,” Freddie says upon walking in on Hester as she gazes out the window with a sad song playing on the radio; he could well be speaking of the entire film’s restrained veneer. Except there’s nothing but life here—it’s just nestled under a cold, doleful surface. Davies is clearly concerned with memory, which he knows distorts as much as it preserves. For him, a slow dance set to a song like the one on the radio at that very moment is both an artifact of the time and a reminder that whatever lay beneath its surface is never coming back.