(Sworn Virgin premiered at the 2015 Berlin International Film Festival and had its U.S. premiere on April 17th at the Tribeca Film Festival.)

Hana (Alba Rohrwacher) is a sworn virgin, a label for a small population of Albanian women who choose- by circumstance or desire- to identify as men. They play the patriarchal roles prescribed by their communities and vow to abstain from sexual contact of any kind. When Hana (turned Mark) decides to move away from the remnants of his rural village he travels to his sister, Lila (Flonja Kodheli), who fled to Italy at a young age in order to escape her arranged marriage. Mark interacts with Lila and her family as they live out a hybrid of modernity and custom forcing Mark to face the layered definitions of sexuality outside the confines of his strict upbringing. This fictional story is a balanced, beautiful, and intelligent meditation on the dynamic between gender and culture, the shaky reality of being a body in a world full of so much more. Sworn Virgin is able to compress the difficult conflict of sex and society into an emotional narrative that gorgeously whispers you into its space instead of blaring with self-importance.

In her feature debut Italian director/writer Laura Bispuri does not shy away from just how confused the landscape of gender is. Instead of confronting a duality she frames it as a continuum, culture a prominent force along the spectrum. Bispuri navigates the rough waters of belonging, the basic desire for connection, the inadequacies of language, the barriers created by tradition- the pieces of civilization that stand between who we are, who we want to be, and also who others want us to be. Recognizing how difficult it is to fully express gender through narrative alone, Bispuri draws on the visual world with an intensity rarely seen on screen. 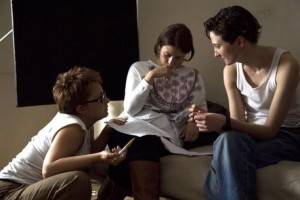 Hana/Mark moves through perfectly rendered imagery, even the character’s costumes are crafted with a hushed yet fierce symbolism; an atmosphere of placid blue Albanian countryside punctuated by the occasional hard rifle shot, cold Italian cityscapes with warm, glowing pools of water brimming with synchronized swimmers, the rigid jeans and scratchy gauze of a woman trying to mask her physicality. Lipstick is a signifier of femininity, exteriors are constantly expressing interiors. Manufactured gender roles stream through our lives, some inherited, and others merely trends fueled by capitalism. Buspiri recognizes the difficulty in becoming oneself when identities are built, and sold, around us. The story is an emotional exploration of physical existence, the type of narrative that can only be told through film.

Sworn Virgin sings with talent, from the editing, to the acting, to the tackling of a topic that is really only just beginning to find a voice. Buspiri has made a film that reminds us why films are made, harnessing a version of the real world with a poignant control to express a story that lends itself to be seen. The film moves beyond the question of what makes a man a man, or a woman a woman- beyond the Bechdel test- and instead asks what makes a human being in the artificial world we have created, a question made even more intriguing by the inauthentic reality of the very medium it is posed in.