NOBODY NEEDS TO KNOW

(Nobody Needs to Know is screening at BAM on Wednesday, August 13th, but even better than that, Jacobs has put the entire film online for free. Go to the film’s official website to watch it for yourself.)

It must have been difficult for Azazel Jacobs to find his own cinematic voice, considering the father who spawned him: legendary experimental filmmaker Ken Jacobs (Tom, Tom The Piper’s Son, Star Spangled to Death). Most children’s first awakening to the movies consists of soaking in mainstream narrative entertainment. It isn’t until later, as teenagers or young adults, when the mysteries and glories of independent, foreign, and experimental films are discovered, after some measure of conscious digging. This wasn’t the case for the young Jacobs, who grew up in a household where experimental cinema was the familiar face and narrative cinema was the stranger. How to merge those two different universes, then, especially considering one’s reverse path to a more fully developed cinematic education? After only three features, Jacobs appears to have found his true voice with the achingly personal, bittersweet Momma’s Man, one of 2008’s towering achievements in independent film. While his sophomore effort, the equally accomplished though superficially different The GoodTimesKid, reflects the same unforced, unpretentious, tender meshing of experimental and narrative elements—not to mention unique fusion of humor and sincerity—that has earned Jacobs a retrospective at BAM after only three features, his audacious debut, Nobody Needs to Know, comes from a much more overtly stylish place.

Nobody Needs to Know is a hypnotizing, black-and-white document of life in early-21st Century New York City, a neurotic, dizzying world in which everyone appears to be at constant battle with themselves. While Jacobs’ targets are the absurd and preposterous fashion and film industries, he manages to ride the line between satire and snarkiness, poking fun at the people within these worlds without being overly malicious. The film most directly focuses on a disillusioned actress, Iris (Tricia Vessey), and her model/actress roommate, Mira (Liz Stauber), but it also takes the time to introduce a confused male actor (Norman Reedus) and an even more confused director (Matt Boren). That director, Jonas, is clearly overwhelmed by his position, and as actress after actress arrives for an audition scene in which they die melodramatically while wearing lingerie, the absurdity of the situation threatens to crack him into a thousand pieces (not to mention the realization that he’s already found his star in Iris but she isn’t anywhere to be found). While there isn’t much in the way of traditional narrative, ultimately, the film is about Iris, and her eventual decision to turn her back on the city and the grotesque phoniness that surrounds her. Does she actually leave it once and for all? Jacobs doesn’t give an explicit answer to this question, but all signs point to the affirmative.

Early in the film, a black man spots Jacobs’ camera and disappears into it, becoming the film’s smooth-talking, omniscient narrator (later, a white man joins him). It would be interesting to discover if this was a conceit written into the script, or if it emerged in the editing room as a way to add more flair to the proceedings. At times it feels like Jacobs might have been unsure of his footage and felt the need to spice it up a bit, while at other times it feels like a highly original way to present the organism of New York City as a living and breathing creature unto itself. Visually, Jacobs shows establishing shots of the city throughout, from up close, from afar, from the ground, from above, to remind viewers that, in this particular metropolis, the city calls the shots. By adding an actual human voice to this visual presence, he brings it to life more completely. 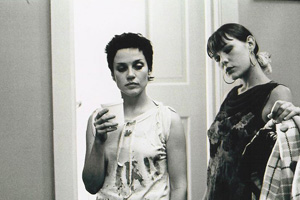 Stylistically, Jacobs is on the attack here, which makes his subsequent films seem all the more revelatory. For as impressive and fascinating as it is, Nobody Needs to Know feels like a brash, vigorous young filmmaker trying to single-handedly redefine cinema through brute confidence and force, unleashing a never-ending torrent of visual and sonic manipulation that firmly entrenches the film in the experimental camp. But one thing is clear: this isn’t merely for the sake of style. Jacobs’ sound design reflects just how layered and noisy life in New York City can be. In turn, it becomes an accurate representation for each of these characters’ states-of-mind. The voiceover that speaks to—and for—each of them, also has a purpose: it acts as the voices of both their own consciences and the conscience of the city itself. Jacobs’ roaming camera and brisk editing further establishes the hyper-fast, jumpy rhythm of the city, a place that can make even the calmest, most relaxed person feel frazzled and frayed.

On its own, Nobody Needs to Know is an assured, impressive debut, but overall, Jacobs comes off as being perhaps too eager and excited to make a gargantuan, visionary splash. Still, in the context of his subsequent two films and the boundless future that awaits him, it becomes mandatory viewing, in order for viewers to witness the birth of one of independent cinema’s most important new directors.