(Super, Girls! screens at BAM on Wednesday, April 29. It’s also available on DVD and as a digital download from dGenerate Films.)

One of the oddest things about traveling is the back-and-forth mental shuttling between difference and familiarity. You’re amazed by the seemingly infinite variety of the world’s customs, cuisines, sights, and sounds. But you’re also struck by how people really are the same everywhere, once you go below the surface.

These thoughts ran through my head as I watched Jian Yi’s 2007 documentary Super, Girls!, which follows a handful of aspirants competing to appear on the Super Girl singing contest, a Chinese reality show that premiered in 2004. The victor of the 2005 season, Li Yuching, became a megawatt pop star, winning the votes of hundreds of thousands of fans and going on to a successful recording career. Yeah, it’s American Idol, the Chinese version. (Idol itself was a spinoff from the UK’s Pop Idol.) I’ve never cared much for that show, but theoretically at least, I could imagine being more interested in seeing a documentary about the people who want to appear on it—and Super, Girls! bears that out. Jian’s subjects are trying out for the 2006 competition, and his movie takes us from the early open-call auditions to the regionals to the national finals. These young women, whether office workers, college students, trust-fund kids, or dirt-poor peasants, speak the universal language of today’s global youth culture. In many ways, the movie could take place in almost any country. Here as everywhere, pop offers the promise of unlimited glamour and glory. Here as everywhere, the rich and well-connected have an unfair advantage. But here as everywhere, looks and talent and star presence can’t be bought or manufactured, and everyone has at least a fighting chance. 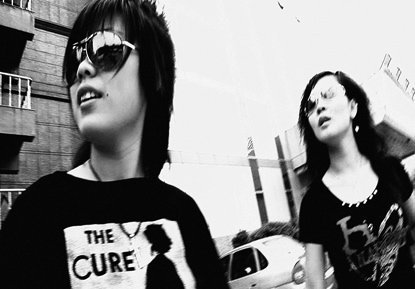 However, I suspect that what many American viewers will find most compelling about the film are its culturally specific insights into contemporary China—remarks delivered off-handedly, in passing, that illuminate some of the society’s deep-rooted beliefs and assumptions. The aforementioned peasant girl, dressed in a Maoist-throwback uniform, speaks movingly of her hard-luck background and concludes that she wants to be on the show because she’d “like to see [her] destiny changed.” (Americans, of course, tend to believe in a pre-determined destiny about as much as we believe in Zeus.) Wang Yu’nan, a student at a vocational school whom we first glimpse hustling ball-point pens to her fellow auditioners, talks of her parents’ divorce—her father is doing well and gives her some money, but her mother is having a tougher time, since “she’s a woman, after all. Plus, she’s honest, and she isn’t particularly assertive.” Yu’nan, the closest thing we have to a central character, wins us over with her forthrightness and openness, even at her nuttiest: she tells a skeptical friend that the only reason the average Chinese person is worse off than the average Japanese or South Korean is that Japan never paid the proper compensation it promised after the second Sino-Japanese War.

It’s been said that the USA is both the youngest of the great world powers, and also, paradoxically, the oldest, since we were the first to experience so many innovations of modern life. What comes through most clearly in Super, Girls! is its portrait of a very old culture rushing headlong into the hyper-capitalist future, in which business values trump all others, individualism clashes with traditional ideals of collectivism and community, and self-promotion lays the smackdown on Confucian humility. When the national finalists gather onstage to sing the show’s theme song, we could be listening to an American pop anthem, but really, it’s a lyrical expression of a dream that has long outgrown its Hollywood and Broadway origins and taken over the world: I’m empowered by joy. I shine like no other. Every caring eye sees my growth. Although Super, Girls! structures itself via the timeline provided by the rounds of competition, Jian doesn’t push things too hard—he understands there’s no need to hype up the suspense unnecessarily. Some contestants win, some lose, some surrender their hopes while others vow to try again another day. But the real drama here, the heart of the film’s appeal, is the view it provides of an entire nation in the grip of massive, all-encompassing change.