(Kevin B. Lee’s website features all of the Shooting Down Pictures essays and videos. Lee’s YouTube page also carries the videos, plus it enables you to watch them full screen.)

Kevin B. Lee is a New York-based filmmaker and film critic who has lately been combining his two passions in a series of online video essays. These essays, grouped under the title Shooting Down Pictures, are responses to the “1,000 Greatest Films of All Time” list compiled by the website They Shoot Pictures, Don’t They? For some films, he writes a blog entry; for others, he composes a video clip with voiceover narration. Lee’s far from the first to practice film criticism in this manner—DVD commentaries work the same way, and countless teachers have been doing something similar for many years—but he’s an exceptionally perceptive and knowledgeable critic, and along with his impressive productivity, plus the nearly universal (for now!) accessibility of the Internet, that has made his work a notable standout in this still-evolving form.

(That same “nearly universal accessibility” recently got Lee into trouble: YouTube, where he has posted over a hundred videos, shut down his page for copyright violation for a few days in January. Read his account of the debacle, and what he learned from it, here, and check out the links as well—the issues raised have far-reaching implications for anyone involved in making and posting creative and/or critical work online.)

Most of the video essays employ the standard tools of traditional filmcrit: a combination of formal and stylistic analysis, historical and biographical background, interpretation, and opinion. But in 2007, Lee made two essays that incorporated elements of autobiography as well: the first used a scene between a grandfather and grandson in Euzhan Palcy’s Sugar Cane Alley as a launching-point for Lee’s reminiscences of his Taiwanese grandparents, while the second, on Kazan’s America, America, was a meditation on the life of his immigrant father. Last year, Lee went farther in this direction, fusing clips from Suzana Amaral’s 1985 Brazilian drama Hour of the Star (A Hora de Estrela) with found footage, still photos, and home-video footage into an essay about himself and his mother. (Hour of the Star is number 902 on the “1,000 Greatest” list, and the forty-third Lee has commented on, hence the unwieldy title.) 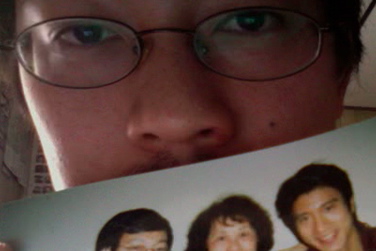 A short clip from Hour of the Star—a scene in which the hapless heroine fantasizes about being a famous diva—begins the piece, with Lee telling us in voiceover how watching the movie reminded him of his own adolescent dreams of success in the entertainment world, and also made him think of his mother, a Taiwanese immigrant and office worker infatuated with Chinese soap operas and pop songs. As a boy, Lee idolizes Axl Rose and Tom Cruise. As an undergraduate, he takes a Chinese-language class with Lee-hom Wang, a fellow Taiwanese American who soon finds massive fame in Taiwan as a pop singer and movie actor. Children of Asian immigrants know it’s bad enough to hear about how Mrs. Chan’s son got into Harvard Law School or Mr. Park’s daughter married a millionaire. Now imagine your mom giving you grief because your college classmate is one of the biggest stars in Asia, and you’re a thirty-something divorcé posting strange little videos on YouTube. Oh well, Lee’s mother may not approve of her son’s filmmaking ambitions, but at least she can brag to her friends that Kevin knows Lee-hom Wang personally. “I can’t help,” Lee reports in his dryly funny voiceover, “but feel a double standard at play.”

In just under eight minutes, the video covers a lot of ground: it’s a touching and unsentimental portrait of a mother-son relationship, an insightful rumination on cultural differences, and a love/hate letter to pop culture—Lee really nails how pop fuels our dreams and brightens our days with moments of joy and transcendence, while also sending us crashing back to earth with its unattainable promises of glory and grandeur. In addition, the form of the video points toward the new modes of cinematic expression taking shape in the digital-video/Internet era: this delightful hybrid is simultaneously a movie review, a blog entry, a documentary, a memoir, and a piece of cultural criticism. As a final note, I can’t help but be tickled by the fact that Mrs. Lee, singing her heart out to tinny Asian pop songs on her living-room karaoke machine, is now some kind of movie star, thanks to her put-upon son.