(Roman Polanski: Wanted and Desired is now available on DVD

through HBO Films. Visit their website for more information and to watch a trailer.)

With a documentary such as this one, which examines the pandemonium and questionable legal prudence surrounding the infamous prosecution of Mr. Polanski in 1977 on statutory rape charges and his subsequent flight from justice, you might expect a fairly dry courtroom procedural interspersed with a smattering of contemporary interviews and archival footage.

Yes, there are talking heads, those of Polanski’s defense attorney (Douglas Dalton), the assistant district attorney who brought the case (Roger Gunson) and, most strikingly, the victim herself. There is also a wealth of archival news footage of Polanski’s myriad court visits but, in a nod to Kevin Rafferty’s 1992 documentary “Feed,” director Marina Zenovich is focused less on the judicious use of soundbites here than the uncomfortable pre-roll moments that expose the posturing and salacious fatuousness of the news corps covering the event.

These things aside, what makes this exercise truly remarkable is Zenovich’s thorough knowledge of Polanski’s canon and the ways she subtly argues that the exorcism of one’s basest and most deviant desires belongs in a realm of artistic expression and not in the arena of the flesh-and-blood. When Polanski explores his idiosyncratic obsessions on celluloid, he is lauded as a brilliant artist; when these obsessions are indulged on a physical plane, Polanski is vilified as a dwarfish icon of perversion and criminality. 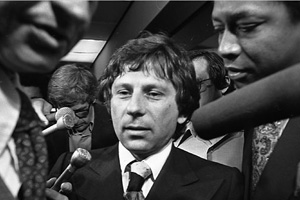 Zenovich never, even for an instant, excuses Polanski’s behavior or makes an argument for his innocence. What paints Polanski as a particularly pitiful creature is his awesome obliviousness (whether it be willful or otherwise is a subject for debate) to the social mores he violated in Jack Nicholson’s jacuzzi on the evening of March 10, 1977.

Gunson recalls, in a cunning move, how he took in a Polanski marathon at the NuArt movie theatre in Los Angeles while building his case against the director, viewing “Knife in the Water,” “Repulsion” and “Chinatown” among other films. Speaking with the authority of a film theory professor who is putting together a textbook exploration of Polanski’s psyche as represented through analysis of his filmography, Gunson makes the ingenious case that his mark was obsessed with the intersection of water and the corruption of innocence. Considering that Gunson was entrusted with prosecuting someone who was accused of plying a pre-teen with champagne and Quaaludes and sodomizing her in a hot tub, this makes for a particularly damning case.