(Restrepo is now available on DVD

through Virgil Films and Entertainment. It was distributed theatrically by National Geographic Entertainment. It opened in New York City and Los Angeles on Friday, June 25, 2010, before expanding in the following weeks. Visit the film’s official website to learn more. Note: This review was first posted on June 25, 2010.)

To say that Sebastian Junger and Tim Hetherington’s Restrepo starts with a bang is not to dabble in generic wordplay. This one-year chronicle (mid-‘07 to mid-‘08) of a platoon of American soldiers stationed in Afghanistan’s deadly Korengal Valley lets you know right away that the sole agenda of Restrepo is to present a faithful document of soldiers who are on the ground and in combat. And this is exactly what gives the film its raw power. While Junger and Hetherington include the typically more detached technique of talking head interviews, they only do it with these particular soldiers, whose eloquence and intensity only makes the overall experience more enlightening and engrossing.

You probably know by now that these award-winning filmmakers (2010 Sundance Film Festival Documentary Grand Jury Prize) first made their names in other fields: Junger as a writer (The Perfect Storm, A Death in Belmont), Hetherington as a photographer (Long Story Bit By Bit: Liberia Retold). As journalists, both men have always made it a priority to reveal the humanity of their subjects before all else, and they certainly do that here. Beginning with Private First Class Juan “Doc” Restrepo, whose last name does not only provide this film with its title—it is also the name of the outpost Restrepo’s platoon successfully establishes at such an integral spot in the valley. I will let you discover why Restrepo earns both honors, though if you don’t have at least a hunch then you’re the innocent type of person who definitely needs to see this documentary. 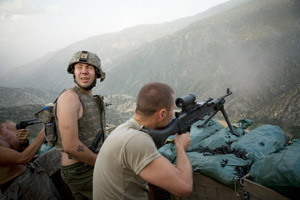 As for other soldiers, the baby-faced Specialist Mischa Pemble-Belkin is the most intriguing figure in the 15-man outpost. A self-proclaimed child of Pacific Northwestern hippies who wouldn’t let him eat sugar or play with toy guns, Pemble has a relaxed, creative aura that clashes harshly with this environment. It might be a stretch to compare Pemble to the young hero of Elem Klimov’s staggering Come and See, but that thought came to my mind, nonetheless.

Without preaching or overtly nudging at the political, Junger and Hetherington nonetheless make an unsettling and convincing case for the impossibility of “winning” this current war in Afghanistan. The enemy is impossible to distinguish from the area’s innocent residents, the terrain is incredibly difficult to navigate for non-natives, and there remains an overriding feeling that there just isn’t a concrete goal to pursue. But even with this rising, irrefutable feeling, the filmmakers stay focused on the soldiers and make sure not to edit their film in any politically pointed direction.

Being a soldier isn’t all about fighting. Junger and Hetherington are careful to show the boring hours of downtime, standing guard, twiddling thumbs, cracking jokes, and waiting for action to happen. They present this in such a way that the combat footage becomes even louder and more disconcerting when it does arrive. As viewers, once we’ve heard bullets and bombs and seen the panic on these soldiers’ faces, there’s no way to forget where we are. From the very first sequence of Restrepo, we are no longer watching soldiers in Afghanistan. We’re right there with them.

If war is messy and complicated, then the current fight in Afghanistan is an absolute clusterf**k.