POSITION AMONG THE STARS

(Position Among The Stars world premiered at the International Documentary Festival Amsterdam this past November and walked away with both the VPRO IDFA Award for Best Feature-Length Documentary, and the Dioraphte IDFA Award for Dutch Documentary. The film will have its international premiere as part of the 2011 Sundance World Cinema Documentary Competition, first screening on Friday, January 21st at 12pm—more Sundance screening info can be found here. Visit the film’s Facebook page to learn more.)

Position Among the Stars follows Dutch filmmaker Leonard Retel Helmrich’s other award-winning documentaries: The Eye of the Day, filmed in 2001, covering Indonesia’s countrywide revolution that saw the resignation of then-president, Abdurrahman Wahid; and Shape of the Moon, shot in 2004, which won the World Cinema Documentary Jury Prize at the 2005 Sundance Film Festival. Position concludes Helmrich’s in-depth and deeply moving portrait of the Sjamsuddin clan, a family that resides in the slums of the teeming, impossibly chaotic city of Jakarta.

Grandmother Rumidjah, a devout Christian woman from the countryside, tries to valiantly navigate a rapidly changing, and, oftentimes, violent and ruthless society. Routinely at odds with her two grown sons, Bakti and Dwi, both of whom have converted to Islam and are raising their children Muslim, Rumidjah’s most profound tussles and conflicts arise with her teenaged granddaughter Tari, orphaned since age five. Tari has been raised by her grandmother in the countryside until about eleven years old, at which time Rumidjah sends her to live in Jakarta with her Uncle Bakti and Aunt Sri, a couple who have, obviously, not provided the girl with a lot of discipline and structure, preoccupied as they are by their own domestic issues. Rumidjah’s insistence that Tari attend university and raise the family’s status in hopes of a better existence is the old woman’s overriding imperative. She seems to know better than anyone that the biggest obstacle to this goal is the unrelenting influence of modern life in the big city, which she sees first-hand when she comes to Jakarta to attend Tari’s high-school graduation and orchestrate the young girl’s admittance into university. Her values and world-views are, repeatedly, thrown back in her face on a daily basis by her children and grandchildren, and she pays a price for her own relentless ambition. 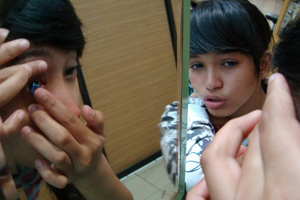 Spending her teenaged years in Jakarta has certainly broadened Tari’s world in terms of mall culture, social networking and pop idolatry, for the simple country girl has turned into an urban brat of the highest order. Even when her grandmother pawns her house, the only thing of value she owns, to pay for Tari’s school, the girl is contemptuous, disrespectful and surly. In this generational tug of war, the conflicts and moral conundrums between Christianity and Islam within one family only complicate things in an increasingly complex and fast-moving world. The reason grandma pawns her house is because Tari has been turned down for government funding for her schooling due to the fact that she cannot recite the five pillars of Islam since she’s been (loosely) raised a Christian. In one scene, when her Uncle Bakti is berating her for refusing to accompany her grandmother to church, she notes, sarcastically, that her Muslim uncle rarely, if ever, attends services at the mosque. Indonesia is the fourth largest nation in the world and the largest Muslim community on the globe. In the massive city of Jakarta where “you can’t see the stars,” for most people living in what amounts to a mosh pit of poverty and squalor, it is impossible to determine what one’s position might be, how it might align with the larger universe. This, of course, makes for an environment rife with mass corruption on the part of religious leaders who have great influence on how the country is run and to whom goes much-needed financial support. In the slums, we see that an individual can only look inward to selfish concerns and petty needs in order to survive (and have a TV and a motorbike). It is each man, woman and child for him- or herself. This makes for some raw and, oftentimes, fantastically entertaining family drama.

Visually stunning examples of this atavistic myopia are beautifully reflected in the ways in which we see this maelstrom through the malleable and acrobatic lens of Helmrich’s camera and that of his colleague, Ismail (Ezther) Fahmi Lubish. We glimpse the world (upside down) through the sublime prism of a single drop of dew, or from the perspective of a hefty cockroach splashing its way through a tureen of soup on a kitchen counter to escape noxious gases that keep dengue fever at bay. We follow closely behind a scabbed rat, its long scaly tail trailing through the mud into a hole beneath a house. We also soar above mangrove trees into the open sky, and chase a little boy through the narrow alleyways of the slums as he pretends to be Batman, his cape consisting of two men’s shirts on hangars stolen from a clothesline flapping behind him. 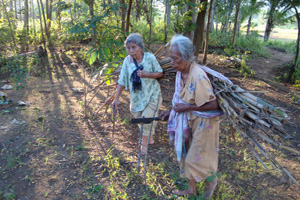 The two-hour installment of this saga is told through vivid imagery that is captured with exhilarating camera movements—graceful, playful, light on its feet like the most lithe and weightless prima ballerina. As a viewer, you cannot feel but deeply connected to these people with an immediacy that will take your breath away. Because of this intuitive way of shooting, this proximity that goes beyond “intimate access,” it doesn’t really matter whether you’ve known the Sjamsuddin family for the past decade, or whether you’ve just spent ten minutes with them. There is a vested tension in every aspect of filmmaking that is exciting, immediate, organic, a sure-fire rhythm to the pulse and beat of lives lived from moment to moment. Just as certain stars are given significance in the night sky due solely to their orientation to one another and the rest of the orbiting planetary hit parade, so too do we get to spend time with certain pinpoint individuals in the swirling stream of life due to an expert storyteller and craftsman like Helmrich.

The excellent production team (which appears to be mostly family, as well) includes Hetty Naaijkens-Retel Helmrich who co-wrote the screenplay with the director; editor, Jasper Naaijkens; sound designer Fahmi Lubish; and a subtle and affecting score by Fahmy Al-Attas and Danang Faturahman.