Fb. In. Tw. Be.
Documentary
On DVD

MARDI GRAS: MADE IN CHINA

(Mardi Gras: Made in China is now available on DVD through David Redmon and partner Ashley Sabin’s Carnivalesque Films. Buy it there or at Amazon

Sociologist turned documentary filmmaker David Redmon’s debut feature is an intelligent, thoughtful and entertaining exploration into the troubling effects of globalization. Redmon uses one seemingly innocuous product—Mardi Gras beads—to show opposite sides of the economic spectrum in China and America (using the word ‘opposite’ is an understatement). This ingenious premise—following an inanimate object from creation to destruction—enables Redmon to expose the free market system at its most cutthroat and inhumane. While this description might make it sound like Mardi Gras: Made in China would be a dry, stuffy experience, Redmon infuses the film with an inquisitive, engaging spirit throughout. It remains clear, every step of the way, that his intention wasn’t to make viewers feel guilty and miserable. It was a far nobler one: to expose the situation for what it is, and to spark a discussion about what might be done to bridge such a cruelly lopsided gap.

Every year at Mardi Gras in New Orleans, carefree drunken revelers toss around Mardi Gras beads like confetti, exchanging them for quick flashes of female breasts. Then, when the party’s over, they throw them away. Meanwhile, over in China, teenagers work in factories around the clock all year long in order to produce enough beads to keep the party going. The going cost of one necklace in America is equivalent to one worker’s salary for three months. That’s right. Clearly, something’s wrong here, but in a capitalist system where the rich get richer and the poor stay poorer, that’s how it goes. But while many people would rather turn a blind eye to the problem (for what can we as individual human beings do to fix it?), Redmon has put his camera where his brain is, trying to work through the dilemma by investigating it more thoroughly for himself and, in turn, us. 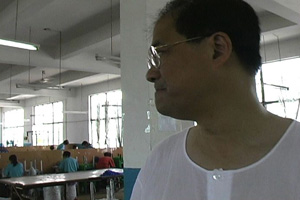 It seems surprising that one of these multi-millionaire factory owners, Roger, would allow Redmon inside his factory’s walls to document the living and working conditions there, but after listening to Roger speak, it becomes clear that he thinks he’s providing a helpful service to his employees. He confidently assures Redmon that his staff is well taken care of, that they love their jobs, and that they are pleased with their salaries. But Redmon introduces us to many of these innocent, teenage female workers, and as they explain their fiscally dire situations, it becomes clear that Roger has got it all wrong. Redmon also interviews an American entrepreneur, Dom Carlone, who purchases and sells the beads, and he too takes a matter-of-fact stance about the disparity, assuring Redmon that if he didn’t do it someone else would. It’s a credit to Redmon that these two figures don’t come off as pure evil, but it’s impossible not to feel antipathy towards them (or, at the very least, with regards to what they stand for).

Throughout the film, Redmon navigates between Mardi Gras footage and life in the factory, but he finally bridges the gap by showing video footage of the bead makers working to many different partiers, who are clearly shocked by what they see. Their reactions vary. Some seem disturbed, some become defensive, but all of them seem to understand that the scales are grossly imbalanced. Again, Redmon isn’t necessarily trying to rain on their parade, he just wants to sober up their blurry, drunken eyes.

Back in China, Redmon shows pictures of Mardi Gras revelry to the dumbfounded teenagers, who are embarrassed and confused by the rampant nudity and senseless bead exchanging. This sparks a more disheartening revelation for these girls, that the beads they earn so little to make sell in America for such an outrageously exorbitant amount. They laugh about it, but they also admit that it seems unfair and wrong.

Mardi Gras: Made in China is socially conscious filmmaking at its most inspired. Redmon may have been a teacher before he was a director, but this film confirms that he’s a supremely engaged storyteller who wants the world to be a better, fairer place.