In the American marketplace, foreign documentaries often go unnoticed. Yet James Marsh’s Man on Wire is that rare critical success that has inspired passionate responses from audiences across the country. This is no surprise, as the film is composed of the elements that we most desire to see in our narrative pictures. Phillipe Petit, the lanky Frenchman who dared to walk a tightrope between the two towers of the World Trade Center on August 7, 1974, makes the perfect rogue hero. With the grin of a trickster and bravery bordering on insanity, Petit has enough strains of villain to keep us at a fascinated distance. The dangerous true crime story, recreated as a black-and-white heist thriller, is evocative of early film noir and yet heavily infused with lighthearted, Chaplinesque antics. And there is romance, in the form of walking in the sky and the spontaneous bedding of a young beauty in joyous, celebratory lust. The old Hollywood recipe and the hybrid noir/silent film-within-a-film conjure a distinct nostalgia, and yet this is only a microcosm of a greater overarching nostalgia that the film evokes, the now instinctive cultural memory associated with looking up. 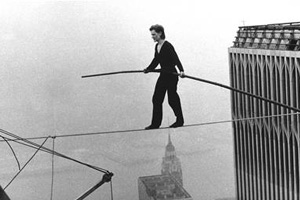 The reenactment of Petit’s high-wire walk between the twin towers tells of the great celebration of humanity that occurred the first time New Yorkers looked up to witness the conquering of the then tallest buildings in the world. That unbelievable feat of human skill and ingenuity sought, like the towers themselves, to fill us with wonder at our own potential; and we still marvel at the concept, thirty-odd years later, when those towers have assumed countless other meanings. The film succeeds in the evocation of pure celebratory joy, but ultimately the profundity and emotional salience of Man on Wire lies in not what is shown, but in what is conjured by the audience’s own memories. Watching the New Yorkers from the ‘70s who looked up in celebration requires a reinterpretation on our part of the ingrained memory of looking up in horror. As we experience the cinematic reenactment of Petit’s daring high wire act, the mixture of their pure joy with our innate grief generates a most unusual catharsis, which is not ironic, but bittersweet.

While it is virtually impossible to view Man on Wire outside of a historical context, it also exists separately as a furiously entertaining biopic of a mad and controversial performance artist. While Petit acts out of a sincere love for his chosen medium and his childlike imagination offers a distinct magic to his performance, his drive is resolutely (and somewhat darkly) masculine. Like the hoards of teenaged daredevils armed with snowboards and handheld video cameras to document their wildness and triumph for YouTube witnesses, Petit too, with a similar degree of innocence, seems to think himself a success object whose existence is authenticated through the accomplishment of yet unperformed feats. To conquer the towers would be to overcome the successes of other men, and it is this quality of competitive, obsessive drive—both admirable and vile—that defines Petit. And it is his character in light, dark and shadow, his uncertain mores, the attractive and innocent, yet questionable, character, that makes him undeniably human and fully captivating.

(Man on Wire was just released on DVD by Magnolia Pictures. Buy it at Amazon

, and visit the film’s official website for more information.)