Documentary
In Theatres
On Television
On the Festival Circuit

One of the most powerful aspects of film is that we can experience the passage of years over the course of 90 minutes. Obviously, if that passage of time is conveyed through a shot of calendar pages flipping by we are going to be less moved than if we see the character actually age in front of us. In a Dream is a documentary made by Jeremiah Zagar about his family and its aging hippie patriarch, mosaic artist Isaiah Zagar. Over the course of the film’s 80 minutes, we move through multiple decades and several stages of life within this fascinating artistic family. Jeremiah is the family’s youngest member and his camera is always present as the drama unfolds across the years. Because the family decided to cooperate and fully open themselves up, we are treated to an amazingly intimate portrait of a unique family struggling to make sense of life’s cruel twists.

We’ve come a very long way from the naive attitudes toward media that created the dysfunctional suburban family doc An American Family. In that seminal PBS series from 1973, we watched a family unravel through the experiences and perspectives of the individual family members. In one scene, the father, drunk, explained to a friend at a cocktail lounge that “the American man has been sold a bad bill of goods, who says the man needs to pay the bills and be home all the time…?” He goes on to explain how his friend Jacques is able to run around and it doesn’t seem to bother his family. It was in those scenes, when the subjects seemed to forget the camera was rolling, that gave us their most insightful declarations. Much of the other truths came through the strange collision of self-conscious performance and naive self-revelation. I seriously doubt there is another family in America today that would be so naive as to allow a camera crew to live in their house and film whatever they want. What we get now are the pathetic attempts at recreating that An American Family ‘truth’ through MTV’s The Real World format where dramatic encounters are staged by the crew and the subjects willfully perform at being ‘honest’ or are prodded into being ‘real’ in a follow up direct address ‘interview.’ It wouldn’t really be worth discussing this TV trend, except that the form has seeped into many festival level feature-length docs. I don’t care how powerful your subject or your theme is, if you haven’t got a basic grasp of the stylistic history of your medium you are going to make, at best, a mediocre film. For this reason, most verite docs suffer not from an uninteresting subject but from a flawed stylistic premise. 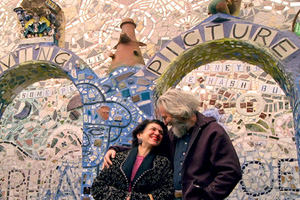 In a Dream teeters on the cusp of falling into the ‘faux verite’ vortex but is rescued by the subject’s bold, fearless commitment to truth. The subjects here are the ’60s-era artist Isaiah, his artist wife, and their two sons. The whole family has fully accepted the concept that art is about the pursuit of truth and that an artistic life is one where that truth can be found through honesty, both with yourself and your loved ones. Consequently, all of the family members open their lives and hearts to the youngest son, Jeremiah. Lucky for us, Jeremiah is a real filmmaker and interviewer. He knows when to not let a comment go unquestioned, he knows when to prod and when to just keep quiet. Isaiah and his wife are both willing subjects, but when the drama gets intense and the family starts to break apart, it is tough for Isaiah to face himself, let alone his son and a camera!

The fact that the whole family consented to this intimate portrait is a testimony to their bond as a family and their dedication to art as truth. The result is a documentary that is rare in the way that it leads us deep into the emotions and turmoil of a family over the course of several years. Their journey stands as an example of how it is possible for a family to exist and grow together, across many years and problems. Isn’t it strange that this offbeat ‘freaky’ hippie family turns out in the end to fully embody the conservative family-value ideal? Unlike An American Family, this is a family story that has a genuinely happy ending.

A Conversation with Jeremiah Zagar (WE THE ANIMALS)