(Ashes of American Flags: Wilco Live is now available on DVD through Nonesuch. You can also buy it at Amazon

Does the world need another Wilco documentary? If you’re talking about Brendan Canty and Christoph Green’s Ashes of American Flags: Wilco Live, the more appropriate question is: do we really need that other one? Not only is this one of the more gorgeously produced concert films of recent memory, it is also an irrefutable testament to Jeff Tweedy’s songwriting talent and the exceptional musicianship of his band’s current lineup. More importantly—and perhaps unexpectedly—Ashes of American Flags is a quiet lament for a 20th century America that is rapidly fading into the past.

In that ‘other’ Wilco doc, I Am Trying to Break Your Heart

, Sam Jones documented a more contained and tumultuous period in the Chicago-based band’s history. Not only were they dropped from their record label (Warner affiliate Reprise) while recording their acclaimed Yankee Hotel Foxtrot album; on an interpersonal scale, a growing friction between front man Jeff Tweedy and guitarist Jay Bennett led to Bennett’s firing. I Am Trying to Break Your Heart was shot in stark black-and-white, an apt choice for a film that presented the more somber aspects to being a professional rock-and-roller. Ashes of American Flags, on the other hand, is a much different and more expansive affair, and not just because it was shot in color. 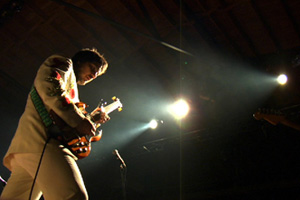 What immediately stands out is how good Canty and Green’s film looks and sounds. Coming from someone who is highly skeptical of a camera’s ability to transfer the true energy and spirit of a rock concert to a two-dimensional screen—not to mention a fan who thought he’d lost the urge to ever see Wilco play live again—the immediacy and physicality of this experience provided a pleasant jolt to the system. In addition to employing enough cameras to cover the performances from seemingly every vantage point, Canty and Green also recorded and mixed the audio at the highest quality possible. The only thing missing here is the irritating feeling of standing awkwardly, sardined between drunk sing-a-longers in a smoldering club, wishing this event was happening in a seated venue. But that’s the beautiful thing. This time, it actually is!

As a way to further connect Wilco to their musical roots, the filmmakers didn’t just set their cameras up in one venue and press record. Instead, they traveled with the band as they drove across the country to play in some of America’s most formidable institutions: Cain’s Ballroom (Tulsa), Tipitina’s (New Orleans), The Mobile Civic Center (Mobile), the Ryman Auditorium (Nashville), and the 9:30 Club (Washington, DC). In their off-stage downtime, the band members reflect upon the changes they’ve seen to the country in their 20ish years of playing music. Bassist and only other original member John Stirratt speaks poignantly of how his own hometown saw its dissolution when the first Wal-Mart arrived. Canty and Green break up the potential concert footage monotony by incorporating imagery of slowly rolling highways, sunsets, clouds, and bridges set to sleepy Wilco instrumentals. This enhances the air of dreamy, sorrowful nostalgia.

There is a traditional familiarity that grounds Tweedy’s songs—a melodic amalgamation of the distinctly American genres of pop, rock, and country—even as he and his band members at times appear to be trying to make them sonically self-destruct. While the whole band is gifted, drummer Glenn Kotche and guitarist Nels Cline are outright virtuosos. Watching them perform and listening to them speak about their craft, it’s evident that this is much, much more than just a hobby or a job. It’s coursing through their bloodstream. Tweedy himself is a devoted music historian who eloquently defends his decision to play this particular brand of music at this moment in time. Though the world may be changing, his chosen form of representational art isn’t outdated. To Tweedy, it’s as relevant as ever. Watching the band perform, it certainly feels that way.

. Still, I couldn’t help but make the comparison to that film and The Band every time Canty and Green’s camera zoomed out to capture all six members in one wide frame, pounding away individually on their own respective instruments while remaining locked into one tightly wound zone. At the very least, it has given me a new re-appreciation for Wilco. At the very most, it will likely bring many more appreciators into the fold.