DAMSELS IN DISTRESS
The Wit of Whit

(Damsels in Distress is being distributed by Sony Classics. It opens theatrically in NYC and LA on Friday, April 6, 2012. Visit the film’s official website to watch the trailer and learn more.)

My first experience watching a Whit Stillman movie came during my senior year of college. My good friend Matt Hoffman (now Dr. Matt Hoffman) and I rented Barcelona on a whim from Vis-art Video in Chapel Hill (sadly, it’s no longer there, and I’m talking about the store here, not the copy of Barcelona, though the store not being there means that the copy of Barcelona’s not there either which is even sadder, I think?). It’s important to note that my friend was/is much smarter than myself. I think he scored something like 1450 on the SAT. I scored 1000 (600 Math, 400 Verbal), but in my defense I only took the SAT once and was raised by Turkish-speaking immigrants who, at the time of my upbringing, didn’t speak English all that well, which I’ve always felt justified my embarrassingly low score on the verbal section. Barcelona is a smart movie, and while most of it went right over my head, my (smart) friend “got it,” especially the seemingly erudite references, all of which were lost on me. Still, I found myself laughing throughout. There was something about the characters that charmed the hell out of me. They were somewhat “assholish,” yet totally engaging and sweet—especially Chris Eigeman’s character, who seemed intelligent enough to say things in an interesting way but who was also kind of an idiot yet not so idiotic that he was unaware of his idiocy. I identified with this in a profound way. Was it possible to be a complete dufus, yet still have what seemed like semi-intelligent conversations?

I’m reminded of the question Fred (Eigeman) asks his cousin Ted (Taylor Nichols) in Barcelona, which went something like: “What do they call the words that lie above the subtext?” Ted replies, “The text.” And this in a nutshell summarizes why I adore Whit Stillman. I think the man’s a genius. His movies are relentless celebrations of dialogue and wit. You have to pay attention to every syllable or else you’ll miss a joke. Whit Stillman could make another 20 movies (I hope he does) and never again put his name on a single credit, yet you’d know the films were his. The characters in his movies speak like no one else. They think like no one else. I’m happy when I’m in his world. These days I’m rarely surprised by the comedies I see. Scripts feel watered-down. Dialogue seems hackneyed. But in a Stillman movie, the characters embrace language in thrilling way. Words don’t just roll off the tongues of his characters; they dance. 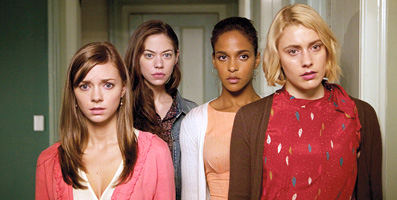 I’ve waited 13 years for Stillman’s follow-up to The Last Days of Disco and now it’s arrived: Damsels in Distress. Is it enough to say that I loved it? I hope so, because I did. I sat in the theater and swallowed every brilliantly constructed sentence and absurd subplot like a little boy at the circus—though I never went to the circus as a little boy. My parents weren’t horrible, they just never took me to the circus, and spoke broken-English around the house, which again I must mention may have contributed to my embarrassing SAT score.

The cast of Damsels is great, handling Stillman’s witty dialogue with pitch perfect dryness. Okay, maybe this contradicts what I’d mentioned earlier about how Whit’s words “dance” off the tongues of his actors. One’s words can’t really dance and have dryness, I suppose. It seems contradictory. But then again, maybe it doesn’t? Still, man, wit is in abundance here and the actors execute it to perfection, especially Greta Gerwig and Adam Brody, who I hope become regulars in Stillman’s subsequent movies.

By the end of Damsels and the final dance number, I had tears of joy streaming down my face. Whit Stillman had done it again. I wasn’t quite sure what he had done but he’d done it all the same. Like Barcelona, most of it went over my head. Some of the seemingly central themes confused me. Could a new dance sensation really change the world? Is there really an ideal “scent” that could cure melancholia? Why are the French so hell-bent on sodomizing our American women? Though I shouldn’t say “our” American women because I’m Turkish. But I don’t speak Turkish and I am indeed American so it’s probably acceptable to say “our” American women. Though now that I think about it, there’s something weirdly misogynistic about using “our” when referring to women in any capacity. Still, why are the French trying to sodomize them? I don’t know. Whit Stillman continues to confound me. But he still makes me laugh. Besides, it was never the “subtext” in his movies that interested me. It was the “text.” And the text is very much alive in Damsels in Distress. Welcome back, Mr. Stillman!