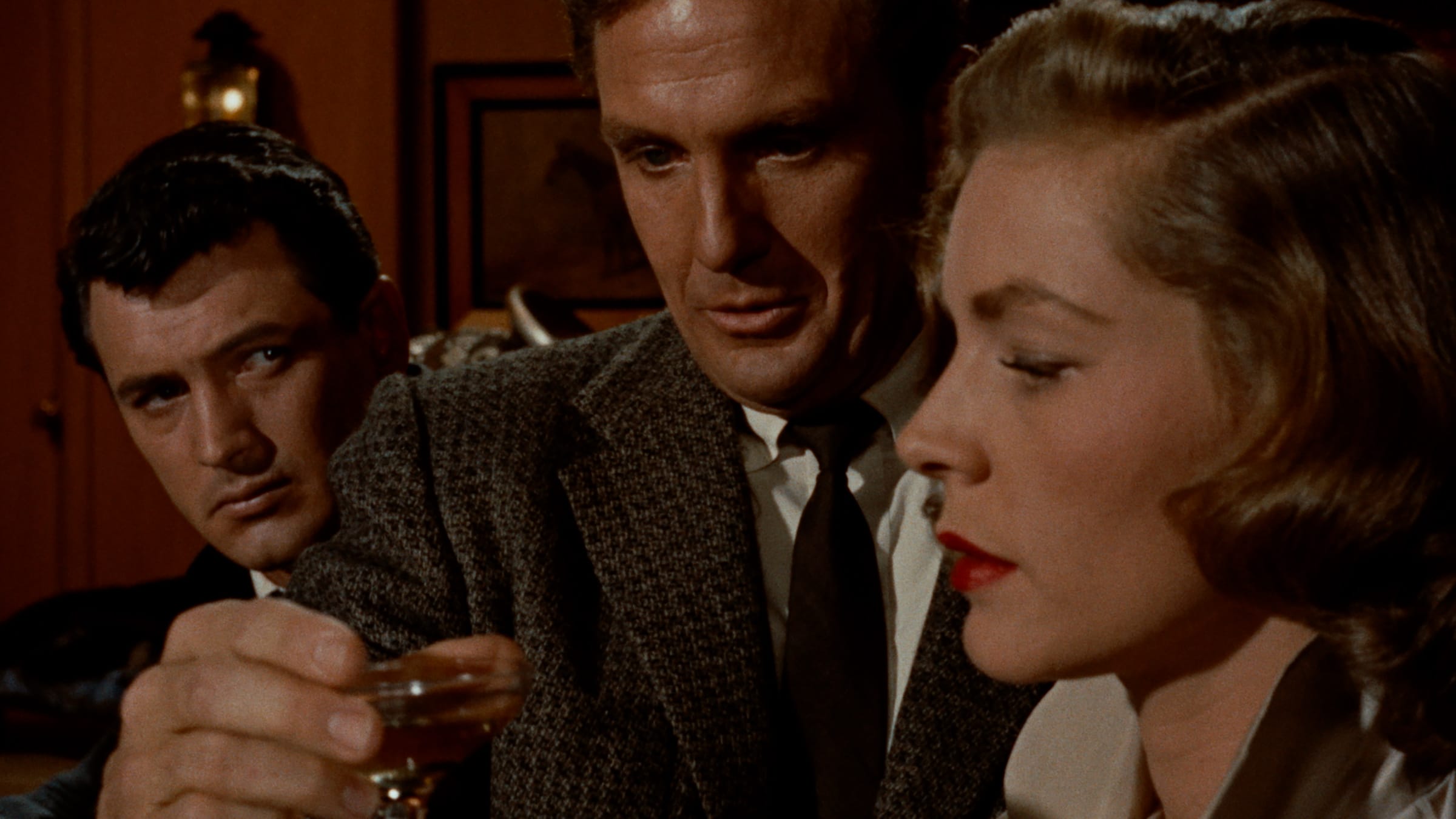 (Here at Hammer to Nail, we are all about true independent cinema. But we also have to tip our hat to the great films of yesteryear that continue to inspire filmmakers and cinephiles alike. This week, Jonathan Marlow invites the brilliant filmmaker/critic Mark Rappaport to dig in on the Criterion 4k Blu Ray of Douglas Sirk’s Witten on the Wind.)

A collaboration from afar: considering that there exists no one better to discuss the works of Douglas Sirk than the erudite and illustrious Mark Rappaport—and thus presenting an opportunity for me to directly reference the recent availability of the latter’s work via Kino Lorber, particularly his exceptionally-apt-in-this-regard Rock Hudson’s Home Movies and essentially everything else, including his extraordinary recent short films as “extras” on the home video releases of his justifiably celebrated feature-lengths and their subsequent debut on Kino Now—what follows is a hybrid assessment of the inarguably opulent Written on the Wind, a film that likely could not nor certainly would not be made in the same way if it were filmed today (not that anyone would be likely to surpass the exquisite casting nor Russell Metty’s lush cinematography). If you happened to find yourself in Palermo in recent weeks, Mark Rappaport was the ideal Guest of Honor at the Sicilia Queer Film Festival where there were five programs of his remarkable work (followed by subsequent presentations of earlier and recent films in Trieste and Milan, making an optimal occasion to see his wonderful work throughout the grand Italian countryside).

[At Rappaport’s most agreeable request, I have selected and interspersed a handful of related comments by the legendary Rainer Werner Fassbinder as well, thus closing the loop on a kaleidoscopic trio of contributors across time-and-location, shuffled as a deck of cards.]

WRITTEN ON THE WINDOWS [Rappaport]

I’ve probably seen Written on the Wind five-hundred times. I would easily win a Karaoke contest if you had to repeat the dialogue with the actors on the screen. Something happened at the five-hundred-and-first time: it suddenly struck me that in the haunted house where all of the principal characters live or pass-through—they are the ones who haunt the house—everyone is looking out the windows, probably to see what new horror has arrived or is arriving. The main characters, Mitch Wayne (Rock Hudson), Lucy Hadley, née Moore (Lauren Bacall), Kyle Hadley (Robert Stack) and his sister, Marylee Hadley (a sublime Dorothy Malone) are all the occupants of the mansion and between the four of them, plus the Hadley father (Robert Keith), commit—or would like to commit—all of the seven deadly sins plus a couple of others that didn’t make the cut. Drunkenness, raging promiscuity, hints of possible incest, rapacious greed, undeclared lust (or maybe it is love), murder, infanticide—all within the walls of a well-appointed huge mansion of a beautifully designed set. Everyone seems to rush to their windows at the drop of a hat to see what new hell has arrived and is to be visited on them. Or maybe they’re at the windows hoping to escape, surveying the landscape to see if there is a way out.

The windows are probably not part of the set and were likely added afterwards. They seem cheap and, for the most part, look like a couple of boards nailed together to give an “impression” of a window. First we see Mitch (with the name of the actor, Rock Hudson, printed on the shot) looking at Kyle, drunk and ready for murder, coming to the house to kill him. We see the servants, also at their windows, looking up from their cramped basement apartment, knowing that their employers are up to no good. They never are.

Marylee, too, comes to the window, dying to see what will happen next. What happens next is that the leaves conspire (with the sappy song on the soundtrack) to swirl and fill up the elaborately-appointed foyer, a wonderful image that that makes visual the title of the movie. Lucy, fresh from a miscarriage (as we will learn later), also makes an appearance at a shabbily constructed window. But all this is a prelude. This is the flash-forward. It will be repeated at the end of the film.

SMITTEN BY THE WIND [Marlow]

Written on the Wind has everything one could ask of melodrama. Everything a slightly more. The lark is that Written… falls in the midst of Magnificent Obsession (1954), All the Heaven Allows (1955), There’s Always Tomorrow (1956) and The Tarnished Angels (1957). Not uninterrupted (as there were other films with other themes in-between). Five films, all-but-one with Rock Hudson, each dealing with the despair of then-contemporary American life. Leave it to a German ex-pat to understand the assorted foibles of the U.S. better than essentially any of the other filmmakers in Hollywood (with the evident exception of those indulging in noir and, thereafter, the neo-Western).

When we first see Hudson, Bacall is in bed behind him. They’re the top-billed actors and, when the flash-forward ends and time folds back to the proper beginning of the tale, they “meet cute” at the office promptly thereafter. When Hudson asks where the last secretary went, she replies, “My predecessor? She was paroled.” Bacall is due to become imprisoned as well. Her character just doesn’t quite know it yet.

The audience is set-up to expect that this is their story, Bacall and Hudson paired-up. In a sense, that expectation isn’t incorrect: it is their story. The bookends of their meeting and the inevitable conclusion, telegraphed in the foreshadowing. They’ll go through a tumultuous year unlike any you’re likely to imagine (unless you’ve ever seen a Sirk film before).

As Fassbinder opined, “not one of us, [Jean-Luc] Godard or [Samuel] Fuller or me or anybody else, can touch Douglas Sirk.” As usual, he is correct. 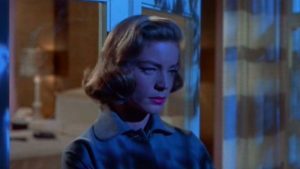 Lauren Bacall in “Written on the Wind”

WRITTEN ON THE WINDOWS [Rappaport]

More windows. When Marylee is brought home by a police escort for vagrancy. Actually, she’s not the one that is being blamed. She, after all, is the one with the money. It’s the guy who she propositioned and picked-up, Grant Williams (a perfect Douglas Sirk name for this movie), a gas jockey. He will achieve immortality the following year as The Incredible Shrinking Man. One thinks of him as short—he is always shrinking, right?—but he was 6’1”.

After Father Hadley’s death, partially caused by Marylee’s indecent (and flamboyantly glorious) mambo for one, Lucy looks out the window, perhaps wondering what’s in store for the remaining Hadleys.

When Wayne gives Lucy a lift to the city, Marylee and Kyle watch and Marylee pours poisonous gossip into Kyle’s ear, suggesting his wife and his best friend are deceiving him. He is all too willing to listen.

SMITTEN BY THE WIND [Marlow]

Fassbinder, again: “Take a film like Sirk’s Written on the Wind: what passes on the screen isn’t something that I can directly identify with from my own life because it is so pure, so unreal. And yet within me, together with my own reality, it becomes a new reality. The only actuality that matters is in the head of the viewer.”

Everything within Written on the Wind is doubled. If the frame is a window, it is also a mirror. The film persistently reflects itself from each earlier scene to another further along (with the possible exception of the aforementioned hedonistic dance to the aptly-titled “Temptation” which arguably is the centerpiece around which this hall of mirrors revolves). The courtroom drama of its closing-third is the courtship of the opening-fifth. One court to another.

Once more, Fassbinder-wise: “Sirk has said you cannot make films about things. You can only make films with things, with people, with light, with flowers, with mirrors, with blood, in fact with all the fantastic things which make life worth living. […] The spectator’s intense feeling is not a result of identification, but of montage and music. This is why we come out of these movies feeling somewhat dissatisfied. What we have seen is something of other people. And if there’s anything there which concerns you personally, you are at liberty to acknowledge it or to take its meaning with a laugh.”

Plot is an arrangement of events happening to other people. Sirk makes films as a composer writes music: all of these assorted details will make you feel something if you allow those details to do their work on you. In this instance, a roundelay (like these very words you’re presently reading). Perhaps you will feel the intend emotion or perhaps you’ll feel something quite different. In any event, you feel. You will experience feeling. You will not be immune to feeling unless your interior is a cold, dead void. 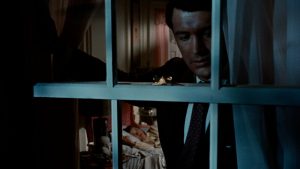 Rock Hudson in “Written on the Wind”

WRITTEN ON THE WINDOWS [Mark Rappaport]

The opening scenes are repeated. Kyle, drunk, drives up to the house. He goes to the library to find the family gun. Wayne, followed by Marylee, follows him. Marylee tries to wrestle the gun away from him with which he threatens to kill Wayne. Kyle accidentally shoots himself. Or does Marylee shoot him?

Marylee watches, through lace curtains and overgrown plants, as Kyle and Lucy leave the house for good. She is now alone, sole heiress to and in charge of the gigantic Hadley empire. She is dressed in a gray business suit, a far cry from the revealing gowns she was so fond of. She has only the gold-plated model of the Hadley oil well—a phallic symbol if there ever was—as a friend to console her and to confess to. On the wall behind her hangs an enormous picture of her father, caressing the same model oil well (although seemingly much happier doing it). The two of them—Marylee and her father, whose death she caused—will have much to talk about in the years to come.

Kyle and Lucy drive off. It is most unlikely that they will come to visit Marylee, Lucy’s former sister-in-law. She can watch and wait but they’ll never come back.