(We here at Hammer to Nail are all about true independent cinema. But we also have to tip our hat to the great films of yesteryear that continue to inspire filmmakers and cinephiles alike. This week, our “The Curbside Criterion” continues where HtN staff can trot out thoughts on the finest films ever made. Today Christopher Llewellyn Reed takes an in-depth look at the new Blu-Ray release of Clouds of Sils Maria the 2014 Oliver Assayas film that takes a look at the collision of art and commerce, life and death.)

French filmmaker Olivier Assayas began his professional life as a writer – of both screenplays and reviews – before making his feature directorial debut in 1986, with Disorder, after two noteworthy script collaborations with director André Téchiné, on Rendez-vous (1985) and Scene of the Crime (1986). In the 30 years since, Assayas has carved out an impressive international career with films like Irma Vep, Clean, Demonlover, Summer Hours, the three-part miniseries Carlos, and then, in 2014, Clouds of Sils Maria. A beautifully meandering meditation on time, memory, the relationship of both to the aging process, and the intersection of art and life, Clouds of Sils Maria continues Assayas’ long-standing tradition of creating strong and complicated female protagonists. Given the Gallic tendency to leave the answers to central dramatic questions up to the audience, the film is not for everyone, but it rewards the efforts of those viewers willing to submit to its metaphysical charms (for more on my thoughts on the film, itself, check out my original review).

Speaking of interesting women, one of the great joys of this movie – beyond its gorgeous setting and cinematography – is that we we are treated to two fine performances from the lead actress, Juliette Binoche (The English Patient) and Kristen Stewart (Twilight), each, in her own way, a symbol of her particular generation. Given Stewart’s sometimes-rocky relationship to contemporary celebrity culture, it is fascinating to watch her play the personal assistant to a middle-aged star, functioning as her employer’s protectress from the real world. Throw a young starlet, played by Chloë Grace Moretz (Let Me In), into the mix, and the layers of art imitating life imitating art pile the atop the other to heights almost as dizzying as the mountains of Sils Maria, themselves.

Speaking of those mountains, and the swirling clouds that surround them, perhaps the greatest character in the film is nature, itself. What is essentially a dialogue-driven film where the two main characters argue about life and art, and the meaning of both, Clouds of Sils Maria is transformed into a sumptuous visual feast thanks to its almost unbearably stunning setting in the Swiss Alps. Though what passes for the plot revolves around the production of a play, thanks to the beauty of the landscape Assayas crafts a tale that is cinematic to its very core. 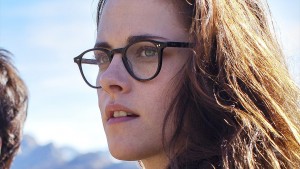 And now, thanks to the Criterion Collection’s new Blu-ray release of the film, that beauty is available to one and all, at home. The 2K digital transfer, with a 5.1 surround-sound DTS-HD mix, is flawless. If your television is properly calibrated and your screening room is dark, you will feel as if you are on the hikes with Binoche and Stewart. This is truly a case where – if you like the film – it is worth paying for the disc, just to enjoy the sumptuous vistas in their full splendor.

Beyond the movie, the package comes with four supplements: an essay by noted author and film critic Molly Haskell; a 37-minute interview with director Assayas; and also-37-minute combination of two separate interviews with stars Binoche and Stewart, edited to feel like a conversation between the two; and the 1924 silent documentary Cloud Phenomena of Maloja, by Arnold Fanck, that is featured, through select clips, in the film, itself. All add depth to our appreciation of the main feature. Here are my brief thoughts on each.

Haskell does a fine job summarizing the plot of the movie (though with a few plot spoilers) before pointing to its place in the overall film canon, comparing it to such previous cinematic masterpieces as Billy Wilder’s Sunset Boulevard, Joseph L. Mankiewicz’s All About Eve, Ingmar Bergman’s Persona and Rainer Werner Fassbinder’s The Bitter Tears of Petra von Kant, as well as Michelangelo Antonioni’s L’avventura (in terms of its unresolved ending). She also provides the context of the previous working relationship of Assayas and Binoche, reminding us how Rendez-vous served as the latter’s breakout role, and how Summer Hours marked the first time they worked together as director and star. Finally, she leaves us with one last comparison, to Noah Baumbach’s recent While We’re Young – a film that also deals with the challenges of letting go of youth – pointing out how, in today’s world, people in their 40s often feel older than people in their 80s, because they’re still trying to stay in the game. Overall, it’s a strong essay by a writer still very much in the game, herself, though approaching 80.

Beyond Time, an interview with director Olivier Assayas

Both sets of interviews on the disc reinforce much of what Haskell has written. Assayas – an extremely articulate (in English, no less) critic of his own work – also starts with how he first encountered Binoche, and then reveals how, after Summer Hours, he wanted to work with Binoche again, and wrote Clouds of Sils Maria explicitly for her. I particularly enjoyed his discussion of how he views the play-within-the-movie, Maloja Snake, as a sped-up rougher version of Fassbinder’s The Bitter Tears of Petra von Kant; it’s his way of paying homage to one of his favorite filmmakers. Assayas also spends a good deal of time on the actual pre-production and production of the movie, which should delight the filmmakers and technical folks watching.

Juliette Binoche and Kristen Stewart both come across as as exceptionally smart about their craft and how they worked together on the film. Stewart, especially, is quite insightful on how the realities of her own life helped her prepare for her role as a personal assistant. I really enjoyed listening to each one discuss her particular costume and hair choices – why does Binoche’s character cut her hair halfway through, and why does Stewart’s character look the same, throughout – as well as how each one sees herself (or not) in her on-screen persona. They have a lot to say, all of it interesting.

Finally, there is what remains of the original 14-minute 1924 documentary by Dr. Arnold Fanck – he who popularized the German “mountain films” of the 1920s, including The Holy Mountain (1926), which helped launch Leni Riefenstahl’s acting career – clips from which are scattered throughout Assayas’ film. Whatever else Fanck eventually became (like Riefenstahl, he turned his filmmaking services over to the Nazis in the 1930s), he was a brilliant chronicler of rugged landscapes, and his footage of the billowing Alpine cloud formations has lost none of its grand beauty since its initial capture. Sadly, the original cut of the film was lost, and so we only have 9 minutes here, but it is still stunning. On this disc, the movie is accompanied by trumpeter Paolo Fresu, using a performance recorded at the Festival Della Montagna in 2010.

My takeaway, then, is a big thumbs up for disc quality and content provided.