(Crimes Against Humanity screens at Slamdance 2014 on January 18th and the 22nd. Visit the film’s official website to learn more.)

Brownie (Lyra Hill) is depressed, unemployed, always on the verge of tears. Lewis (Mike Lopez), her boyfriend, is cocky and condescending. In Crimes Against Humanity director Jerzy Rose—who co-wrote with Halle Butler—skewers the subtle cruelties and pent up rage of a classic dysfunctional relationship, showing a unique talent for dry comedy.

In the opening scene, Lewis drops repeated, unsubtle hints to Brownie that she needs to get up, get out of the house, and get a job. “Focus, apply yourself,” he says, his inflection dripping with fake concern, “because I think you’d be so much happier if you had something to do all day.” This leads to a fantastic stare-off, Brownie’s eyes full of hurt and resentment and Lewis drilling an impassive look right back at her, utterly unmoved. Brownie needs love and affection, but she’s an emotional black hole. Lewis is inured to her helpless little girl routine, and he’s got more important concerns: his self-image is all pumped up by his role in a dubious investigation into sexual misconduct at the University of Chicago, where he’s a dean’s assistant. 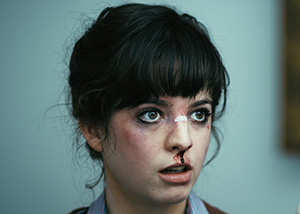 What starts out as a note of theatricality grows into a strong undercurrent of the surreal; the film has a bright, cartoonish surface wrapped around deliciously dark satire; it finds the sweet spot between naturalism and bedroom farce. The atmosphere of paranoia and competing egos in the halls of academia is nicely conveyed, as absurd evidence is gathered in Lewis’ investigation. Meanwhile the ethnomusicology professor who’s under suspicion leaves a mixture of dirt and crushed berries on a car door handle. Lewis gets the goo on his hand, and bad things start to happen.

Rose and Butler have an organic, elastic approach to story: their main characters seem to unknowingly draw people and situations to themselves because of the state of mind they’re projecting. Brownie’s self-pity leads to a series of calamities, including being hit by lightning. Even a visit from the spirit dimension ends up being harsh: after Brownie spills her sorrows to a floating Earth Mother, she’s told that it’s not a big deal, that she shouldn’t be so selfish.

Hill and Lopez, neither of whom are actors, bring their characters to life with plenty of raw, layered emotion as well as a sense of play, like little kids trying to handle adult situations. Lopez is particularly funny in a series of scenes where he gets called out for lying and keeps digging himself in deeper. Ted Tremper kills it as Rory, the “nice guy” that meets Brownie at the veterinarian’s office and quickly starts a romance with her. In a hilariously dark and uncomfortable scene, he visits Brownie in the hospital after she’s hit by a car and tells her “I don’t think it would be a bad idea for us to keep things a little bit… open.” Adebukola Bodunrin creates a sparkling, otherworldly character as giggly, manic, not-all-there Frenchie, the secretary who maneuvers past Lewis’ lies to take away his cell phone, ends up in bed with him, and falls into a well chasing fairies.

The film’s dark worldview and sense of humor is nicely encapsulated in its epilogue. Brownie shows up at a job interview; her face is battered from her accidents and she’s having a nosebleed. She tells a concerned and somewhat frightened-looking prospective employer that “I guess I just feel this intense, burning desire to re-shape the world around me for the better.”