(Convento world premiered at the 2011 SXSW Film Festival. It is being distributed by Factory 25 and opens for a one-week theatrical run on Friday, March 9, 2012, at the reRun Gastropub in NYC. It had its New York City premiere on Saturday, July 16, 2011, as part of Rooftop Films. Visit the film’s official Tumblr page to learn more. NOTE: This review was first published on July 14, 2011, as a “Hammer to Nail Pick of the Week” at the Filmmaker Magazine blog.)

Built to house an abbot and 12 monks 400 years ago, the Portuguese monastery Sao Francisco had deteriorated into an unlivable state. But when the Zwanikken family relocated from Holland in 1980 to restore the beautiful but troubled structure, their hard work and dedication turned that once religious house into a happy home. Though their husband and father Kees is no longer with them, the surviving family members—dancer/artist/mother Geraldine, artist/son Christiaan, horse trainer/son Louis—continue to subsist on this mystical land, gardening, tending to animals, and making art. In describing his ever-deepening connection to Sao Francisco, Christian says, “You can use your imagination here.” While that’s certainly true, it’s unlikely that any other family would use it as expressively and life-affirmingly well as the Zwanikkens do.

Jarred Alterman’s Convento is a multi-fold achievement. It’s an inspiring tribute to a well-adjusted family, it’s a reverent document of a very special place, and it’s perhaps most distinguishable as a stunning showcase for Christiaan Zwanikken’s artwork. As described in the film’s press notes, Christiaan is a “kinetic artist who reanimates skeletal parts and deceased wildlife with servomotors and robotics.” These creatures would be awesome (and by ‘awesome’ I mean the original definition of that term) in any environment, yet here, they become something altogether more indelible. They’re like wandering, leftover figures from some extinct futuristic planet. That said, it isn’t just the artwork itself that brings Convento to such rich life. In the way that Christiaan thrillingly fuses the natural world with mechanics in his work, director/cinematographer/editor Alterman delivers a similarly perfect marriage of form and content. 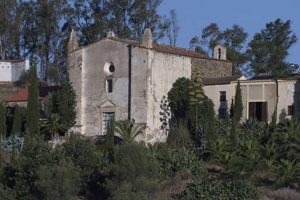 Just about anyone can become an accomplished technical filmmaker. Clearly, Alterman knows how to photograph and edit, and his collaboration with musician Lawrence Dolan cannot be understated—it’s an excellent sonic expression of the element of sci-fi naturalism that defines Christiaan’s work. But there is something deeper going on here. I have no idea how much time Alterman spent at Sao Francisco or how well he knew the Zwanikkens before pressing the record button, but with every static camera placement, every slow dolly, every edit, it feels as if he was connecting to his material on a more instinctive, spiritual level. Whatever energy is in the air or water that makes Sao Francisco such a special place, Alterman managed to bottle that into this 54-minute film.

Speaking of 54 minutes, Convento is one of those rare works you encounter in which you wish it would have gone on for a whole lot longer. That’s for every reason: to hear Geraldine speak some more about the pleasures of gardening and cooking, to hear Louis shyly speak of his fondness and love for his horse Doenja, to witness Christiaan assembling new creatures piece by piece, to appreciate those creations more fully, to simply bask in the beauty that is Sao Francisco. But in a broader sense, it’s a testament to Alterman’s gracious, patient filmmaking that we don’t want the credits to roll. The Zwanikkens are living a life that so many of us desperately crave, one filled with art, filled with time, filled with love. Convento is a lovely reminder of the things that really matter.