(Unmade Beds is distributed by IFC Films and is now available on DVD. It opened theatrically at the IFC Center on Wednesday, September 2, 2009. Visit director Alexis Dos Santos’ MySpace page to learn more.)

Expanding on the clear promise of his 2006 debut feature Glue, Argentine Alexis Dos Santos cements his place as one cinema’s most intriguing new autuers with Unmade Beds, a startlingly energetic film whose HD visual elegance and studied grammatical anarchy give its old hat tale of youthful ennui amongst London hipsters a new life.

Working in an autobiographical vein is something few narrative filmmakers own up to and even fewer are able to do successfully. Dos Santos, who spent much time in London during his formative years as a filmmaker, gives us a pair of protagonists, including a scruffy-headed young man of Spanish origins who seeks a father he’s never truly known while squatting in a giant Artist space. Wonder where he got that idea from? Both characters seem to rest comfortably in the realm of author surrogates. The experiences of the two squatters, who often float past each other, unawares of their common longings (or address), represent with eloquence and never a drop of sentimentality the trials of being young and lost in a big, foreign city.

Although they don’t meet until the final reel, both dressed in animal costumes after a music video shoot turns into a loft party, the Spaniard Axel and the Frenchwoman Vera share a loft with probably a half dozen others. She works at a bookstore, but spends the days in distraction and reverie, thinking about a broken love left in Paris and the fleeting nature of mutual interconnection. He plays at looking for an apartment under an assumed name, if only to spy on the realtor, who he’s deduced is the father who left him twenty years before. 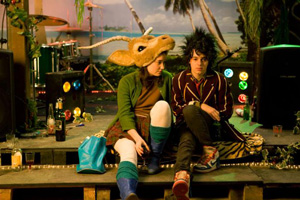 A narrative thread that in lesser hands may have been played for melodrama is given a little weight but a large dose of comedic playfulness. It keeps the forward progress of the story tethered to some tension and some desire to find out, in the David Mamet sense of the phrase, “what happens next”, but still allows the film heady leaps into lateral stylistics. Dos Santos ultimately pays off the thread with panache, honestly displaying the way a young man bathed in a world of zero authenticity would actually respond to the dismaying revelation that his father is an average man in an average time who never thought to say goodbye not out of malice, but out of simple respect for the meaninglessness no one can seem to escape from these days.

Memory is a strong factor in this film. Axel ends every night drunk, often finding himself in the bed of a woman (or man, or both), the circumstances under which these events occurred escaping him the next morning. Vera can’t seem to escape her own, so much so that she threatens the prospect of a new relationship with a Londoner whose name she can never seem to remember. If this is all seeming a bit Gondry, it is.

Yet the film’s delicate formal touches, which include still sequences as flashbacks, the use of disruptive sound flourishes and saturated Super 8mm as an indicator of intensified experience, first person narration (in Spanish or French depending on the thinker, who may also slip into omniscience at the storyteller’s playful discretion), recalls not just the French New Wave, but more recent work by filmmakers as varied as Lynne Ramsay and Arnaud Desplechin, Andrea Arnold and Olivier Assayas, but without the sometimes overwhelming—although never less than beautiful—melancholy you find in three of those four filmmakers work (I’ll let you guess which one I’d exclude). Claire Denis might deserve a shout out too (although if you talk to the Rotterdam press staff, I hear she does plenty of shouting on her own), but what makes Dos Santos stand out is just how much he makes these techniques his own and the milieu he shows us, which can seem so stale in lesser hands, but seems fresh and alive in his.