(Wholphin No. 11 is distributed by McSweeney’s and can be purchased at Amazon

, though what you really need to do is go to the Wholphin website and purchase a subscription. )

Everybody knows by now that Wholphin, the quarterly DVD magazine devoted to the art and craft of the short film, brings da muddafuggin’ ruckus with each and every issue. However, even taking that into account, Wholphin No. 11 is an especially loaded treat. As editors, Brent Hoff and Emily Doe are committed to curating a lineup of short work that spans the globe—this time, that includes the USA, the UK, Russia, Germany (by way of the India/Pakistan border), Australia, New Zealand, and… Antarctica? When it comes to genres, tones, and styles, Hoff and Doe are into spanning as well. They also take packaging and presentation very seriously. To this end, every issue of Wholphin contains an accompanying booklet featuring interviews with the selected filmmakers that is worth the price of admission alone. But when you combine that with the DVD itself… it’s a lovely reminder that not everybody is ready to abandon artfully crafted hard copies for the faster, cheaper route of exclusively digi-distro. That’s why the realization that a handful of the following films are available for viewing for free, right now, online, shouldn’t make you feel like you don’t need a copy of Wholphin for yourself, because you do. And now I’m going to tell you why. 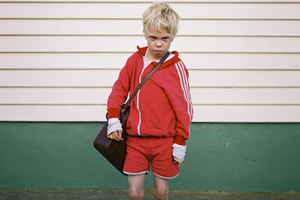 The Six Dollar Fifty Man (Mark Albiston and Louis Sutherland, New Zealand, 15m) — This coming-of-age drama, set in the 1970s, has won awards just about everywhere it’s played (Cannes, Sundance, etc.). When you watch it, you’ll know why. Albiston and Sutherland do everything well as directors here, but it’s the miraculous face of newcomer Oscar Vandy-Connor that steals the show. The Six Dollar Fifty Man is one of those rare treats that recalls the best short fiction, balancing humor and drama seamlessly, and creating a wholly convincing world in the process. Side note: the thought of this kid and Thomas Turgoose appearing together on screen makes my head want to explode. (Watch the trailer here.)

Bitch Academy (Alina Rudnitskaya, Russia, 18m) — Usually my pattern with each new Wholphin release is to watch the films in one sitting, and then crack open the book to read the filmmaker interviews in the same order that I watched them. But this time when the last film ended, I shot directly to the interview with Rudnitskaya to confirm that this was, in fact, a real class and not some flawlessly realized pseudo-doc. Shockingly, it’s the former. If you want to watch perfectly attractive Russian women paying good money be ‘coached’ by an assured psychologist (Vladimir Rakovsky) in order to learn how to make men bow down at their feet, then Bitch Academy is for you.

Plastic Bag (Ramin Bahrani, USA, 18m) — This was my second viewing of Bahrani’s audacious epic of a short (beautifully shot by Michael Simmonds), in which Werner Herzog brings the innermost thoughts and desires of a plastic bag to life with his inimitable voice. Thankfully, Bahrani injects a sense of humor into this borderline preposterous concept, along with a splash of heart (we are talking about a plastic bag, after all). To my warped eyes, Plastic Bag plays like a mischievous riff on one of my favorite short films ever, 2008’s Glory At Sea (Wholphin No. 7), though I’m probably just reading into things. And for those of you who can’t wait until your issue arrives, you can actually watch it right now on the Future States website.

Dock Ellis & The LSD No-No (James Blagden, USA, 5m) — I can’t remember how many times I’ve watched this absolutely incredible retelling of one of modern sport’s most mind-shattering miracles, because I’ve watched it a lot. Blagden’s comically trippy animation compliments the film’s soundtrack, in which former Pittsburgh Pirates pitcher Dock Ellis hilariously recounts the day he pitched a no hitter while tripping on acid. Toward the end of the film, Ellis reveals that he abused drugs to cope with the pressure of being a major league athlete and not to become a better pitcher. For anyone who’s ever ridden the LSD roller coaster, it’s quite obvious that LSD is not the drug to take if you want to feel ‘in control’ of anything. Actually, this short is also streaming online and I’m embedding that mofo. It’s too good not to:

Wolf Ticket (Dugan Beach, USA, 8:30m) — After Dock Ellis & The LSD No-No, I was actually dreading pressing play on the next film on the Wholphin No. 11 menu, for Dock Ellis’s energy and charisma is so powerful that you want to hear him keep talking. Apparently Hoff and Doe agreed with that sentiment, because Wolf Ticket is also about… Dock Ellis! This time, Ellis recounts the infamous details surrounding his ongoing feud with Reggie Jackson in the 1970s. Pitching (while drunk on vodka) during an all-star game, Ellis gave up a massive home run to Jackson. When something else Reggie did got Dock’s goat, Dock resorted to beaming him in the head in a subsequent game (here, he boldly confesses to being upset that he only broke Jackson’s glasses and not his jaw). Beach hints in the booklet’s Q&A that he has more incredible footage of Ellis that he’s developing into a feature. Bring that bad boy on right now.

Out of Our Minds (Tony Stone, USA, 33m) — Speaking of Glory At Sea (see above), Out of Our Minds will forever remind me of one of that film’s producers, Dan Janvey. At the 2009 Sarasota Film Festival, where Janvey was first encountering Tony Stone and Melissa Auf Der Mar’s time-traveling, Viking throat slicing, lumberjack tree slaughtering, rock-and-rolling, wholly ass-kicking multimedia collaboration, Janvey unleashed a loud, uncontrollable “OH. MY. GOD” when the final credits had rolled. He’s right. Ooom is an audacious, enthralling achievement that must be seen to be believed. Oh yeah, when you watch it, be sure to watch it loud. (Official website)

Young Love (Ariel Kleiman, Australia, 7m) — In only seven minutes, Kleiman delivers a stylish, charged, and laugh-out-loud funny metaphor for the flaming beast that is young love (think Bela Tarr’s The War of the Roses). The less said about this one, the better. Just get ready for some twisted fun. (Visit the official website here.)