Comedy
Drama
In Theatres
On the Festival Circuit

. Visit the company’s official page for the film to learn more.)

Four years in the making, Sergey Dvortsevoy’s Tulpan feels like an act of God. Only God didn’t direct the film; Dvortsevoy did. To experience it, one might not be so sure. Tulpan is a natural symphony disguised as a sweet-natured folktale. As the conductor, Dvortsevoy controls the most unruly elements of nature—weather, animals, and children—as if they’re puppets on a string. Under his directorial wand, actual dust tornadoes spin, lightning strikes to perfection, a camel performs a choreographed chase, a goat comforts a man with a kiss on the lips, a baby chases after his uncle then stops to play with a turtle, and a sheep gives birth on cue. It’s a daring feat, but Dvortsevoy pulls it off. Contrary to how this might sound, he isn’t doing this just to show off. He wants to challenge himself as a director and present the most authentic footage as possible. On the surface, this is all at the service of a simple, humorous tale. But combined with Dvortsevoy’s brave approach—a battle against nature that recalls Herzog at his most defiant—Tulpan becomes something much more precious and exciting.

Before going any further, it must be pointed out that the most miraculous moments captured in Tulpan weren’t planned, at least in a traditional sense. They certainly weren’t accidents, either. If just one of these appeared on screen, they could be dismissed as the latter. But Tulpan is filled with so many long takes of orchestrated nature that it becomes evident: this was all part of Dvortsevoy’s design. His background as a documentarian (Paradise, Bread Day, Highway, In the Dark) has left him with a burning need to be as honest as possible at all times. Throwing his non-actors into this environment, he has them reacting to situations on an instinctive human level, in much the same way that his animals are simply doing what they do. Dvortsevoy’s gift is using this non-fiction filmmaking element to give dazzling life to an otherwise fictional tale. While this is why the film took four years to make, it is also why it feels so impossibly, daringly alive.

The story is simple. Asa (Askhat Kuchinchirekov) has just completed his naval service and has returned to the Kazakh steppe to live with his sister, Samal (Samal Yeslyamova), her shepherd husband, Ondas (Ondasyn Besikbasov), and their three children. Asa has a simple dream: to control his own herd of sheep. But his boss won’t grant him this wish until he gets married. Unfortunately, in this desolate, empty part of the world, there is literally only one potential young woman available. Her name is Tulpan, and it appears that she isn’t interested in Asa because he has big ears. But Asa won’t give up on his dream, even when all appears to be lost. 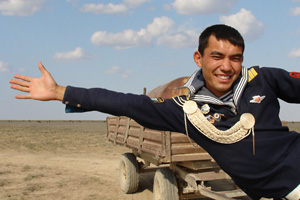 Tulpan’s refreshing sense of humor is life affirming, not condescending. From the very beginning, this is clear. As Asa and his gold-toothed friend Boni (Tulepbergen Baisakalov) celebrate Asa’s impending marriage to Tulpan—which Ondas will quickly deflate by breaking the bad news to him—he shouts, in reference to the landscape surrounding him: “Look at what beauty!” At this point, Jola Dylewska’s camera pans from Asa and Boni to see what they see: miles upon miles of absolutely nothing. But then, as the tractor continues to roll and the camera continues to pan, a herd of camels emerges, wandering through the emptiness. At that moment, Asa is right. It is beautiful. Dvortsevoy establishes at this early moment that he isn’t laughing at his characters. He shares in their naive enthusiasm for life.

I have had discussions with individuals who found Tulpan to be far less riveting than I did. Some of them even used the b-word. This has caused me to reflect upon my own viewing sensibilities and to try to express why a movie like Tulpan provides me with such a visceral thrill at every single moment. With this type of filmmaking, the bigger picture doesn’t matter as much, for each and every shot is a complete movie unto itself. As a filmmaker, it’s impossible not to notice that most of these shots are occurring in unbroken takes, and that almost all of the action transpiring feels like it was impossible to direct, the frenetic, yet somehow orchestrated, cacophony of nature and animals and children and real people moving within the frame. Someone else I talked to said something to the effect of, “Well, if you shoot enough, you’ll get those moments.” But I disagree. It isn’t that easy. Dvortsevoy is committed to his vision in a way that few filmmakers are—even those we like to think of as the biggest maniacs. And not just in the way of building huge sets and staging huge battle scenes. I challenge anyone to capture a shot as glorious as the one in which a flock of sheep sweeps through the left side of the frame, at which point a few donkeys run off into the distance to mount one another, at which point a tiny white puppy wanders into and settles in the bottom right-hand corner of the frame, at which point a tiny child runs directly into the center of the frame, looking at the donkeys, looking at the sheep, looking at the dog, then listening to his mother calling from off-screen and wandering back in her direction. If that shot doesn’t flood you with joy, for cinema, for life, for everything… well, then, nothing will.