After exploring the reckless lives of youth in Enter The Void, Love, and Climax, Gaspar Noé returns to devastate us with a look at the inevitability of getting old and dying. In Vortex, which had its world premiere at last year’s Cannes Film Festival, Noé gives a near claustrophobic, but heartfelt portrait of an elderly couple facing their own mortality. It stars legendary Italian auteur Dario Argento and veteran French actor Françoise Lebrun as the couple at the center. Shown mainly through split screens, Utopia picked up the North American rights last summer and will open it in theaters on April 29.

In this review from the New York Film Festival, HtN said “In his most somber and restrained film yet, Noé reminds us that pain and suffering are within reach, if not inevitable. Vortex is a new achievement for Noé, and in a way, a striking expansion of his cinematic universe.” 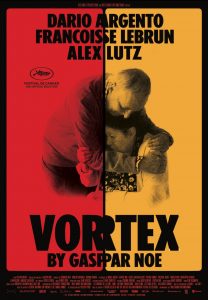