(Somers Town is being distributed in America by Film Movement. It opens at the Film Forum on Wednesday, July 15th, where it will be screening with Sally Arthur’s five-minute short A-Z. Visit the film’s official UK website to learn more.)

Screen presence can’t be taught. Take Thomas Turgoose. It jiggles the mind to consider that the adolescent, nonprofessional Turgoose wasn’t cast until the waning stages of pre-production for Shane Meadows’ This Is England, for Turgoose’s big-screen debut was more than just an impressive display of child acting; it was star-making. With his sad, drooping eyes, Turgoose exuded a simultaneous air of bitter, hardened adulthood and innocent, fragile youth. Yet it wasn’t just his face that conveyed such unteachable layers of paradoxical emotion. His delivery was also a wonder to witness, a natural blend of humor and drama, of sweetness and toughness. In Somers Town, Meadows’ outstanding follow-up to This Is England, Turgoose confirms that his debut was no fluke. This young man is the very real deal.

Unlike This Is England, Somers Town is set in the present, though Meadows’ decision to shoot it in black-and-white adds a timeless aura that makes it feel like it, too, could be transpiring in the mid-1980s (or 1970s, or earlier). And unlike so much of his previous work, Meadows abandons his reliance on violence to tell a warmhearted story of a budding friendship between a young Polish immigrant, Marek (Piotr Jagiello)—who has relocated to London with his father, Mariuz (Ireneusz Czop)—and Tomo (Turgoose), a teenager who has fled his Midlands hometown out of boredom. After Tomo is mugged early on (there is some violence, after all!), chance connects him with Marek, a lonely picture taker who is smitten with a French waitress named Maria (Elisa Lasowski). One look at her and Tomo is smitten too. Typically, this set-up might lead to a bitter confrontation of some sort, but Meadows takes a refreshing approach by having Marek and Tomo unite in their quest to win Maria’s heart. The only friction he’s interested in pursuing is temporary, comic friction, of which there is much to be found. 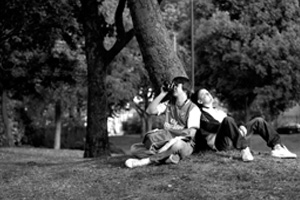 The interplay between Turgoose and Jagiello is laugh-out-loud funny, but what makes it so charming and sweet is that it’s coming from such a fragile, loving place. Meadows is clearly not out to make a political statement with regards to the friendship that develops between these two young men: one, a native Englander (albeit a displaced one), and the other, a barely English-speaking immigrant. Somers Town isn’t a work of social or culture commentary, either. It’s a story about being an adolescent, feeling utterly alone, and then forging a brief, but poignant, connection with a similarly lonely soul.

Another way in which Meadows shirks realist British cinema’s tendency for bleakness (Naked/Nil By Mouth/The War Zone/etc. routine: after Tomo and Marek suffer a mutual heartbreak, they drown their sorrows in wine and proceed to trash Marek’s apartment. When Marek’s dad comes home, one waits for the situation to get bloody. But it doesn’t. The conflict is resolved the next morning with a quiet, heartfelt exchange between father and son. Thank you, Mr. Meadows.

Much has been made of how Somers Town came to be. Commissioned and sponsored by the Eurostar train line—an opportunity that Meadows at first rejected before he found a way to creatively justify the endeavor—the film has a blatant corporate tie that might threaten to make the most indie-minded film lover balk. But that would be unfair—and a big mistake—for even though Meadows fulfills his Eurostar requirements with overt acknowledgments of the nearby train station as well as an eventual journey on the train itself (a dream? reality?), these moments don’t feel like mere product placement. (Still, it would be nice to have not known that bit of information before watching the film, as it does cause for a minor distraction.)

At just under seventy minutes, Somers Town progresses with directness and simplicity. This is not only a reflection of Paul Fraser’s concise, brisk script, but it’s realized through Natasha Braier’s cinematography as well, which favors masters over traditional coverage. Meadows understands that for a sweet-natured story such as this, understatement is the way to play it. In Somers Town, he and his actors play it oh-so-very-very well.