and DVD, or you can watch the whole thing below, for free, right now.)

It feels a tad ironic that in this rapidly evolving world of film distribution, Whit Stillman’s Oscar-nominated debut, Metropolitan, is one of the first, most critically acclaimed features to become available for free viewing online. The newly formed Cinetic Rights Management brokered the deal with Hulu, and the result is a pretty enticing concept: simply press play and watch a classic independent film in its entirety, just like that (albeit with short commercial breaks every ten or fifteen minutes). Metropolitan harkens back to an earlier era, not only with regards to the film’s content—characters who themselves wish they were living in an earlier time—but as a relic of a distribution system that appears to be on its way to the shop to exchange its previous mode of exhibition for a new model (the film remained in theaters for seven months and earned almost three million dollars at the box office, something that almost certainly would not happen now). Whatever the case, watching Metropolitan almost two decades after its emergence, it is easy to see why it has been labeled an independent classic.

Nearly twenty years later, Stillman’s debut is as impressive as ever, a nearly virtuosic display of screenwriting at its sharpest and most crackling. By focusing on a group of wealthy young New York hyper-intelligentsia during debutante season, over-privileged elitists who have a serious hankering for the better ol’ days, Stillman did more than just turn a refreshing, novel concept into cinematic reality. In any other situation, this dialogue simply wouldn’t play. But in the mouths of these self-professed UHBs (Urban Haute Bourgeoisie), it feels impossibly natural (credit must certainly be given to the young, unknown cast, especially soon-to-be Stillman regulars Chris Eigeman and Taylor Nichols). The constant banter reaches a state of verbal pyrotechnics, as these Ivy League-educated socialites bicker about literature and history, discuss matters of love, and yearn to be part of a society that appears to be fading into the bookshelves. In lesser hands, this would feel like insufferably bad theater. In Stillman’s, it becomes a major lesson in how to write really, really well. 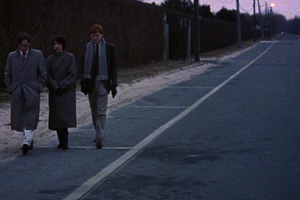 What distinguishes Metropolitan from other comedic glimpses into this exclusive, bourgeois world is that Stillman isn’t here to mock or condemn his characters. He isn’t out to defend them either, necessarily. His allegiances lie somewhere in the middle. He makes sure to point out the absurdities of this elitist mindset, covering it from every angle (namely with the inclusion of Edward Clements’s skeptical new recruit Tom Townsend), but he also infuses the characters with a genuine sense of sadness and humanity (namely Carolyn Farina’s Audrey Rouget). Just when you think these people are clueless, spoiled preppies with no souls, Stillman hits you with a moment of genuine sincerity that catches you off-guard and keeps you from writing them off completely. This tightrope act is just one of the film’s many pleasures.

In a pleasant twist of fate—oftentimes the opposite is true—time has added a measure of intrigue to Metropolitan’s already unique charm. Stillman’s decision to establish an ambiguous period flavor with his production design and overall sensibility creates a strange alchemy. For in that sense, the film was dated to begin with. Yet two decades of age has added an unavoidable natural datedness to the proceedings. Now, it actually is dated. But somehow, because it was dated all along, it doesn’t seem as dated as it might have had Stillman firmly rooted his film in 1989. A strange concept, to be sure, but one that nonetheless adds to Metropolitan’s allure.

While it doesn’t deserve the comparison, it is impossible not to watch Metropolitan now and compare it to the newer generation of low-budget independent cinema. Whereas many filmmakers in this community prefer on-camera improvisation to actual script writing, Stillman clearly belongs to a generation devoted to the art of carefully constructed language (his name isn’t Whit for nothing). Without solid direction of even more solid actors, the greatest script could falter. But Stillman’s greatest achievement with Metropolitan is his ability to turn the promise of an exceptional screenplay into a dazzling winner of a movie. Aspiring filmmakers, take note (i.e., don’t stop writing).