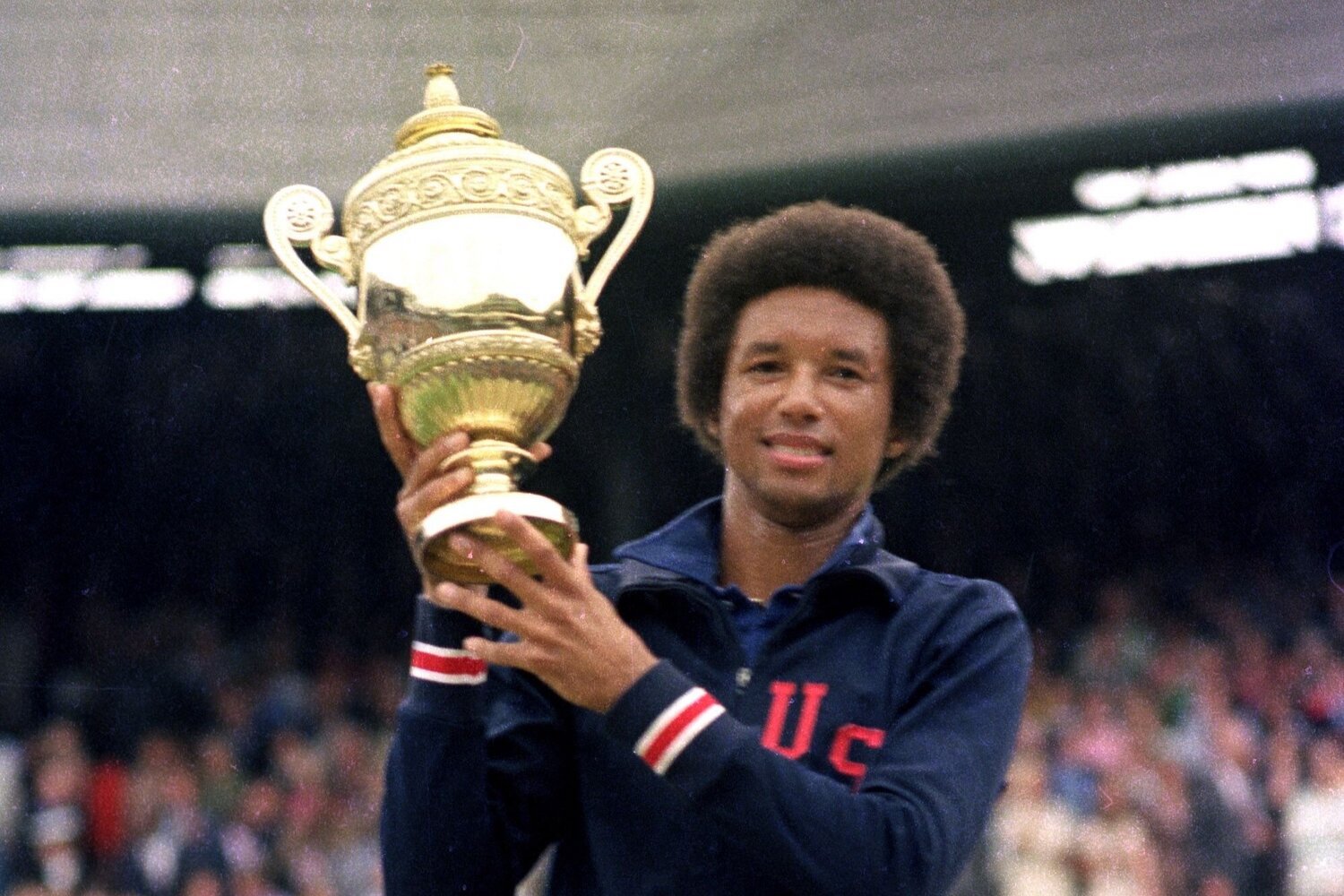 (DOC NYC’s 12th edition will take place in theaters and online November 10-18, 2021. Hammer to Nail has the fest covered so stay tuned for tons of reviews! Like what you see here on Hammer to Nail? Why not give just $1.00 per month via Patreon to help keep us going?)

The great Arthur Ashe may have died tragically far too young, from complications related to HIV, which he contracted via a blood transfusion, but he left an indelible mark during his almost 50 years among us. The first Black tennis player to be ranked No. 1 in the world and not only the first Black player to win the U.S. Open, but also the first man to win the U.S. Open, period, in its first year, Ashe was far more than a collection of “firsts.” He was also a civil-rights leader, an intellectual, a Davis Cup coach, a husband and father, and a lot beyond that. Much of his life is on display in the new documentary Citizen Ashe, from directors Rex Miller (Althea) and Sam Pollard (MLK/FBI), that chronicles his rise to sports stardom and how he grew into his role as humanitarian statesman. It’s a profoundly compelling watch for all of its 94 minutes.

Born in Richmond, VA, in 1943, Ashe was raised in the segregated south by a loving, if stern, father determined to make sure that both his boys would survive into adulthood and thrive. Young Arthur early on demonstrated skills in the tennis realm, aided and encouraged by Dr. Robert Johnson (coach to Althea Gibson) in his Junior Development Program. Johnson insisted that none of his players ever display the slightest emotion on the court, knowing full well that the white teams against which they played would seize upon any perceived infractions to argue for disqualifications. In other words, there could be no one in the mold of future (white) bad boy John McEnroe, who appears in the documentary as an interview subject, since Ashe would later compete against him on his way out of the circuit and then coach him in the Davis Cup.

Almost preternaturally calm, Arthur Ashe was the opposite of a McEnroe, which in the 1960s set him apart from more militant athletes and activists like Muhammad Ali and Kareem Abdul-Jabbar (who, we learn here, called the seemingly passive Ashe “Arthur Ass”). He would eventually arrive to the same destination as those who got there before him, but first there was tennis to play. His heyday coincided with the rise of the Open Era and establishment of pro tennis in 1968. That’s the year Ashe won the final at the new U.S Open tournament. It would take him until 1975 to win Wimbledon (becoming, that’s right, the first Black player to do so), playing opposite the far more brash Jimmy Connors (who was actually suing Ashe at the time for reasons best left for the documentary to explain).

And how did he beat Connors, who had always bested him before? Through his talent, for sure, but mostly through his brain, which he used to devise, with the help of friends, a solid plan to take down his nemesis. This is just one of the wonderful series of anecdotes that enliven the movie. Also part of the fabric of this vibrant cinematic tapestry are stories about his military service, including how his brother Johnnie signed up for a second tour in Vietnam to keep Arthur out of combat; his marriage to Jeanne Moutoussamy-Ashe, a noted photographer; his acceptance of his role in combating racism; and more. Miller and Pollard mix and match their archival footage and present-day interviews to produce a poignant, entertaining tale about a vital 20th-century figure.

And at the center of it all is Ashe, himself, whose voice and likeness appear more frequently than anyone else’s, given how much recorded material there is of his life. Always thoughtful—well, except for the casual sexism he espoused, all too common among men of his generation, before meeting Jeanne—Ashe had a natural charisma that the camera loved and still loves. His health problems in the late 1970s and early 1980s are what led to his need for that fateful blood transfusion, but though his heart was sick, it was never not generous, and it is that spirit that makes Citizen Ashe a beautiful portrait of a deeply missed citizen of the world.